In Des Moines, Iowa, a little band of faithful followers of and workers for Truth are "leavening" a large "lump" of error. There is not a student of our Teacher among them; but the Bible, and Science and Health have proved their acceptable guide, interpreter, and friend throughout. At their Sunday meetings, after reading Science and Health, anyone speaks who wishes so to do. This is followed by a study of the Bible Lessons. During the week they meet also for the study of these lessons with the light of the Bible and Science and Health thrown upon them. They are strong in the Science and will "stand in the evil day." They deserve hearty encouragement and commendation.

In Omaha and Council Bluffs, also, the work seems steadily gaining ground. Slowly, but surely it is undermining error.

In Colorado the work is beautiful! I think I can safely say that the entire State is in the domain of Science. A sister at Buffalo Springs has taught classes in many of the smaller towns; and the unity and harmony with which her students work is enough, in itself, to exclude error entirely from that locality. A grand work has been done in Denver! In November last, the present pastor felt himself fortunate to speak to an audience of nineteen. To-day, a larger hall regularly seats two hundred at Sunday services; all of whom are drinking in the "water of Life," and eating "that bread which cometh down from heaven," — and which can be broken to them in the "way of His appointing," only by faithful students.

In Texas, the Science is generally in demand, and there arises a cry for students as teachers. In Fort Worth they are hungry for the Truth; and certainly a teacher should be sent here. I hope a capable, genuine Scientist who can stay at least six months, may speedily locate there. Leaving students immediately upon teaching them, while yet in their infancy, seems as inhuman as for a mother to desert her helpless, new-born babe. Our instructor, Science and Health, tells us: "This is Divine Science, that Love cannot be deprived of its manifestation or object." It does seem that a teacher should imitate the example set, and watch over students after they are first taught, as Love keeps watch over Its own.—A. D.

Your circular meets with my wishes exactly. That little tract is just what the people need. I brought it up after meeting today, and you may count on us for an order very soon; in a few days I think. I want at least half a box myself, for immediate distribution.

The doctors here are in league against us. One doctor lost two cases of diphtheria and, to cover his ignorance, published an article to the effect that the parents trusted too long to Christian Science; thereby sacrificing the children. The parents in both cases have refuted the charge, saying their children never had a treatment in Christian Science. This has created quite a sensation, and the people are beginning to notice how unscrupulous doctors are in their false accusations. The latter grow very bold, as they are driven to the wall.—B. P., Le Mars, Iowa.

My correspondence in Christian Science brings the sense of Truth girding the earth. To-day, I have a strong Science letter from Paris; another comes from the far West; and still another full of triumph from a Southern worker. Now, I am writing to Ireland. Our tracts are enclosed and travelling with each one sent out. My thought also reaches a dear friend in India — a missionary, physician to the Rajah, whom the leaflet entitled, "The Way to Begin Christian Science," is now inducing to look into the truth. In a day or two, I hope to mail some German leaflets to Berlin; also to other Germans here who are eagerly watching for them.—D. K., Albany, N. Y.

Have been reading Science and Health for one year and a half, and have had some wonderful demonstrations. People here are very antagonistic to the Science and tell me I am a "fit subject for the asylum." Physicians, also, threaten me with arrest, but I walk straight on, knowing well in Whom I trust.—E. I. R., Wasueon, Ohio.

Christian Science is prospering here, and our numbers are steadily increasing. I hope soon to send for some extra copies of the December Journal and the Series. How grandly the work is going on!—B. M. P., Bloomington, Ills. 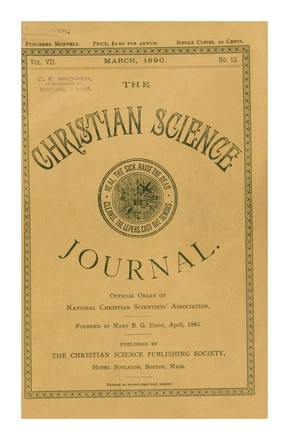 The following is a clipping from the National Israelite, the...

THE CHURCH OF TO-DAY

CHRIST AND THE LITTLE ONES

I was entertained in New York, last winter, at the home...

Little Bessie had a belief of a cold, and I told her to treat...

Dear Journal: — It is impossible for me to keep still any longer

Healing and Reports of Cases

A little over two years ago, while living in Pittsburgh, my...

Last April, one of my neighbors came to us for a few days'...