Is Science and Health translated, or to be translated, into the German language? How I desired such a copy in Berlin! where the opportunity was offered me, in connection with my landlady, to introduce Christian Science to her—the first she had ever heard the term used. Notwithstanding the apparent limitation of foreign language, she knowing but little English, we began the reading from "Recapitulation." There was a willing state of mind, and a consciousness of the presence of Spirit, giving light and understanding. One idea after another was presented, standing out beautifully to her apprehension. Then the uncompromising statements succeeded—contradicting every belief of a so-called life time. These were met with astonishment, and mortal-mind denial of their truthfulness; but, when the statement was made and proved that only from the standpoint of Christian Science are spiritual facts known—this was a revelation! A fortnight of occasional readings seems all too short; but, on coming to Dresden, I left with her the only German tract, "How to Begin in Christian Science," together with a copy each, of Rudiments and Rules, and No and Yes, in English—intending, later, to send to London for a copy of Science and Health. She would require, according to her sense of things, some assistance in English to progress much; but I have already ordered a copy of Science and Health to be sent from London to Berlin, not knowing of any translation from it in German.

The Bible Lessons we find to be of great value, supplying in part the need we feel of having the correct view of the Scriptures presented. I would like to express my gratitude for the help and strength received from them.

There are ten active demonstrators in our association, and we each have all we can do. We are greatly antagonized by the ministers of the gospel, but have assured them that the Truth has come to stay. We have had over one thousand cases come for treatment, and there have been some marked cases of healing, though we are still scoffed at by the pulpit.—Mrs. O. C. C., St. Cloud, Minn.

For the past eight months I have been in Edinburgh, and beyond. Most of the people whom I have met say that they like to read the tracts, and that they do enjoy the Journals; but they seem to doubt that healing can be done. A short time ago, I met one who seemingly has been suffering for seven years. He said he wished the days of Jesus would come again. I told him that Christian Science was the same teaching and healing; but he replied that he doubted that very much. Several copies of Science and Health, which I brought with me, I have left at different places to be read. One lady told me: "I have got more light from Science and Health than I have found in the Bible. No doubt it is a good book." A gentleman whom I met the other day, also said: "Science and Health no doubt is a good book. The more I read it, the more light I get." One gentleman has been studying it since last June. Others, again, will say: "I have not much time for reading or study. I see it will take a great deal of study to understand it right."

We have a Church Home, open every day in the year. Within the "sacred precincts" of this simple Home, Truth unbinds the shackles, and sets the captive free; weary wanderers seeking rest that Love alone can give, are lifted up and strengthened.—M. C.

I came to this place one week ago to-day, and commenced talking Christian Science. I had previously given a few thoughts of Truth to an acquaintance here; who, being interested in our theology, invited me to come; and I am happy to feel that the little leaven of Truth brought is already at work. The husband of my hostess was complaining of rheumatism. I only talked and held thoughts against the beliefs—for Truth—but the next day after I came he told his wife that I had been treating, for he was relieved of all pain in his hip. I explained, the best I could, the working of Truth; and told him that I had not treated him personally. He then wished me to treat him, and others requested it. I now have five patients, and people are becoming interested and anxious to know the Truth. Last evening I went to church. As I went, I realized that God was ever present and omnipresent; and that good must be the result of my going there. The text for remarks was, "Come and see," found in the first chapter of John. I realized a good opening for the work of Truth, and that to "come and see," would be to accept eternal Life. This morning I called upon a friend to whom I had loaned reading, and talked of this glorious light,—and there I met the minister to whom I listened last eve. He was about to leave on business for a short time; but, saying he would soon return, asked if I were from C., and expressed a desire to see me again. After he went, my friend said he was very anxious to talk with me about Christian Science, as he never had had opportunity to discuss the subject. I have promised to meet him this afternoon, and hope and trust I shall be guided by the Infinite Mind,—Life, Truth and Love.—Mrs. F. A. C.

The work is going on here peacefully and surely. The little flock do not hear even the distant rumbling of division or misunderstanding. They are learning to live the Truth as set forth in Science and Health. I have sold, in the year-and-three-months I have been here, about one hundred copies. We like the Bible Lessons very much. Beside our student meetings and Sunday public meetings, our Bible Class and Sunday School, we have a Science and Health class, that meets once a week. We study Science and Health in the light of its own interpretation: that is, we seek in the book for the words it uses. It is a means of wonderful growth in the Spirit, and is a wonderful a helper in daily work.—J. F. K., Seattle, Washington.

For a time everything seemed so dull, nothing doing, that I cried out in my heart: "O, for something to do in the work, no matter what!" Then came the call for one dollar to send for literature to distribute among the public. I really did not know how to spare that dollar, as I needed it for so many things,— yet I had gotten my desire. The literature arrived, but what on earth would I do with so much! It seemed I had given tracts to almost everybody, so there was really no one to give them to. I finally divided with a Christian Scientist living three miles distant, to enable her to distribute in M—. I then put up in small packages Journals, Series, &c., and started out with, I confess, rather a timid feeling. I treated for "fear," and the timidity left me. My first call was upon a "High Churchman." The rector answered the bell, and I handed him the literature as a Christian gift; expressing the hope that he would give it a careful reading, which he promised to do. Next, I stood at the door of a "Low-Churchman"—one who, a short time ago, preached a sermon against Christian Science—and I left a nice little package for him to read. After calling at both the Presbyterian and Methodist parsonages (ploughing my way ankle deep in snow to get from place to place) I reached home at eight p. m. I then prepared some more, which I addressed to other ministers upon whom I had not called, and mailed also to friends distant. After this, I went out nearly every day, and handed some to almost everyone I met. Now, what do you think! I haven't any left; and there are ever so many more whom I want to give to, right here in the city—to say nothing of the suburban villages two and three miles out. I cannot buy any more just now; but, if you will send me half as many again, I promise to have them distributed in little over a week. I know that of myself I am nothing, and can do nothing; but in God I am in All—and I thought you might like to hear about the work.—M.

Two years ago last October, we organized our Sunday school with nine in attendance—the largest number we could get out at that time. There are now over fifty who attend both Sunday school and other meetings, while the average S.S. attendance is over thirty. Our open Tuesday evening meetings assemble over twenty, weekly. We have organized a Church of Christ (Scientist) with a membership of fourteen, and several others will join at the first opportunity. We have twelve active students, and eight have gone from here into other fields.—H. A. K., Neb. 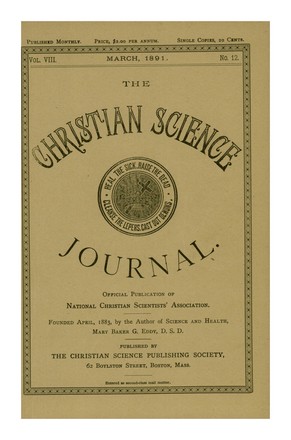 The God who made both heaven and earth...

A WORD OF EXHORTATION

with contributions from Phœbe Cary | March 1891

Jesus must have held a very different view of a little child...

In the study of the Bible lessons we were carefully taught by...

I was summoned, by telegraph, to a friend in a distant town

The first few words that were spoken to me on the subject of...

Twenty months ago I was a very miserable, unhappy woman

"How near we feel to Infinite Mind, as we behold the vastness...

The Marks of Love

Items of Interest to Both Readers and Contributors