In the book of Daniel there is recorded one of the best loved of all the Old Testament narratives,—a narrative which inspired an artist to produce on canvas two powerful conceptions of that thrilling episode in the life of the man whom King Darius designated "servant of the living God... whom thou servest continually." These two illustrations are popularly known as "Daniel and the Lions." In the one first produced, Daniel is shown looking down at the lions; in the other, he is looking up into the light which comes through an opening. Although his hands are bound, there is no suggestion of fear or of helplessness; his whole demeanor conveys the impression of calmness and tranquillity.

The Christian Scientist, who is ever striving to bring his thinking into subjection to divine Mind, finds great significance in these two different attitudes. It is not the purpose of this article, however, to go into detail regarding them, but rather to dwell upon the compelling feature of Daniel's trying experience,—a feature no artist could ever put on canvas, because above and beyond all human cognizance was the power with which this man of God was imbued, so that to his vision there was presented no trace of animal ferocity. A gifted artist may bring out much in the treatment of such a subject, so that certain mental qualities are forcibly depicted; but, at best, it can be done only in a superficial way, for such Godlike qualities as Daniel possessed can be depicted only through spiritual sense.

A Sunday school teacher was asked, in the classroom, what the power was that preserved Daniel; or, to put it in the words of the pupil, "What kept the lions from eating Daniel?" Instantly came the answer from another pupil, "Because he had no wicked thoughts." "That's it!" said the teacher. "And that means innocence." Then the verse was read: "My God hath sent his angel, and hath shut the lions' mouths, that they have not hurt me: forasmuch as before him innocency was found in me; and also before thee, O king, have I done no hurt."

It would be interesting to know something of the early life of this captive prince. We can picture the young child, carefully reared by loving and reverent parents, his thought guarded, guided, and molded through the ever watchful care of, perhaps, a devout and consecrated mother; instructed in the things of God, so that in his young manhood he was well fitted to meet and master the seductive and insidiously mesmeric belief of pleasure in the senses, and so to realize, even in his high station as a prince, that "the lust of the flesh, and the lust of the eyes, and the pride of life" held no enticement for him. We may be sure that Daniel learned to treasure innocence beyond all that the world could offer; for when in those sterner years in Babylon, through the wondrous wisdom which ever goes hand in hand with innocence, he was greatly favored by the king, and called upon to occupy a position next to royalty itself, not once did he surrender an iota of his purity of thought, although the mesmeric influence of the barbaric splendor and of the utter materialism surrounding him must have seemed very great.

The question comes to us as Christian Scientists, How do we measure up to such a standard of innocence as Daniel's? Can we say, after having been sorely beset by manifold temptations, "forasmuch as before him innocency was found in me"? Can we face the animalism of mortal mind, expressed in human will, hatred, jealousy, envy, self-righteousness, lust, and hypocrisy with the proved armor of innocence enfolding us, so that these lions, presenting to our vision nothing to stand aghast at nor yet to be ignored, evaded, excused, or endured, can find nothing in our consciousness upon which they can feed? If so, then we are scientifically stripping them of their boasted power, and in calm assurance of their utter nothingness we, too, may turn toward the light of Truth, and, in unbounded gratitude and deep humility, say, "Forasmuch as before him innocency was found in me; and also ...have I done no hurt."

One of the definitions of innocence given by Webster is "freedom from guilt or sin, especially through lack of knowledge." On page 590 of "Science and Health with Key to the Scriptures" Mrs. Eddy defines "knowledge" as follows: "Evidence obtained from the five corporeal senses; mortality; beliefs and opinions; human theories, doctrines, hypotheses; that which is not divine and is the origin of sin, sickness, and death; the opposite of spiritual Truth and understanding." Knowledge, then, being the antithesis of spiritual understanding, and innocence being freedom from sin through lack of knowledge, it is plain that understanding and innocence must be correlated, while knowledge and innocence are opposite qualities. The world in general lauds knowledge, believing it to be understanding, and is inclined to look somewhat pityingly upon innocence. It deems knowledge or worldly wisdom an essential, and does not hesitate to speak disparagingly of one who may be lacking therein; although, assuredly, this is not in accord with the Master's emphatic injunction that we "become as little children;" nor can it be measured with Paul's declaration that "the wisdom of this world is foolishness with God." Childlike innocence the world deems weakness; but then we have the further ringing statement of Paul, "The weakness of God is stronger than men."

It was that "weakness of God," that innocence of worldly wisdom, which so imbued the thought of Daniel that it made him superior to all that could be devised against him. It was that same attribute which enabled his three compatriots to lift their thought so far above all belief of life in matter that the fire into which they were thrown could consume nothing except itself, and which humbled the pride of King Nebuchadnezzar to the point of receptivity, so that he saw a fourth man in the flames "like the Son of God."

In the later centuries, when materialism became still more rampant, it was the essence of purity which so permeated the consciousness of the Virgin-mother that she conceived the immaculate Jesus, who, in turn, taught humanity how, through the acquisition of this quality of purity, they might "see God." It was the innocence of the great Master which enabled him to build the structure of Christianity upon the solid rock of spiritual understanding, against which, he said, "the gates of hell shall not prevail;" and when at length the so-called power of evil rose in its hatred of innocence, and tried to tear down that structure, how well he knew that the "weakness of God is stronger than men." Alone, he faced the "seven thunders" of mortal mind, despoiled these "lions" of their vaunted power, then turned his back upon them, and looked steadily and trustingly upward into the light of Truth and Love. So-called mortal mind thought it could annihilate innocence by nailing its great exponent to the cross; but even the grave itself could find nothing to consume in him who was able to say, "The prince of this world cometh, and hath nothing in me."

Again, after the centuries had rolled around, in the fullness of time there arose another who was destined to exemplify the power of innocence. How wonderfully was expressed by her whom God had prepared to be the revelator to this age the power of the spotless Christ to heal and to save! The world, judging only by its own standards, looked upon Mary Baker Eddy as a frail and delicate woman; but oh, what spiritual strength was revealed in the purity of her thought, which she proved to be immeasurably "stronger than men." Under the scorn and hatred of a world startled from its age-long stupefying beliefs in material religion and medicine, she bent at times as a blade of grass before the tornado, only to straighten and stand firmer and stronger than before upon the firm ground of spiritual understanding. Truly, this God-crowned woman treasured innocence beyond all else in her glorious diadem. Her writings teem with expositions of the power to heal, through the acquisition of this divinely Christlike quality; and in Science and Health she makes a statement which gives to her followers no alternative but to search deep, "and see if there be any wicked way" in them, when she so truly declares (p. 241), "The corner-stone of all spiritual building is purity."

This great Leader bearded in their den the seven lions of mortal mind, —the full round of animal magnetism,—beasts that would gladly have devoured her had there been an element in her which corresponded to themselves. For our sakes she, girded with the armor of innocence, ventured into evil's most secret and hidden bypaths, in order to prove our dominion when similarly accoutered. Then, shall not we who claim to be Christian Scientists strive to emulate her? The way is less difficult for us; for we do not have to probe, as she did, to bring these beasts from under cover. Although lions are in our path, they must not be feared, nor are they to be evaded or ignored, but faced and despoiled of whatever power they claim to possess. This is done as we turn confidently toward the light of Truth and Love, rejoicing, not so much because "the devils are subject unto us," but because our names are "written in heaven;" for we have learned to unsee evil,—to know its nothingness by realizing the allness of God, good.

Whene'er a noble deed is wrought,
Whene'er is spoken a noble thought,
Our hearts, in glad surprise,
To higher levels rise.

Honour to those whose word or deeds
Thus help us in our daily needs,
And by their overflow
Raise us from what is low! 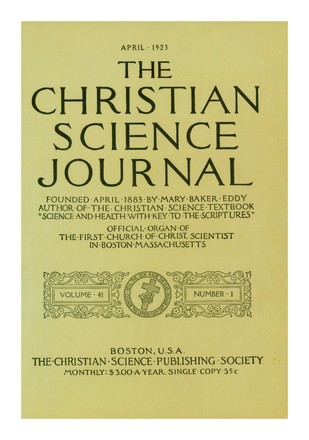 THE CHURCH OF CHRIST, SCIENTIST

A LESSON OF LOVE

"ONE THING THOU LACKEST"

NO REVERSAL IN TRUTH

It is now over eighteen years since...

Christian Science has healed me...

Having lived under the guidance...