YEARS AGO A HIGH SCHOOL swim team in our area always performed exceptionally well. One or two swimmers on that team consistently came in first during local, district, or state meets. When our team had an opportunity to visit this school and see the pool they used to practice in, we were amazed at the deplorable conditions. The pool was less than regulation size and not as deep as other pools. Those factors caused the water to be choppier and more difficult to swim in. On top of that, the broken ceiling over that pool not only leaked water into the pool, it also dropped in little bits of cement.

Those swimmers did not let less-than-ideal conditions slow them down one bit from doing the very best they could. What I learned from those swimmers and that pool has stuck with me ever since: Right motives, persistence, and determination, not ideal conditions, are the primary elements essential to success whether in a sport or any other worthwhile endeavor.

Many Bible characters faced limitations or less-than-ideal circumstances that attempted to derail their progress and success, but didn't. For instance, self-doubt confronted Moses when God designated him to lead the children of Israel out of Egyptian bondage. Yet he rose above that narrow view of his personal capacity by understanding that God would be at his side every step of the way. Job, who had for many years enjoyed an ideal life, later faced severe loss and disease as well as loneliness. Yet his persistent patience, forbearance, and prayer resulted in a complete restoration of good in his life. To this day, his success is a source of inspiration to those who know his story.

Looking at the life of the Apostle Paul, and his far-reaching and noble work in converting nonbelievers into committed Christians, it's easy to see that he did not do his evangelical work under ideal conditions. Besides being persecuted nearly everywhere he went by non-Christians for his Christian views, Paul's reputation as a former persecutor of the early Christians attempted to limit his success as a leader among the Christians! He also had a debilitating "thorn in the flesh" (II Cor. 12:7), apparently, a physical condition that he had not overcome. None of these predicaments stopped Paul from preaching the gospel and healing others.

Christ Jesus, even though blessed with a full measure of spiritual grace, enlightenment, and holy mission, also faced many less-than-the-best circumstances while carrying out his mission. When Jesus healed the sick some observers were in reverential awe. But others claimed he was a conspirator with the devil. In spite of the disbelief and ignorance of others, Jesus still accomplished his healing work, proving that his reflected power to heal and bless came from God. He was not hampered by the incredulity that hovered around him on his holy mission of bringing salvation to all who accepted his teachings.

Christian Scientists find great comfort in the courage and conviction of Mary Baker Eddy who strove tirelessly to bring the healing mission of Christian Science to humanity. In words that resonate with Biblical authority, she wrote about the obstacles that she did not let stand in the way of her efforts to free others from sickness and sin: "The lame, the deaf, the dumb, the blind, the sick, the sensual, the sinner, I wished to save from the slavery of their own beliefs and from the educational systems of the Pharaohs, who to-day, as of yore, hold the children of Israel in bondage. I saw before me the awful conflict, the Red Sea and the wilderness; but I pressed on through faith in God, trusting Truth, the strong deliverer, to guide me into the land of Christian Science, where fetters fall and the rights of man are fully known and acknowledged" (Science and Health, pp. 226-227).

Focusing on mission instead of circumstances, praying to keep the high goal of expressing God's nature as limitless good instead of looking at our own shortcomings or the incredulity of others—allowing ourselves to be guided by what we know as God's hand on our shoulder instead of the applause or boos of others—enables us to gain a measure of accomplishment commensurate with the rightness of our motives and God's loving guidance. 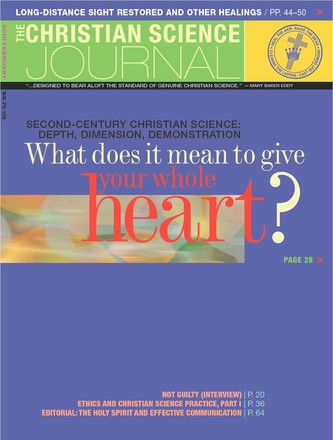 The Ten Virgins: More Light for Our Lamps

A JEHOVAH'S WITNESS told my parents...

'THE GREATEST AND HOLIEST OF ALL CAUSES'