Peace in bodies, homes, and governments everywhere might be said to rest upon the spiritual truth that we have no enemies. How can this be so? In the presence of God, who fills all space and is good alone, there can be no evil. But even where evil seems to be—if someone is hostile to us, for example—we can feel compelled to pray and to express greater love. This is a blessing. Challenges tell us that something needs healing. And this is an opportunity to glorify God, divine Love.

The Bible teaches that God is Love, and that it is our duty to express love toward our neighbor as well as toward any so-called adversary. Since the beginning of recorded history, people have listened to and obeyed the law of Love. Even before Moses received the Ten Comandments, Joseph naturally understood and demonstrated Love's law.

Joseph, the son of Jacob, who was the son of Isaac, who was the son of the patriarch Abraham, was betrayed by his jealous brothers, thrown into a pit, and subsequently sold into slavery in Egypt. Yet throughout his trials there he blessed others, and he rose out of slavery and into a position of great authority. Eventually, at a time of famine, and as a result of God-given wisdom and foresight, he was able to care for the needs of even those in his family who had betrayed him. Joseph proved the peace of Love. See Gen., chaps. 37-45

Long after Moses' era, Jesus of Nazareth, the Founder of Christianity, taught his disciples to follow his example and to practice Love's law. In his Sermon on the Mount he said: "Ye have heard that it hath been said, Thou shalt love thy neighbour, and hate thine enemy. But I say unto you, Love your enemies, bless them that curse you, do good to them that hate you, and pray for them which despitefully use you, and persecute you; that ye may be the children of your Father which is in heaven." Matt. 5:43-45

Jesus practiced such Christly love during his healing ministry and even while suffering on the cross. Obedience to his Love-inspired example has brought peace to families, communities, and nations for some two thousand years. Almost nineteen centuries after Jesus fulfilled his mission, Mary Baker Eddy discovered the Science of Christianity, which teaches the rules for demonstrating the healing power of divine Love, for proving the power of God, as the Master did, in the healing of physical troubles as well as sin.

The Science of Christ, or Christian Science, clearly reveals that God is not only the source of all genuine love but He is Love itself. He is the one Love, infinite Love, All-Love. Divine Love has no enemies. Love knows no foes. Divine Love is aware of its own pure, impartial, universal, patient, gentle, powerful, kind, merciful nature, its own enduring spiritual peace and affection. The nature of divine Love is unconditionally to express love and peace everywhere, just as the sun shines its warm rays impartially. And Love is reflected in man. In giving the spiritual sense of the Lord's Prayer as she understands it, Mrs. Eddy interprets the verse 'And forgive us our debts, as we forgive our debtors" this way: "And Love is reflected in love." Science and Health, p. 17

But how do we express divine mercy toward a so-called enemy, bless one who curses us, do good to someone who hates us, and pray for those who despitefully use or persecute us? Through Love's grace. And through exercising God-given spiritual sense, which enables us to see beyond the circumstances of the moment. God gives us the inspiration to reflect His love and peace. Our work is to stay inspired by divine Love by being receptive to it, and to live God's love. Our work is to cultivate a Christlike state of thought.

What are we loving? Not a mortal, either good or bad, but God and His immortal idea, man. We're loving the true nature of the individual as the perfect, spiritual reflection of divine Love. Why do we want to express such pure love for Love and its idea? To help and heal ourselves and mankind. To demonstrate universal peace, which characterizes God's creation. To be what we are made to be. To fulfill our divine destiny. To glorify divine Love as originating all the love and peace there truly is.

How do we bless one who curses us,
do good to someone who hates us?
Through Love's grace.

What is it that would say we have an enemy? Or that someone hates us or is persecuting us? We may call it an obvious circumstance, evident for anyone to see. And we may appropriately label it as animal magnetism, or evil, or mental malpractice. But ultimately we need to see it as simply a suggestion that something exists outside of infinite Love. We don't want to listen to or accept this fraudulent suggestion. Christ Jesus has already uncovered and proved the fact that an adversary is a lie, is nobody, is impersonal and spurious. And this is being proved daily through the practice of Christian Science. Why? Because God, Love, is absolutely All-in-all; He is everywhere. We don't have to make an enemy nothing—it already is nothing. And we demonstrate its nothingness by glorifying the allness and oneness of Love right where the suggestion of something else, such as an adversary, appears to be.

Even if the mental pressures are aggressive, divine Love can still the storm, silence the suggestions of mortal thought. God's love, felt in the quietness of prayer, brings to our thinking a calm and peace. Actively feeling, loving, and living the truth that we have no enemies destroys the apparent effects of believing in an intelligence or a power apart from divine Love.

Mrs. Eddy certainly demonstrated the Biblical command to overcome evil with good See Rom. 12:21 through many trials in the founding of Christian Science. One of her students remarked, "I can say one thing truthfully that if I were asked today after all my experience with our Leader [1914] which was the greatest of them to me I would say this: I always found her loving her enemies, always ready to do them good, always would see those who had injured her if she could help them even before one who had been loving and kind to her." Robert Peel, Mary Baker Eddy. The Years of Trial (Boston: The Christian Science Publishing Society, originally published by Holt, Rinehart and Winston, 1971), p. 380

The year 1890 was a period of spiritual progress and healing evolving within the Cause of Christian Science. Mrs. Eddy had recently resigned as the pastor of her church, dissolved her metaphysical college, disorganized her church— to be later reorganized and strengthened—and moved from Boston, Massachusetts, to Concord, New Hampshire to revise her textbook, Science and Health with Key to the Scriptures. It was at this time that she wrote her profound article "Love Your Enemies." This is where she writes, "'Love thine enemies' is identical with 'Thou hast no enemies.'" Miscellaneous Writings, p. 9 The whole article is a deeply moving and healing revelation of why we need to love a so-called adversary and how we can do so.

The revelation "Thou hast no enemies" was in accord with Mrs. Eddy's growing realization of the impersonal nature of all evil. She found that any human error must be the result of what St. Paul calls "the carnal mind," which he said is "enmity against God." Rom. 8:7 So any so-called enemy is only an impersonal belief in a power opposed to Truth and Love, opposed to the one God. But God is unopposed and unopposable, since Love is infinite—All.

A student of Christian Science learned the importance of understanding and demonstrating these truths at a time when he was working on a project with others. There were diverse feelings expressed about the project. Suggestions of discord and disagreement came aggressively to his thought. He prayed to reject these suggestions and to feel the peace of Love, but instead he started feeling pain in his body. Soon the discomfort was so intense that he had to lie down while praying for himself. He was grateful to be able to stay calm and to feel the peaceful presence of God somewhat. He suspected that the acute pain and illness was an attack of appendicitis. He called a Christian Science practitioner for spiritual treatment. The prayers of the practitioner brought much comfort. Soon the pain subsided, other symptoms stopped, and he got up and about.

The following evening, however, he was up all night wrestling with another phase of the illness. He had been without nourishment for two days, and this further depleted him. At one point, feeling severely dehydrated, he believed he might need to go to the hospital to be fed. But suddenly he felt such a deep appreciation for the Master, Christ Jesus, and for Mrs. Eddy, and for all those before him who had worked to heal challenges through Christian Science treatment. Understanding the importance of being able to think and pray clearly, he became grateful for Science and Health's provision for one to seek a surgeon's help to relieve pain if pain were so severe that one couldn't treat himself mentally. See Science and Health, p. 464 Right away an angel thought from God came that brought relief. He became thankful for the milk of God's Word. Then he felt led literally to drink some milk, which met his immediate need for nourishment. He continued with Christian Science treatment. In the next few days the pain, sickness, and debility were completely healed.

The sense of discord and disagreement related to his project was peacefully resolved also. The work was soon completed, as human resistance yielded to the divine will. Divine Truth and Love destroyed impersonal error and fear. The Christian Scientist felt he had been fully healed as the result of his coming to understand that in the oneness, allness, and infinitude of Love the conflict and sickness had never really happened. The peace and will of Love reigned. Surely they are always supreme, and enable us all to prove that we have no enemies. 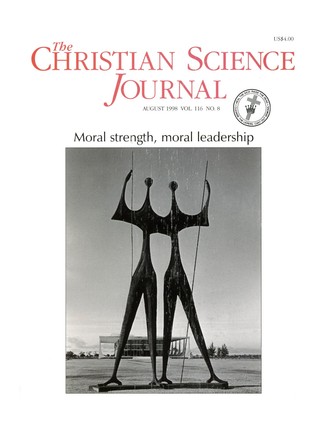 The impact of wholeness on morality and health

How do you combat torture?

From a dancer: loosening the grasp of fear

Don't be afraid to know what God is

Getting the most out of sports

with contributions from Jennifer Swan | August 1998

On the Way: the meaning of discipleship Identity and the transfiguration

Man—representing Life in its fullness

"I was glad to take on the work"

The original way of Christian healing