THE slight changes which have been made in the design of the seal on the cover of Science and Health and our Leader's other books, as well as on the Journal, Der Herold, and the Quarterly, have given rise to some speculation and inquiry, and the following extract from one of the many letters which have been received at this office indicates the nature of this speculation:—

"In view of the remarks I have heard in regard to the changed proportions of the cross and crown on the new cover for the Journal, I wish we might have an editorial setting forth the real signification of the cross. Is there too much looking for reward in proportion to the overcoming?"

Perhaps it is just as well to say at once that there is no intentional significance in the changed proportions of the cross and crown as redrawn, and that the artist simply made them of the relative sizes that seemed to him right and artistic. This artist is looked upon as the best man in his line of work in this country, therefore we may safely rest in the assurance that the proportions of the different parts of the emblem or seal are correct.

The only real difference between the former seal and the new one is that the crown now used is what is known in heraldry as a celestial crown, whereas the one formerly used was in fact not a crown at all, but a coronet, and possessed no significance when, combined with the cross. The celestial crown, or, as it is sometimes called, the Christian's crown, is the one described in Revelation, and it always has been emblematic of the triumphant life of the saints and martyrs. It can readily be seen that this crown is the one which should be used in connection with what has now come to be known as the Christian Science seal, and our Leader, in her desire to have the seal made truly emblematic of what it stands for, requested that the change be made.

To those of our readers who have been searching for some hidden significance in the larger cross, we may say for their reassurance that the cross which we are called upon to bear as Christian Scientists is no larger or heavier than heretofore. What we most need to impress upon our thought is that the crown has been brought nearer than ever through the ministry of Mrs. Eddy. 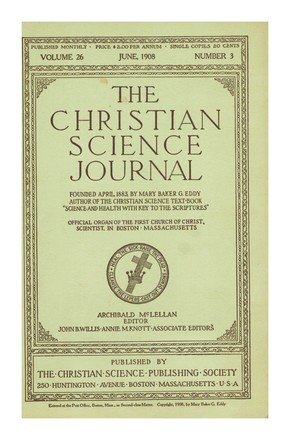 THE RIGHT WAY TO TRUTH

A LECTURE DELIVERED BY HON. CLARENCE A. BUSKIRK | June 1908

NEW CONCORDANCE TO SCIENCE AND HEALTH

JESUS THE MAN OF JOY

LETTERS TO OUR LEADER

with contributions from A. H. Dickey, Charles R. Corning, Charles B. Jamieson | June 1908

I HAVE now been in Christian Science for something...

Words fail when I attempt to express my gratitude to...

In submitting this testimony for publication my object...

Although Christian Science healing came to me in...

Between two and three years ago, I lay upon my bed...

For years I suffered intensely with headaches, the attacks...

It is indeed with a heart overflowing with gratitude that...

"It is a good thing to give thanks unto the Lord, and...

I bear glad witness to the healing and saving power...