My grandmother lived near the ocean in California, and one of my happiest childhood memories is playing in the surf at Big Corona. Sometimes we rode the waves on rubber mattresses or styrofoam boards. But I liked simple bodysurfing the best—jump up in a swell, start swimming, and let the wave carry you to the beach.

Timing was important, though. If you didn't catch the wave just right, it could flatten you. Even as a little girl, I learned the trick of diving under waves I wasn't going to catch. No matter how huge a breaker was, when I would dive under it I'd miss all the turbulence and force. Instead there was just a gentle rocking as the wave passed over me. Then I'd pop up to the surface again. Even the biggest waves didn't scare me once I knew how to get to that calm place.

I think of this often in relation to the waves of life—big ones like injustice, illness, rejection, or fear of any kind. There's a way to calm and safety, to what the book of Psalms describes as "the secret place of the most High." Ps. 91:1 In fact, the Bible gives many clear directions to this place, including this one from another psalm: "Be still, and know that I am God." Ps. 46:10

That can sound like an impossible demand when danger or loss is towering over us, but in fact all sorts of people have found stillness and safety in knowing God even under extreme circumstances. One example that inspires me is that of Massachusetts-born inventor and designer Buckminster Fuller. Recalling a time when personal tragedy and failure had led him to contemplate suicide, he said, "What seemed clear then was that I was going to have to ask myself very directly if I indeed had faith in a greater intellect and wisdom operating in this universe. And I said, 'Yes, I have.'" The Christian Science Monitor, September 23, 1983

While "Bucky," as he was universally known, wasn't religious in a conventional sense, that moment of faith, of stillness and acknowledgment, marked the beginning of a major turning point in his life. With a boldness reminiscent of Biblical demands, he decided that instead of suicide, he had to "commit egocide." J. Baldwin, BuckyWorks: Buckminster Fuller's Ideas for Today (New York: John Wiley & Sons, 1996), p. 5 For him, that included a single-minded determination to move beyond self-interest and totally devote himself to improving humanity's physical environment. In Christian terms, the highest idea of unselfishness is giving up a material concept of life for a spiritual, Christly one. This spiritual consciousness is the safety we all can find, and after the waves of materialism pass, we emerge whole and free.

Yet so often when we're facing a crisis, we feel that it's all up to us, and we're not sure we can handle it. Just admitting that there's a higher intelligence and power than ourselves begins to bring peace. We're not alone. God is infinite wisdom, and more wonderful still, this wisdom is infinite Love! God is always with us, and we feel the power of this assurance more as we understand the Science behind it.

In linking Science to Christianity, Mary Baker Eddy cited Christ Jesus' works as consistent proof of a higher intelligence—the supreme intelligence—that causes only good. Jesus' ability to restore physical and moral health demonstrated his understanding that this divine Mind, or God, produces nothing but unchanging perfection. Imperfection isn't rooted in the divine order, and can be overcome. Every Christian healing points to the reality that all creation is actually the perfectly ordered, wholly spiritual expression, or idea, of divine Mind. What could be safer than existing in eternal Mind as God's distinct, whole, and dearly loved idea?

Just admitting
that there's
a higher
intelligence
and power
than ourselves
begins to
bring peace.
We're not alone.

Thinking about these things is like finding the calm place under the waves. Even before you come up to the surface, you know you're safe. A friend gained this peace during a painful struggle with a debilitating illness. While she had periods of relief, her physical condition deteriorated until she wasn't sure she would survive. But she had chosen Christian Science healing, systematic prayer that trusts absolutely in God's omnipotent care She knew she was safe.

And, gradually, a turning point came. Through her prayers, and the support of others around her, she grew in conviction that nothing could ever separate her from God, the source of all true good. When we think of the good in our lives as dependent on certain human conditions or achievements, we never feel completely safe. But she was seeing that everything good is really spiritual, that is, it's included in our eternal relation to God. Whatever is pure, unselfish, honest, generous, or trustworthy is a manifestation of God, and can't be lost or taken from us.

She had a great desire to know God better, and to know herself as the very image of Love. She began to experience God's love as she strove to love everyone, including herself, from a more spiritual standpoint as God's image and likeness. She felt God's presence as divine Mind as she listened for and expressed more Godlike thoughts. During this time her relations with her husband and children strengthened considerably. She felt much more self-worth. Even before there was any sign of physical improvement, she found a greater calm and authority. Waves of fear just didn't overwhelm her anymore. And complete and lasting physical healing came.

There are elements in this experience that anyone can draw on to get to a place of calm and safety. One is that acknowledgment mentioned earlier that a higher intelligence and power exists, and that we are governed by it and can trust it. "Be still, and know that I am God." Another is what we might describe as an unselfing or dematerialization of our thinking. It's an earnest commitment to stop thinking and acting like mortal egos looking for happiness or security in materiality, and to devote ourselves to expressing God's goodness and love now wherever we are.

Even if it sometimes feels as though we just can't hold on to that spiritual perspective for more than a few minutes, the good news is that we actually can't help gaining it permanently. We're designed that way—to be forever at peace in God. The supreme wisdom of the universe has actually made us in His image, so it's only natural that spiritual truth and love win out in our hearts and minds. In a message to her students in 1902, Mrs. Eddy wrote: "O glorious hope! there remaineth a rest for the righteous, a rest in Christ, a peace in Love. The thought of it stills complaint; the heaving surf of life's troubled sea foams itself away, and underneath is a deep-settled calm." Message to The Mother Church for 1902, p. 19 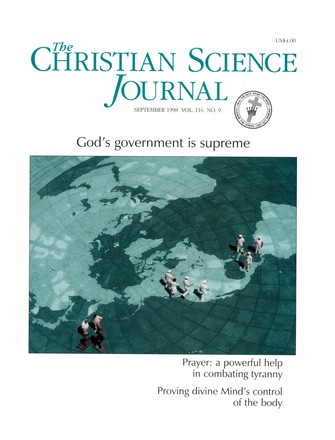 Taking the medicine of Mind

Witnessing the leaven of Truth in theology

"Miracles of patience and perseverance"

Chapter one or chapter two?

The universal law of God, good

Are you worshiping the "mortal me god"?

Can you have a relationship with God?

"as carefully as if I had been transporting the crown jewels"

On the Way: the meaning of discipleship Daring demons and true greatness