I married at a young age, and my life was very unhappy, as my husband was abusive. After 15 years, we divorced. A year later, I met a wonderful man. We married and I felt that my life was now complete. Yet, within a few short years, I found myself experiencing another troubled marriage. I then lost all hope that I could ever find happiness or feel truly loved. I became reckless with my life and began to suffer alarming symptoms of what developed rapidly into a debilitating illness, forcing me to leave my job. And so began my struggle to find healing. For the next two and a half years, I sought medical help, endured endless medical tests, and took countless prescription drugs. But my health continued to deteriorate. Finally, during one visit, the doctor told me that I had stomach cancer, and that this particular type could not be treated medically. I was terrified, to say the least.

For seven months following this devastating news, I continued to struggle. The physical symptoms continued to worsen. Not only was I filled with debilitating fear, I was unable to eat most foods, or sleep more than one hour each night. In my hopelessness and despair, I attempted to end my life by ingesting a full bottle of prescription sleeping pills. I was found by my husband in a coma and taken to a hospital where I was on life support for five days. The physicians attending me in the hospital felt almost certain that I wouldn't survive. My family was told that even if I did live, major organs in my body would most likely be severely damaged.

When I did awaken five days later, knowing that the suicide attempt had failed, I realized that death was not an option. And it was also apparent to me that the doctors, in spite of their earnest efforts, would not be able to help me. The one thing I had not done through all the misery I had been experiencing was to turn to God for help. So at that very dark point in my life, I decided to turn wholeheartedly to God. As I lay in the hospital bed over the next three days, unable to sleep at all, much of what I had learned in the Christian Science Sunday school 30 years earlier flooded into my thought.

To the astonishment of the physicians, I recovered from the effects of the overdose in those few days. Although the physical symptoms I had endured for so long prior to the overdose had not abated, I was released from the hospital. Shortly after my return home, I called a Christian Science practitioner for Christian Science treatment and told her of my suffering and hopelessness. She expressed so much love, and confidently assured me that God was right there with me, and that I had never been, and could never be, separated from His love and care. So began my study of Christian Science.

When I first began a regular study of the Bible and Science and Health by Mary Baker Eddy, much of it seemed very foreign to me. I wondered how the ideas I was reading could heal me when I couldn't grasp even one thought. But, I persisted because I knew that this was my only hope of ever regaining my health. Over a period of many months, I began to grasp some of the healing ideas I was reading. I also subscribed to the Christian Science Sentinel and Journal, and regularly read the inspiring articles and testimonies in them. Gradually, I began to feel some hope that I could be healed.

There were more days than not, however, when I felt very fearful and discouraged. But the dear practitioner continued to remind me daily of God's great love for me, and of His healing power and presence in my life. She spoke to me so reassuringly, many times telling me of stories in the Bible about those who had turned wholeheartedly to God for help and had found healing and redemption.

The practitioner prayed with me daily for about five months when I experienced a profound healing. One day, as I read uplifting words in a Journal article, the power of divine Love, flooded my consciousness—a power so great, that I threw my head back and groaned. I knew I was healed! The love that I felt went right to the diseased condition and eliminated it from my thought and from my body. In the almost 21 years since that healing occurred, I have had no return of the symptoms. A wonderful transformation of my character has also taken place, and, in turn, my marriage is now harmonious and happy. I now strive to live each moment of every day of my life in total dedication to God. Turning to Him and listening to His voice for guidance and direction in all aspects of my life, I find that every need is met.

I'm deeply grateful that I am now able to heal others through the understanding of God that I've gained through my daily study of this precious Science. I know that no matter how dark anyone's situation may be, divine Love is more powerful than that darkness, and that the understanding of God can heal anything. With the peace and the joy that Christian Science has brought to my life, I can truly say that I have been "born again." 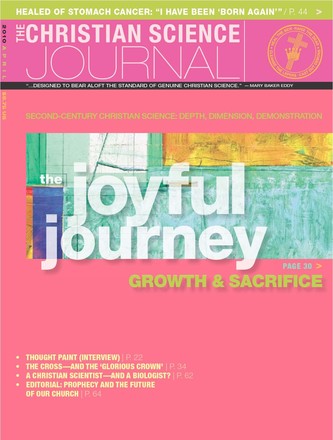 Bridge-Building from Boston to Baguio City

A Continent of Hope

The Final Word: Life with a Capital L

The Cross—and the 'glorious crown'...

Names and numbers? Or something more?

PRAYER HEALS INFECTION AND EFFECTS FROM A FALL