I would like to add my bit of gratitude in the following testimony. During the last fifteen years Christian Science has proved a very present help in time of trouble, and has never failed to relieve every discordant condition which has been presented to me. My attention was first called to Christian Science when my mother was healed of a so-called incurable nervous trouble. I was grateful for her healing and read "Science and Health with Key to the Scriptures" by Mrs. Eddy, but did not apply it personally until two years later, when I had serious need of it.

I had just arrived in Los Angeles and had a return of a condition which had been pronounced by physicians to be appendicitis. The time had come for me to choose either the hospital or Christian Science. Having lost faith in surgery and materia medica, I turned to Science and Health. Being a stranger I knew no practitioners, and I could not leave my room to look for one. I got relief from my reading, and so continued; and in five days found myself healed. There has never been any return of that trouble. Soon after this I was healed of rheumatism, smoking, and the social drink habit.

A year ago I had the privilege of being a guest at the Sanatorium of The Christian Science Benevolent Association at Chestnut Hill, Massachusetts, for six months. The loving courtesy, the atmosphere of consecration and expectancy of healing, which pervades that place, helped me a long way on the road from material sense to the understanding of Soul. We can never be too grateful or do too much toward helping along this wonderful work which Mrs. Eddy's wisdom provided for us. 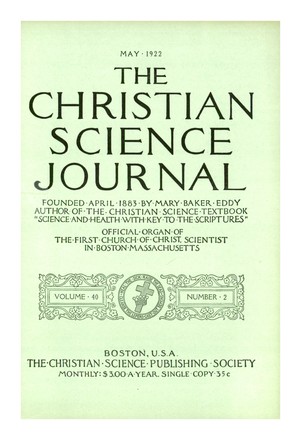 OVERCOMING A FALSE SENSE OF RELATIONSHIP

WHEN THE WILDERNESS BLOSSOMS

"BY THE WORD OF THEIR TESTIMONY"

THE PRAYER OF PROTEST

THE ONE PRIMAL CAUSE

ADMISSION TO MEMBERSHIP IN THE MOTHER CHURCH

With deepest gratitude to God,...

I would like to add my bit of gratitude...

I am indeed grateful for this privilege...

By Addie Ross with contributions from Etta L. Ross | May 1922

It is with deep gratitude that I...

I wish to express my gratitude for...