In high school, I got involved with people who often made questionable choices in the name of nonconformity. Their ideals appealed to me. Like them, I wasn’t content with the status quo and felt there had to be a better way to live, somewhere. I’d heard of a commune located far up in the mountains, and I thought it would be interesting to see a community of people who claimed they shared a better approach to life by separating themselves from society and by creating their own values.

When my mom and I arrived at the commune, we were warmly welcomed by people who seemed happy and embracing. But when I was given a tour of the living areas, members of the commune started asking me strange questions. For example: Would I transition my car’s ownership to the group? These inquiries niggled at me, giving me the sense that something wasn’t quite right. Still, I thought I could at least give the community a try; the lifestyle seemed attractive and happy, separate from the busy world. I thought living with this group would give me time to search for the truths about life.

Everything from an innocuous Facebook “like,” to the pull to join an extremist organization, requires us to think for ourselves.

First, though, I had to take my mom home. But as I moved toward my car to leave the group, the whole atmosphere changed. I felt smothered—like a heavy woolen blanket had been thrown over my shoulders. Groups of men and women surrounded me, trying to convince me not to leave. They warned me of bad “outside world influences” that might prevent me from returning. Some of them even pushed around me rather aggressively, telling me I should stay.

I could tell that my mom’s concern was escalating, and I knew I had to get her out of there. So I got in the car and drove carefully through the crowd and down the dirt road. As we made our way back down the mountain, it occurred to me that living in an isolated way, even with like-minded people, was not a requirement on the path to finding truth.

Not too long after this experience, I attended a service at a Church of Christ, Scientist, with a close friend. I loved the Bible-based sermon that was free of personal opinion, and the beautiful messages in the hymns. It felt really good to be there; I was warmly welcomed, but I felt no pressure or sense of exclusiveness. I could tell I’d found what I was looking for: a way to discern and understand spiritual reality.

Perhaps the most striking contrast between Christian Science and my encounter with the commune is that Christian Science encourages thinking for yourself. The Preface of the textbook of Christian Science, Science and Health with Key to the Scriptures by Mary Baker Eddy, states, “The time for thinkers has come” (p. vii). This is vitally important in a world where everything from an innocuous Facebook “like,” to the pull to join an extremist organization, requires us to think for ourselves to be sure that we aren’t just following the crowd.

The subtle impulse to be carried along on currents of thought tugs at people from all directions. It’s apparent in the quest to be thin, or to have a “perfect” body or face. It’s expressed in humiliating hazing practices at universities, and in peer pressure to conform to rebellion, cynicism, and even “party behavior.” It’s apparent in something as “minor” as social media bullying, and in something as extreme as joining a violent gang and engaging in criminal activities.

Our defense against these mental pushings and proddings is the simple but powerful fact that God is the only Mind, and that, as the spiritual expression of this Mind, we have the inherent ability to think rightly. One simple discipline I’ve found helpful is examining the thoughts that come to me and evaluating whether they lead me closer to God, who is divine Love and Truth, or whether they would draw me away from His goodness. I’m quick to dispense with thoughts that would have me believe I’m anything less than God-created and whole—or that anyone else is. Same goes for any thoughts that would tempt me to believe that satisfaction, joy, completeness, and so on, aren’t already within me as part of the “kingdom of God” that Christ Jesus talked about (see Luke 17:21). Feeling the conviction of our own spiritual wholeness as God’s children, as well as everyone else’s, eliminates the supposed pull of conformity, groupthink, or mass mesmerism, because in knowing ourselves as God knows us, we find the freedom and strength to know and do what’s right, even if it’s unpopular.

In knowing ourselves as God knows us, we find the freedom and strength to know and do what’s right, even if it’s unpopular.

I also find it helpful to pray consistently to understand and feel my oneness with God. When I’m keeping Love at the center of my thoughts and actions, I’m not attracted to the empty promises of simply going along with the crowd. And knowing that we actually live in Love, that we’re each embraced by Love, demagnetizes the pull of suggestions like, “But I want to fit in,” or, “If I don’t join in, I’ll be isolated/unpopular/disliked.” Our unbreakable connection to Love trumps these impulses and renders them powerless.

This doesn’t mean, however, that thinking differently has to isolate us. In fact, we can join together as church members and fellow Christian Scientists to challenge every commonly held assumption about where our individuality comes from, what brings satisfaction, or what it takes to fit in. As we do so, we’ll find safe and lasting connectedness that doesn’t involve getting swept up in popular beliefs.

I went looking for “different” in that mountain commune, but it wasn’t until I found Christian Science that I realized that what I was really looking for was something more: to understand that God is Spirit, and that existence is spiritual. And ultimately, that’s what thinking differently is about: thinking spiritually. As we do, we’re freed from the mental currents of mindless conformity that would bring us down or undermine our ability to think and act correctly—to think and act like spiritual healers. And we find a deep and meaningful sense of belonging—with all of God’s children. 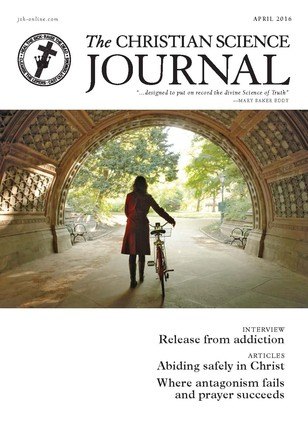 The blessings of work in the church ‘lab’

What is rules out ‘what if?’

Where antagonism fails and prayer succeeds

Healing: a revelation of the real

Healing of disease diagnosed as incurable

God, the only creator

Our source of strength and supply

Not needed at that meeting?