Mary Baker Eddy loved the Bible. The King James Version of the Bible was the first book from which she was taught. She learned to read from it and studied it daily from a child and throughout her life. The Bible was her chart and guide for living. In 1846, the year she identified as marking the beginning of her search “to trace all physical effects to a mental cause” (Retrospection and Introspection, p. 24), she wrote a poem titled, “The Bible.” Her first words to describe it are “Word of God!” And a little further on she speaks of her Bible as:

From 1856–1862, when Mary was in large part confined to her bed because of invalidism, she spent most of her days studying the Bible. In Science and Health with Key to the Scriptures, the textbook of Christian Science she later authored, she wrote, “As early as 1862 she began to write down and give to friends the results of her Scriptural study, for the Bible was her sole teacher; …” (p. viii). She would daily turn to her Bible for guidance throughout her life. No book was ever more important to her. In her later years, when she had a household staff in Concord, New Hampshire, and then in Chestnut Hill, Massachusetts, her custom was to open her Bible at random in the morning and call her staff together to share with them the inspiration that came to her from reading the verse or verses her eyes fell on.

Mrs. Eddy wrote in Science and Health, “For three years after my discovery [of Christian Science in 1866], I sought the solution of this problem of Mind-healing, searched the Scriptures and read little else, kept aloof from society, and devoted time and energies to discovering a positive rule” (p. 109). She also wrote, still speaking of herself, “Before writing this work, Science and Health, she made copious notes of Scriptural exposition, which have never been published” (p. ix). Those notes took up over 600 pages. It’s clear that the Bible was the inspirational foundation from which she wrote the Christian Science textbook.

She would daily turn to her Bible for guidance throughout her life. No book was ever more important to her.

When one of her students, William P. McKenzie, sent her a new translation of the New Testament in February 1900, she responded: “It was very kind [of] you to send me the Twentieth Century New Testament. But it may surprise you to know that I am not fond of new things unless they are more spiritual than the old. To my sense this version has lost somewhat of the grandeur of climax that distinguished the Authorized Version” (L13053, The Mary Baker Eddy Collection, The Mary Baker Eddy Library).

In her reply, she also wrote, “In some instances the text seems clearer e.g. where (deadly thing) is changed to the word poison” [see Mark 16:18]. “Yet this lucid word may be objectionable. I think the Authorized Version intended to convey the sense that injected poison by serpents were included. Moses was commanded to handle serpents harmlessly, and Paul met the fear of the viper, and David instanced ‘the young lion and the dragon.’ But there is one improvement indisputable so far as I have read. This version employs the term ‘evil spirits’ instead of devils.”

So we can see that Mrs. Eddy appreciated where a translation other than the King James Version “in some instances” made the text clearer. As she does in Science and Health where she writes, “Hear the wisdom of Job, as given in the excellent translation of the late Rev. George R. Noyes, D.D.:—

Shall mortal man be more just than God?
Shall man be more pure than his Maker?
Behold, He putteth no trust in His ministering spirits,
And His angels he chargeth with frailty.”
(p. 360)

The King James Version of that same passage reads: “Shall mortal man be more just than God? shall a man be more pure than his maker? Behold, he put no trust in his servants; and his angels he charged with folly” (Job 4:17, 18).

Students of Christian Science likewise appreciate the value of different Bible translations. They can also appreciate and be grateful when the Christian Science Bible Lesson Committee occasionally uses these translations for the Golden Text or Responsive Reading in the English Bible Lesson in order to make the meaning of the text clearer, which was also done in Mrs. Eddy’s day.

In 1901, Mrs. Eddy was preparing the final major revision of Science and Health with the assistance of William McKenzie and Edward Kimball as proofreaders. On November 20, she wrote to Mr. McKenzie, “I left the Bible quotations principally to Mr. Wiggins, but always enjoined him to quote from the [King] James’ translation. I like the old, better than the new, in some respects,—in a majority of instances, I will say” (L10602, The Mary Baker Eddy Collection).

And on the same day, Calvin Frye, her secretary, wrote Mr. Kimball: “She says: Make all Scriptural quotations verbatim as in [King] James translation of the Scriptures” (L12425, The Mary Baker Eddy Collection). Three days later she addressed a letter to both men reiterating this instruction, telling them that “Spirit not spirits has led me. … Take the scriptural quotations all from one translation of the Bible …” (L10617, The Mary Baker Eddy Collection).

The King James Version was the primary Bible translation of Mary Baker Eddy’s life. For many English-speaking students of Christian Science, the King James continues to be the primary, though not the only, Bible translation they turn to for their scriptural study and use. Of course, the primary translation for those who read and study the Bible and Mrs. Eddy’s writings in other languages is not the King James Version. For example, the primary translation that German speakers read from is the German NeueLuther Bibel; the French la version Louis Segond de 1910; the Spanish La Santa Biblia, Reina-Valera, 1960; and the Portuguese da Bíblia tradução de João Ferreira de Almeida, Revista e Atualizada, 2a Edição. These are the translations quoted in the four print versions of The Herald of Christian Science and used for those languages’ Bible Lessons.

Perhaps the most telling insight about how important the spiritual sense of the Scriptures is, can be found in how Mrs. Eddy ended her February 1900 letter to William McKenzie: “When we translate matter into Spirit we shall then have not only the Authorized Version, but the eternal version of the Scriptures. I never read the Bible now without such an illumination that every word of it contains a spiritual meaning” (L13053, The Mary Baker Eddy Collection).

Robert Warneck is a Christian Science practitioner and teacher from Burlington, Vermont. 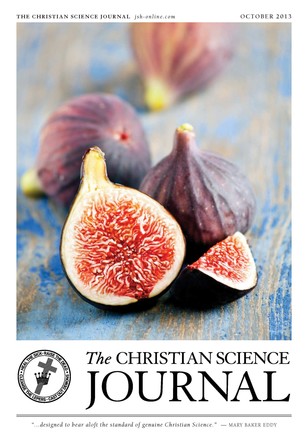 Getting the real news

I walk with Love

The blessings of waiting on God

The courage of conviction

Mary Baker Eddy and the King James Version of the Bible

From the Clerk of The Mother Church | October 2013