Many years ago, while working as a Christian Science practitioner on a case that wasn’t moving quickly toward healing, I felt sure that the clarification of one point in the metaphysical laws that underlie healing held the key to progress: “How does what I am knowing, affirming, praying, here, reach and impact the person asking for help through prayer over there?”

I called and asked a colleague, a fellow practitioner, and she replied by asking me two questions: “How many minds are there? How many consciousnesses?”

I said, “Stop. Say no more.” Off like a shot, I knew how to pray more effectively. I needed to start from the right premise.

There is only one Mind, God, not multiple minds—as in a separate healer-consciousness and patient-consciousness. The one and only consciousness is God, the one infinite and perfect Mind.

For Christian Science treatment to be effective, the healer’s prayer must witness to what is already true of Mind and man.

Understanding the relation of Mind and man, Mary Baker Eddy wrote this about man in the Christian Science textbook: “He is the compound idea of God, including all right ideas; the generic term for all that reflects God’s image and likeness; the conscious identity of being as found in Science, in which man is the reflection of God, or Mind, and therefore is eternal; that which has no separate mind from God; that which has not a single quality underived from Deity; that which possesses no life, intelligence, nor creative power of his own, but reflects spiritually all that belongs to his Maker” (Science and Health with Key to the Scriptures, p. 475).

So man, reflecting the one and only consciousness or Mind that is God, can actually only possess or be conscious of what is true. For Christian Science treatment to be effective, the healer’s prayer must witness to what is already true of Mind and man, blotting out any claims or accusations against the spiritual identity of the patient—leaving the one Mind, manifesting itself through the Christ, to enlighten the thought of the patient and bring healing.

Healing prayer discerns law, the divine law of the indestructible unity of God and man, which is manifest on earth (human experience) as it is in heaven (the divine consciousness of Mind), as it’s understood. Christ Jesus declared this human and divine coincidence in what we call the Lord’s Prayer, when he said, “Thy will be done in earth, as it is in heaven” (Matthew 6:10).

And so, in this case, when I became conscious of one (and only one) Mind, the struggle to pray my way out of a corner to reach and help my patient suddenly stopped. I became conscious of both my and the patient’s total unity with the Mind that is divine Spirit, and the case was quickly healed.

This lesson has been foundational to my healing work ever since. When I have struggled on a case to witness to God’s healing power, most often I have been entertaining the latent belief that the patient has a separate mind that must change or yield to the Divine for healing. My own awakening from this belief by answering the question “How many minds are there?” with the scientific recognition of one Mind, one divine consciousness, has opened the way to full healing. Mortals may seem to have separate minds; but mortality is a mistaken view of what is real, true, and permanent in man. Man is not a limited thinker or a fearful being needing to be convinced or changed or improved. Mortality, with its material beliefs of mind in matter, and of matter as substance that creates and destroys life, is an entirely false view of God’s man.

When prayer reveals and proves the spiritual facts of one Mind, and of man as the unchanged and unchanging infinite manifestation of Mind, the dream of a separate, suffering mortal consciousness breaks, and healing follows.

Science and Health explains, “Man and his Maker are correlated in divine Science, and real consciousness is cognizant only of the things of God” (p. 276). 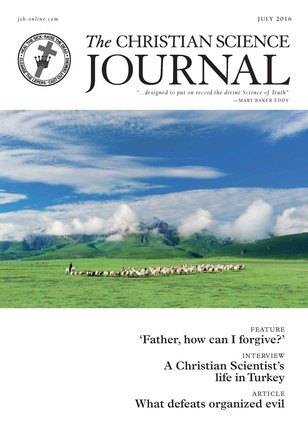