About a month ago I had a friend over.

As we were going for a walk down my street, we began talking about parties and how nowadays, for it to be a good party you have to have alcohol. I told her that I really wanted to have a party at my house, but the one thing I was worried about was that I'd have to have alcohol for anyone to come. That's when Christian Science came up.

I said, "No, actually, I haven't." I told her that it wasn't something I get into because of my religion, Christian Science.

I'm always making jokes, and at first she thought I was trying to make something up, but I told her, "No, really, I'm a Christian Scientist."

At school people don't talk about religion much, but just about everyone talks about how much they drink.

Then I started to tell her a lot about Mary Baker Eddy, who founded Christian Science, and what an exceptional woman she was. My friend is really into women's rights, so she was interested. Her positive reaction took me off guard. She's popular at school, and I didn't think our religion conversation would last very long. But she began asking me a lot of questions. We didn't really talk about the reason that I don't drink, but we got into discussing spiritual healing. and I told her about a healing I had a few years ago in Montana when our family spent the summer with my grandparents. They have a hay pasture on their property, and the first night we were there I had an allergic reaction to the hay. It began with a sneeze here and there, and then my eyes began to swell and become painful.

The second day of our visit, my family and I began working on an old family farmhouse where we planned to stay for the summer, and the only furniture we had in the house was a rocking chair. Since I didn't feel well, my mom was worried because there was no place for me to be comfortable. I called a Christian Science practitioner to ask him to pray with me. He asked me what was going on in my thought, and I told him that I was dealing with a lot of fear and pain. I remember him calmly telling me that God was governing me and not the belief that I could be affected by pollen or anything other than good.

I hung up the phone, and as I thought about what the practitioner had said, I fell asleep peacefully in the chair. When I woke up a short time later, I could see out of both eyes, and there was no more pain or swelling. A few days later, the sneezing was totally over, and I went on helping my grandparents, changing sprinkler pipes and bucking bales of hay. The rest of the summer I didn't have any more problems with allergies. We've been back to Montana for the past two summers, and I haven't had any more allergic symptoms since.

My friend seemed pretty impressed by that healing, and after we finished talking, she told me that if she had a religion, she thought she would like Christian Science. It's not like I was trying to convert her or anything, but I thought that was really cool because I could tell she was looking for something.

As far as drinking goes, at school people don't talk about religion much, but just about everyone talks about how much they drink. Every Friday a lot of guys and girls ask me if I'd like to do some kind of smoking or drinking over the weekend. I know some kids who drink, and I see what they're like after they drink, and it's not pleasant. When they get a buzz or get drunk, it's like I'm not talking to them, I'm talking to this fake person, and I can't have a real conversation with them. A lot of people say that they get a buzz because it brings out their personality. This idea that you can have fun only if something else controls you has kind of been a turnoff for me. I believe it's all about what or who you're giving power to. Jesus said for us to have only one God, the one power. Alcohol, heroin, weed—any of that stuff—can easily become a god. It's sad, but a lot of kids at school have already made drugs their god.

Actually, I see a lot of kids being influenced to smoke or drink by music. I really like rap and hip hop, but a lot of the lyrics talk about how cool drugs are. When guys talk about smoking and drinking, they sometimes don't even realize they're quoting a song and not using their own words. I'll call them on it and say, "Dude, that's really lame, you just totally quoted that from a rap song."

People assume I smoke and drink, too, because of the friends I hang out with at school. They're not the stoners or anything, but people just expect that if they drink, then everyone else must drink. I make sure I'm not quiet about it when someone assumes I take drugs. When I'm one-on-one with someone who assumes that I do drugs, I tell them that I don't. But I don't embarrass them in public or sound like I'm superior to them.

When I was hanging out in Montana once with some guys, they asked me if I wanted to drink. I said, "Nah, I'm not into that," and the older guy in the group who seemed more mature was taken aback by that response. He seemed to be more friendly toward me, like I had gained his respect. That was an instance when I stood up for myself, and I gained a friend. The other guys weren't mad at me, but they simply went on to a different subject.

A lot of people are insecure about who they are, so they try to be like everyone else or do whatever it takes to be accepted by a group. I think that knowing who we are—that we're each the reflection of God, but at the same time different and unique—is pretty cool. No one can be as good as you are at being yourself. You're the best at who you are. That's something my mom would tell me when I was younger—and I still think about it. 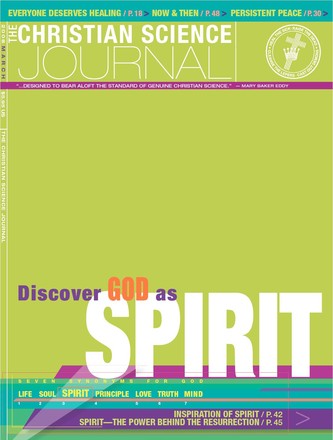