March is Women’s History Month in the United States, and this year it honors the suffragists, whose valiant efforts gained women the right to vote. Over a span of eighty years these women tirelessly wrote, gave speeches, marched, and even went to prison in support of their cause, which culminated in the 19th Amendment to the US Constitution granting all citizens the same voting rights regardless of gender. This year marks the centennial of the amendment, ratified in 1920.

Anthony expressed an interest in Christian Science and wrote to Mary Baker Eddy in January 1887 about the first three volumes of History of Woman Suffrage.

Anticipating this progressive step, Mary Baker Eddy wrote: “Our laws are not impartial, to say the least, in their discrimination as to the person, property, and parental claims of the two sexes. If the elective franchise for women will remedy the evil without encouraging difficulties of greater magnitude, let us hope it will be granted” (Science and Health with Key to the Scriptures, p. 63).

The March issue of the Journal features three women—two in America and one in Australia—who were prominent in the early women’s movement. All of them had connections to the Christian Science movement, and two were members of The Mother Church. Their stories are part of The Mary Baker Eddy Library’s article series Women of History. This collection of nearly forty profiles can be found on the Library’s website, marybakereddylibrary.org.

Vida Goldstein’s profile has been adapted here from a longer version that you can read online. You can also listen to Episode 36 of the Library’s podcast series Seekers and Scholars. In this episode Clare Wright, author of You Daughters of Freedom: The Australians Who Won the Vote and Inspired the World, talks further about Goldstein and the Australian suffrage movement.

The sovereign freedom of each individual. A woman’s right to own property. Temperance.

Like Mary Baker Eddy, Susan B. Anthony (1820–1906) honored these causes, although the two contemporaries went about addressing them in different ways. For Eddy they were expressions of a universal truth, and they gained momentum through the study and practice of Christian Science. Anthony, on the other hand, focused more on activism and grass roots engagement. 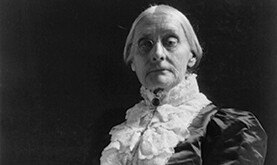 Susan B. Anthony c. 1900-1906, in a photograph by Frances Benjamin Johnson (Library of Congress Prints and Photographs Division, Washington, D.C.).

Anthony was born into a large Quaker family and embraced social causes early in life. Her family’s farm near Rochester, New York, became a center for the abolitionist movement. As she developed in her commitment to the rights of women and black people, she joined with others who supported these causes, most notably Elizabeth Cady Stanton (1815–1902). Together they championed the goal of universal women’s suffrage and gained successes at the state level, although neither saw the vote extended to all American women in her own lifetime.

Anthony expressed an interest in Christian Science in the late 1880s and wrote to Eddy in January 1887 about the first three volumes of History of Woman Suffrage, which Anthony had worked on along with Stanton and Matilda Joslyn Gage. The next month she took Primary class instruction in Christian Science healing with Eddy’s student Laura Lathrop. The following year she was in the audience when Eddy spoke at the Chicago Music Hall in 1888—an event to which she would refer in a 1903 letter to Eddy when sending an inscribed copy of the fourth volume of History of Woman Suffrage.

While there is no record of Susan B. Anthony becoming a practicing Christian Scientist, she respected Mary Baker Eddy and her teachings. “What of Mrs. Eddy?” she asked in 1899. “No man ever obtained so large a following in so short a time. Her churches are among the largest and most elegant in Boston, Chicago, and other cities” (Christian Science Sentinel, December 14, 1899). We also know that Anthony cared enough to give a copy of Science and Health to her close companion Emily Gross. She inscribed it “with dearest love.”

Cora Rigby (1865–1930) made unique contributions to the field of journalism. Her career spanned a period in history when women were beginning to find a place in this profession.

Born in Lancaster, Ohio, Rigby began writing for a political column in a Columbus newspaper when still a girl. Her first job was a staff position with The Boston Globe, and that was followed by work as a reporter for other publications in New York and London.

She joined The Christian Science Monitor’s Washington, DC, bureau in 1919. That year she was one of ten women who, along with one hundred men, gained access to the United States House and Senate press galleries. Three years later she became the bureau’s manager, working in that role for the rest of her career. She joined The Mother Church in 1925. At the time of her death, she was the only woman to have headed a news bureau in the nation’s capital. 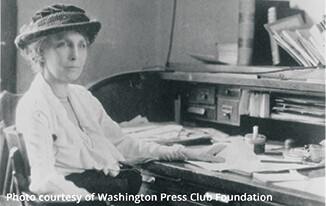 Perhaps one of Rigby’s most notable achievements was her role in founding the Women’s National Press Club (WNPC), in response to what she referred to as “the conspiracy of men to keep women off the newspapers—or at least to reduce their number, wages, and importance to a minimum” (Winifred Mallon, “The Whole Truth, as Far as It Goes, about Ourselves”). The all-male National Press Club heartily enforced the prevalent biases of the time, barring women from membership as well as attendance at its functions.

In the autumn of 1919, soon after Congress passed the 19th Amendment to the Constitution granting universal suffrage, Rigby and five other women in the Washington press met in her Monitor office to form their own organization designed to further the progress of women in the field of journalism. The WNPC grew in influence and proved itself, operating for decades—even after the National Press Club at last voted to admit women in 1971. Rigby served as its president for three successive terms.

Rigby’s correspondence indicates she was frank and to the point, by all accounts an exceptional journalist who also had the confidence and managerial skill needed to supervise and at times mentor an office of aggressive political reporters.

“Her male colleagues in Washington bore her in highest esteem,” wrote Monitor editor Erwin Canham. “I know, for I was first introduced by her to the leaders in the press corps there on my first venture in capital [Washington] journalism. I saw the respect and affection with which she was accepted everywhere” (Commitment to Freedom: The Story of The Christian Science Monitor, p. 280).

Rigby worked for the Monitor up until her death in 1930. She led her profession forward through a combination of her skill as a reporter and her courageous commitment to securing a place for women in American journalism.

Vida Jane Goldstein (1869–1949) was a leading Australian suffragist and peace activist. She was also a Christian Scientist. In 1906 the Perth Daily News reported that she was “probably the most famous woman in the Commonwealth” and “earned this distinction by her championship of women’s rights throughout Australia.”

Goldstein was the oldest of five children born to parents who were devout Christians with a strong social conscience. Her adult life began in the 1890s, a time of immense social change and religious ferment. Christian Science was slowly gaining adherents in Australia, having been founded a couple of decades earlier in America by Mary Baker Eddy. While there are no clear indications of when Goldstein first heard of the religion, she joined The Mother Church in 1902.

Goldstein became one of the first women in the British Empire to run for a parliamentary seat.

As Goldstein was developing her faith, she was also paying attention to social and political issues. Her first role within the suffrage movement involved door-to-door canvassing for signatures. Throughout the 1890s she became increasingly prominent, making her first public speech at a women’s suffrage meeting in 1899.

In September 1900 Goldstein founded a monthly journal, The Women’s Sphere, which contained reporting on the Australia and worldwide suffrage movements. And in 1902 she attended an international women’s suffrage conference in Washington, DC, where her address was well received. She also met President Theodore Roosevelt on that trip. This was the first of many international trips Goldstein would embark on in support of suffrage. 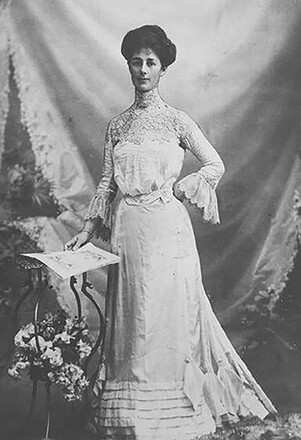 The following year she became one of the first women in the British Empire to run for a parliamentary seat. While she never won an election, she ran five more times as an independent, emphasizing “the necessity of women putting women into Parliament to secure the reforms they required” (“Miss Goldstein at Brunswick,” The Argus [Melbourne, Victoria], March 17, 1910).

By 1911 all Australian states had passed women’s suffrage legislation, quite a few years before American women were given the vote through the 19th Amendment to the US Constitution.

World War I strengthened Goldstein’s pacifist views. Along with her work in the suffrage movement and Australian politics, she helped found the Women’s Peace Army in 1915. But after the war, Goldstein began to shift her priorities. She gradually scaled back her political involvement until, by the mid-1920s, she had put public appearances and campaigning aside in order to practice Christian Science healing full time.

According to Clare Wright, “Vida Goldstein was one woman who was utterly alive to the great challenge of the time” (You Daughters of Freedom: The Australians Who Won the Vote and Inspired the World, p. 39). That challenge lay in convincing the world to take the rights of women seriously. Goldstein not only rose to the task but lent her understanding of God to its
achievement. 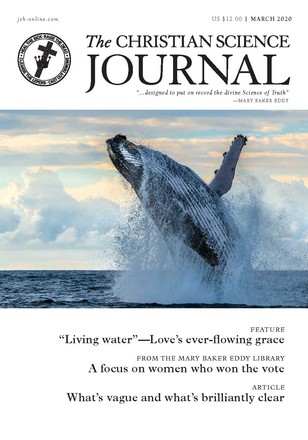