A ray of light, not a doormat, is a good symbol for humility. A ray of light can exist only in conjunction with its source. It never operates alone. It is always the expression or emanation of its source. In the same way, true humility is expressed by man, who is dependent on God, Mind. The spiritual and perfect man of God's creating is indeed the emanation and expression of his creator. He manifests and reflects the divine qualities. He has no intelligence, life, or existence apart from his Father.

The individual who understands such humility finds that it is not enfeebling but ennobling. It gives one who practices it inspiration and increased capabilities. Maintaining a conscious dependence on Mind, he is reassured by the support and strength he feels. Turning to Mind for inspiration, he finds ideas flowing into his consciousness from an inexhaustible source, enabling him to manifest originality, inventiveness, creativeness.

Christ Jesus preeminently demonstrated the lovely quality of humility. The New Testament records in several passages his recognition that he was not the power which was responsible for the remarkable works he performed. His constant communing with God, listening to his Father, enabled him to do his work. Even from boyhood he was about his Father's business, and throughout his life his aim was to do his Father's will.

After he had healed a man who had been ill for thirty-eight years, his opponents, probably envious of his healing power, criticized him, ostensibly because he had done the work on the Sabbath day. Jesus' reply, "My Father worketh hitherto, and I work," only enraged his enemies, "because he not only had broken the sabbath, but said also that God was his Father, making himself equal with God." Then Jesus explained, "Verily, verily, I say unto you, The Son can do nothing of himself, but what he seeth the Father do: for what things soever he doeth, these also doeth the Son likewise."John 5:17–19;

It is significant that his humility brought forth the fresh accusation that he had made himself equal with God. This accusation was typical of the carnal mind, which is a liar and claims to do its work by telling lies. Envy, which is one of its qualities, obscures vision so that, to the envious, the lie seems to be truth.

On another occasion, a man came to Jesus and addressed him as "Good Master." He replied with these words: "Why callest thou me good? there is none good but one, that is, God."Matt. 19:16, 17;

At the Last Supper, as his great career was drawing to its close, Jesus taught his disciples several significant lessons, among them the need for humility. When the meal was over he rose and washed the feet of each one of them. He explained the lesson as follows: "Ye call me Master and Lord: and ye say well; for so I am. If I then, your Lord and Master, have washed your feet; ye also ought to wash one another's feet. For I have given you an example, that ye should do as I have done to you. Verily, verily, I say unto you, The servant is not greater than his lord; neither he that is sent greater than he that sent him. If ye know these things, happy are ye if ye do them."John 13: 13–17;

Jesus' humility and meekness enabled him to demonstrate the strength and might to turn the money changers out of the temple, to endure the crucifixion, and to come forth from the tomb alive. His humility helped to maintain his unity with Love and Life.

Mankind generally regard humility as something feeble, ineffective, passive. This is the false sense of humility, the doormat sense, which would describe man as a miserable sinner. Self-denigration is a form of malpractice which is destructive, stultifying, and limiting. It is not humility. It dishonors God because it attributes to Him an effete creation.

An aspect of this false sense of humility is sometimes found in such statements as, "Just leave it all to God and it will work out." At first sight this seems to indicate a very humble attitude, but it can also indicate a sense of eliminating man from the situation. At other times it may be a lazy approach. Man is essential to the situation. Without man God would be unexpressed, like a sun without rays of sunlight.

If there is some problem that needs to be solved, it requires work. Our work in Christian Science is not done merely by "leaving it to God" but by praying to realize our unity with divine Mind. Mind is already maintaining the perfect harmony of the universe. God's laws are operating every moment. If a problem confronts us, we need to work for receptivity to Truth, to let the Christ waken the human consciousness to see the harmony and perfection which Mind has made and is maintaining. The inspiration and intelligence and energy to do this work derive from God. Recognition of this enables us to do the work effectively and humbly.

Every individual human being is faced with the need for self-improvement. The more humbly this is recognized, the more rapid progress becomes. A clear distinction needs to be made between the perfect man of God's creating and the human being whose present performance falls far short of perfection. Humility is needed to detect our shortcomings. If the time and energy devoted to unnecessary criticism of our fellowmen were devoted to self-improvement and self-immolation, much more would be accomplished.

The gracious acceptance of a deserved compliment, when one appreciates that the work has been accomplished as the reflection of Mind, shows humility. However, mere flattery of the human personality can lull one into a stupor of self-satisfaction.

To excuse one's own mistakes or faults of character is to ensure that they continue. Sometimes faults of character result in physical disease, and a willingness to examine one's thinking frankly and part with whatever is unchristlike is necessary before the healing can take place. It is sometimes a temptation, in such a case, to believe that the physical problem is due, not to our wrong thinking but to the malpractice of others. No fault of character was ever healed by being swept under the carpet of self-deception.

Humility is greatly needed in the healing work of Christian Science. Who would wish to go alone to the bedside of a patient who seemed critically ill, believing that the healing depended on one's own unaided human effort? How heavy would seem such a burden of false responsibility! But to go, knowing that one does not go alone but that one goes as God's representative, consciously supported by divine Love, who is indeed the healing power, is to go humbly and confidently.

A humble awareness of how much more we have to learn of Christian Science is necessary for progress. Mere familiarity with the words of Science and Health by Mrs. Eddy does not mean that one necessarily understands very much of the textbook. To be content with a little understanding is to close the door on progress. To glimpse the infinite vistas stretching out in front of us and to resolve to learn and practice more of the truth ensures our advancement.

Our Leader never doubted the value of this great book; but she was modestly aware that she had written it, not by herself alone but with the aid of divine inspiration. She herself remained a close student of it, and in certain passages she implies her own need for more understanding. In "Miscellaneous Writings" she says, "Humility is lens and prism to the understanding of Mind-healing; it must be had to understand our textbook; it is indispensable to personal growth, and points out the chart of its divine Principle and rule of practice."Mis., p. 356;

To the Christian Scientist communion is not a religious rite but a daily communing with divine Mind, a humble listening to divine direction. Such communion leads on to demonstration of the divine power and to the happiness of being in God's service. Turning with childlike trust to his Father-Mother God, one shines with the radiance of Truth, the Light which is man's divine, inexhaustible source. This is true humility. Our Leader says: "Mind, joyous in strength, dwells in the realm of Mind. Mind's infinite ideas run and disport themselves. In humility they climb the heights of holiness."Science and Health, p. 514. 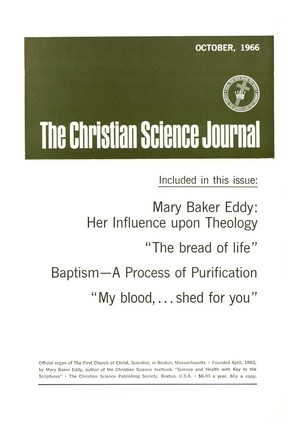 "The bread of life"

The Lamb of Love

How We Know that God Exists

Being Reconciled to God Brings Healing

Over forty years ago a severe attack of...

By Cuthbert Allan Taylor with contributions from Elizabeth Taylor | October 1966