The founder of this magazine, Mary Baker Eddy, once described “Christian” and “Science” as the “two largest words in the vocabulary of thought” (No and Yes, p. 10). She was uniquely aware of the link between science and Christianity. She knew that the Christianity taught by Jesus could be proved by healing—and thereby proved scientific—and she also knew that the grandest ideas of material science offered glimpses of the underlying spiritual reality. She affirmed, for instance, that “suns and planets teach grand lessons” (Science and Health with Key to the Scriptures, p. 240).

Often, however, the material world would suggest that science and Christianity are at odds. Yet occasionally, there are moments when a leap forward in physical science is so momentous—so bearing the fingerprints of limitless divine Mind, God—that its spiritual resonances are unavoidable. This is the story of one such example, and of how understanding those resonances can help strengthen the spiritual seeker to see beyond the picture the five senses present—and in so doing, to heal.

This is the story of light. Albert Einstein was fascinated by light. As a boy, he wondered what the universe would look like if he could saddle a beam of starlight and ride it across the expanse of space. As a man, he was convinced that light marked the limits of physics—moving with a speed that nothing else could surpass. Today, this premise remains foundational to science.

Yet, to the scientist who looks at the universe through a spiritual instead of a material lens, light is something even more meaningful. For example, to the inspired author of the first chapter of Genesis in the Bible, light is the universe’s primal spiritual substance—the spontaneous effulgence of radiant being (see Genesis 1:3). And to the disciple John, light points to the glory that forever is God and His Christ (see John 1:1–9).

A further exploration of this concept of light in the realms of both physics and metaphysics illumines some of the links between science and Christianity, and how material science reveals concepts that point more clearly to spiritual truths.

Light, after all, is essentially the purest form that matter can attain. It is the product of immense pressure deep within stars, which transforms matter into pure energy—into light. In fact, what Einstein revealed is that all the matter in the universe is actually just imprisoned energy, lacking the forces needed to transform it.

Christian Science unleashes our true identity as the perfect children of divine light.

Ronald W. Clark, Einstein’s preeminent biographer, put Einstein’s discovery like this in Einstein: The Life and Times: “All mass was merely congealed energy; all energy merely liberated matter.” Light was composed of “particles which had shed their mass and were traveling with the speed of light in the form of energy; while energy below the speed of light had been transformed by its slowing down, a transformation which had had the effect of congealing it into matter” (p. 133).

For the scientific world, this was a revelation. For the Christian Scientist, it may recall fundamental spiritual truths from the Bible: (1) that light, when spoken of metaphorically as a spiritual idea, is understood as wholly spiritual, as divine energy forever free of matter; and (2) that this spiritual understanding of light points to our true nature as the children of God.

Think about how the concept of light is used throughout the Bible. It represents the freedom of Spirit unconfined and the action of thought that has “shed” all material encumbrances. In the first chapter of Genesis, God said, “Let there be light,” and there was light. This light didn’t “slow down” or “congeal into matter.” Similarly, in the first chapter of John’s Gospel, the darkness comprehended not the light; they are described as wholly apart (see John 1:5).

Yet in the second chapter of Genesis, we do have an account of light “slowing down” and “congealing into matter.” We are told that “there went up a mist from the earth … and the Lord God formed man of the dust of the ground” (Genesis 2:6, 7). This is the Bible’s first mention of the concreting quality of matter and its origin in darkness, mist. So, it appeared that the divine light was slowed. That creation congealed. That the divine energy was spent.

But was it really? Is this record in the second chapter of Genesis true? What, truly, has happened? Again, material science offers useful clues, which ultimately must lead back to a purely spiritual view of identity.

When Einstein postulated E=mc2, the equation that shows matter to be energy, some scientists trembled. The equation indicated the awesome energies locked within matter. A brick, turned to pure energy, could destroy a city. This eventually led to the destruction in Hiroshima and Nagasaki. Material science had forcibly split apart matter’s fundamental building block—the atom—and unleashed horrific forces. It had illustrated the self-destructive quality of matter, or error.

I had realized that a material view of myself was a futile attempt to overthrow the divine order of the universe.

But looking deeper, we see that Einstein’s equation points to a great spiritual fact. As Eddy writes, “The greatest wrong is but a supposititious opposite of the highest right” (Science and Health, p. 368). How can we discern the highest right from such a great wrong as the destruction brought about by the atomic bomb? By knowing that this destruction necessarily reveals its spiritual opposite: the liberation from materiality and death that the understanding of Christian Science brings. Splitting apart the entire notion of a material self as apart from God, Christian Science unleashes our true identity as the perfect children of divine light, of God, and this understanding saves and heals.

Eddy writes in Science and Health, “Starting from a higher standpoint, one rises spontaneously, even as light emits light without effort; …” (p. 262). On the first page of this book, she explains how one “rises spontaneously” into light: with unselfed love, with an understanding that all things are possible to God, with self-immolation—in short, with the “splitting apart” (or destruction) of the entire sense of a personal, material self separated from God.

What is the material self, after all, but a concretion of thought—the imprisoning attempt to “slow down” the light from its divine source, God, and make it personal, human, corporeal? If we think the body makes up who we are, then we may need a mighty “detonation” of mortal self, through the self-immolation that reveals God, Spirit, as the source of our being rather than ourselves, to reach the higher understanding of our true, spiritual nature and identity.

I saw this firsthand about a year ago. I had been sick for more than a week. An acquaintance I knew asked me whether it was the “nasty” strain of flu that was going around. It got to the point where I even needed to miss teaching my Sunday School class, which is a highlight of my week.

During that hour on Sunday, when instead of teaching I was feeling wretched on my couch, the thought strongly came: “Get up.” I had no idea why this would make any difference. But the thought was adamant, so I obeyed and rose with some struggle.

I began pacing. Again, a thought came: “Declare the truth, out loud.” I answered verbally with a conviction that almost surprised myself: “I have no physical body. I have no house. I have no car. I have no material family.”

I sat down again and asked God: “Then what do I have? What am I, really?”

The answer came: “You are the star with the key; you are the leaves of the tree for the healing of the nations; you are the river that flows from the throne, clear as crystal.”

I had been studying the book of Revelation in the Bible, and I immediately knew what this unusual message meant. God was telling me to stop seeing myself as something separate from Him. He was telling me that my entire identity exists only as the expression of His action. The star with the key, the healing tree, and the clear river—these were all symbols used by the Revelator to show the harmony of God’s perpetual expression (see Revelation 9:1–6; 22:1, 2). When I saw this, the pain and exhaustion started to leave, and were gone by evening.

I had stopped seeing myself as an endpoint of God’s action—as though God sent out His goodness like a freight train and I was the terminal station. In other words, I had stopped trying to “slow down” God’s light, or to turn it into a material man. I had realized that a material view of myself was a futile attempt to overthrow the divine order of the universe, which expresses only its own goodness and harmony, and cherishes all identities.

Perhaps not surprisingly, Einstein found that his beam of starlight, which as a boy he had dreamed of saddling and riding across space, abides by similar principles. To ride it, he discovered, would be to see a universe very different from the one we think we know. At light speed, time stops; all distances become zero—or infinity, or both. The concepts of “here,” “there,” “now,” and “then” cease to have any meaning. From light’s perspective, the universe is only itself, because as Einstein’s biographer points out, “only light could reach the speed of light” (The Life and Times, p. 117).

Eddy echoed this idea spiritually: “Undisturbed amid the jarring testimony of the material senses, Science, still enthroned, is unfolding to mortals the immutable, harmonious, divine Principle,—is unfolding Life and the universe, ever present and eternal” (Science and Health, p. 306).

In the end, what does the “jarring testimony of the material senses” tell us about our true selves? Precisely nothing. The Apostle Paul saw that we are, at this very moment, the “children of light,” and he exhorted us to “walk as children of light” (Ephesians 5:8). As we do—as we radically claim only our heritage as the perfect emanation of divine light—the encumbering darkness of this world will fade until we see only the radiance of real being. 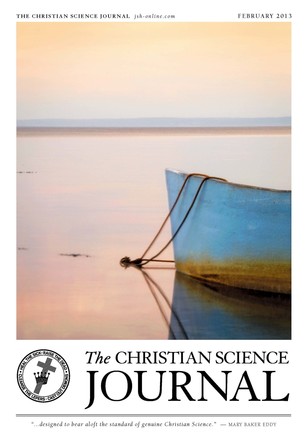 The children of light

Adventures on the upward way

By Lance Carden with contributions from Mary Baker Eddy | February 2013

You have a duty to live!

From the Clerk of The Mother Church | February 2013

Chet Manchester, President of The Mother Church, hosted this live chat with the Christian Science Board of Directors on October 25, 2012. | February 2013

No trace of injury

From the Christian Science Board of Education | February 2013