THE two disciples whom John the Baptist sent to the Master faced him with the eager inquiry, "Art thou he that should come, or do we look for another?" The implication plainly is that the Messiah had long been expected; and because of the marvelous works Jesus was performing, his fame had reached John, who, desirous of learning the Master's true status, sent to inquire.

The hope of Israel for a Messiah who should come in the fullness of anticipated glory had long persisted. In the book of Genesis the Messianic hope is expressed thus: "The sceptre shall not depart from Judah, nor a lawgiver from between his feet, until Shiloh come." As recorded in the book of Numbers, the prophet foresaw the coming thus: "A Sceptre shall rise out of Israel, and shall smite the corners of Moab." In Deuteronomy the prophecy took this form: "The Lord thy God will raise up unto thee a Prophet from the midst of thee...; unto him ye shall hearken." In definite terms Isaiah and Malachi foretold the coming of the Messiah, who should establish a kingdom of glory. Yet none, it seems, foresaw the form and manner of the coming. Many who observed the works of Jesus were convinced that at last the ancient Messianic hope had been fulfilled, even though the manner of that fulfillment was very unlike the traditional concept. When Jesus fed the multitude from a few loaves and a few fishes, this assurance found expression in these words: "This is of a truth that prophet that should come into the world." The ancient concept of the Messiah more commonly held was of a kingly man who should restore Israel's ancient glory and temporal power. Christian Science presents another view, however, which perfectly clarifies the situation.

In "No and Yes" (p. 46) Mrs. Eddy raises the question whether the future shall have a type of Christianity to heal the sick, or cling to material remedies and a superficial religion. "The advancing hope of the race, craving health and holiness, halts for a reply," she declares; "and the reappearing Christ, whose lifegiving understanding Christian Science imparts, must answer the constant inquiry: 'Art thou he that should come?'" The reappearing Christ, revealed and elucidated through Christian Science, is answering this question affirmatively; and in proof thereof, after the manner of Jesus' reply to the messengers of John, the demonstrators of spiritual truth to-day attest the Messiah's presence; for the sick are healed, the blind made to see, the deaf to hear, and the so-called dead are wakened to a new and higher sense of life, through the life-giving understanding of the Christ-presence.

Are we fully awake to the tremendous importance to the human race of this revelation? Are we aware of what it means to have had revealed to us the Messiah, the Christ-presence for which during so many generations the children of Israel hoped and prayed? How blessed are those to whom the light of the divine presence has appeared as Christ, Truth, the Saviour and Redeemer of mankind! What answer, then, are we as Christian Scientists returning to the query, "Art thou he that should come?" asked of the Nazarene and repeated by our beloved Leader? Are we meeting her expectation in demonstrating the life-giving understanding of Christian Science? We attest the truthfulness of our Leader's words by our reaction to them—by the changes they make in our lives. Are we being transformed from a material basis of living? Are we turning away from matter and material belief to find life and joy in Spirit? That is the question every true disciple frequently asks himself; and the response is found not in the words he speaks, but in the life he lives.

Mrs. Eddy makes perfectly clear the nature and mission of the Messiah. On page 333 of "Science and Health with Key to the Scriptures" she writes: "Christ expresses God's spiritual, eternal nature. The name is synonymous with Messiah, and alludes to the spirituality which is taught, illustrated, and demonstrated in the life of which Christ Jesus was the embodiment." "Messiah," then, may fairly be said to express the deific nature, the divine qualities. It is a synonym for the Christ, Truth. Therefore, not only has the Messiah come but it is ever present as Christ, Truth—is ever waiting at the door of human consciousness for the call to enter.

The Christ-idea, the Messiah, is eternally present, but the ancients, unaware of this, awaited the coming of a personal Messiah, a demonstrator, as it were, of spiritual truth. As such a Saviour, Christ Jesus proved the power of Spirit to destroy all unlike Spirit. In "Christian Healing" (p. 18) our beloved Leader assures us that Jesus established his claim to be the Messiah through his indubitable proof that Christ, Truth, heals sickness. Notable fact! Not upon any other of his marvelous works, but upon the healing of the sick, was his position established. Upon the same basis to-day must proof be adduced that Christ, Truth,—the Messiah,— is at hand, available to destroy the belief called sickness. Above all other demonstrations of spiritual power the healing of sickness stands as our positive proof that we have gained the life-giving understanding of Christian Science. 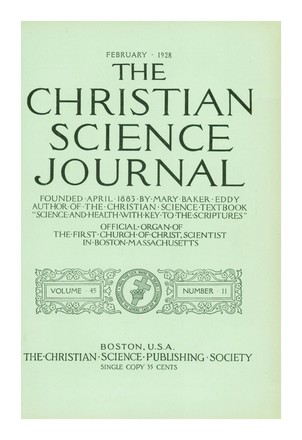 "THE FORMER THINGS ARE PASSED AWAY"

"HE THAT SHOULD COME"

"THE FATHER... HE DOETH THE WORKS"

"One generation shall praise thy...