When I am asked, “So, what do you do?” my response frequently brings a raised eyebrow. “I’m a Christian Science nurse,” I say. “A what?” the person often responds.

In my late teens, I decided to investigate this mystery further. I was aware that Mary Baker Eddy, who founded Christian Science, wrote in the Manual of The Mother Church a section establishing the Christian Science nurse (Article 8, Section 31, p. 49) And I made some other interesting discoveries.

One day a fresh model of this teamwork of Christian Science practitioner and nurse came to mind: Michael and Gabriel. Mrs. Eddy writes in Science and Health: “The Old Testament assigns to the angels, God’s divine messages, different offices. Michael’s characteristic is spiritual strength. He leads the hosts of heaven against the power of sin, Satan, and fights the holy wars. Gabriel has the more quiet task of imparting a sense of the ever-presence of ministering Love” (pp. 566–567). I reasoned that like Michael, the practitioner must be mighty in exercising spiritual strength. He or she actively recognizes man’s inseverable relationship to God and vigorously defends against any other supposed power. And like Gabriel, the Christian Science nurse tends to have the (sometimes) quieter job of expressing an unfaltering sense of God’s tender, ministering love in the daily details of living.

The paragraph continues, noting Michael’s and Gabriel’s active roles: “These angels deliver us from the depths. Truth and Love come nearer in the hour of woe, when strong faith or spiritual strength wrestles and prevails through the understanding of God.” In this team effort, Michael and Gabriel, angelic messages of Truth and Love, work together to deliver from the depths. This joint action could be thought of as two hands coming together, gently, securely holding man forever safe. I saw these two hands, this dual action of Truth and Love, exemplified in the practical love expressed by Christian Science practitioner and nurse.

This Truth/Love, Christian Science practitioner/nurse, action could also be seen as one hand holding a sword, in offense, and the other a shield, in defense. I envisioned Practitioner Michael, sword of spiritual authority in hand, on the offense against any attacks on his or her patient, and Nurse Gabriel, alertly shielding and sheltering, keeping that same patient safe from harm.

The conclusion of that Michael and Gabriel paragraph sums up the effect of Love understood by all involved: “The Gabriel of His presence has no contests. To infinite, ever-present Love, all is Love, and there is no error, no sin, sickness, nor death.” This is the bottom line of all the praying and caring done by all the helping parties: witnessing Love triumphant. And the effect of seeing Love triumphant is feeling it tangibly in healing.

I approached this task with great gentleness, aware that sometimes this can be quite uncomfortable. But as I removed the dressing, watching her eyes and face, it became clear to me that she was in no pain at all. When the dressings came off, new pink skin was already beginning to appear, a triumphant reversal of the doctor’s concern that new skin would not grow and that skin grafts would be necessary. The practitioner continued his staunch application of God’s law of perpetual health to the situation, and other Christian Science nurses and I continued to help this rapidly improving woman for about two weeks. At the end of this time, she was able to go to a retirement community, healed, without a scar, whole. (And she no longer had to light her own pilot light!)

Experiences like this are going on right now. Those unfazed, ever-compassionate, redemptive Michael and Gabriel qualities continue to deliver, just as that woman was freed. We humbly witness Love triumphant. 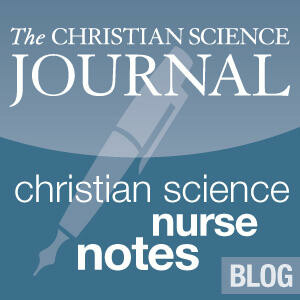 A career rich with blessings

A bicycle ride, a healing, and finding my calling

A ‘servant’ of divine Love

The Truth that frees

Safe in the ‘secret place’

Pour in the truth

Praying to have the Mind of Christ

Why I became a Christian Science nurse

A flame that never burns out