An innate desire for satisfaction is at the root of every enterprise, endeavor, and accomplishment. All too often the satisfaction craved is synonymous with self-gratification and personal aggrandizement and, emotional in character, stems from the carnal, or mortal, mind and sooner or later brings disappointment and suffering in its train.

On the other hand, we learn in Christian Science that true satisfaction is spiritual, substantive, and is found in selflessness. It is identified with lasting peace and happiness; it is indicative of divine exuberance and fullness—fullness of every Godlike quality—and it rests upon an abiding conviction of God's allness and His inclusiveness of man, made in the divine image and likeness.

Drawing a clear-cut distinction between genuine, God-derived satisfaction and its spurious, material opposite, Isaiah put it this way: "Wherefore do ye spend money for that which is not bread? and your labour for that which satisfieth not? hearken diligently unto me, and eat ye that which is good, and let your soul delight itself in fatness."Isa. 55:2;

Correlatively, Mrs. Eddy writes: "Soul has infinite resources with which to bless mankind, and happiness would be more readily attained and would be more secure in our keeping, if sought in Soul. Higher enjoyments alone can satisfy the cravings of immortal man. We cannot circumscribe happiness within the limits of personal sense. The senses confer no real enjoyment."Science and Health, pp. 60, 61;

Since enduring satisfaction is tantamount to spiritual fullness, it is plain that each one of us in his true selfhood possesses the acme of satisfaction by his very nature. As the compound idea of God, man is complete, embodying every spiritual quality emanating from the one infinite Mind, Spirit, the fount of all thought or substance.

From the relative, or human, standpoint, however, each one must make his choice between the satisfaction inherent in Godlikeness and that which is illusively corporeal. He needs to ask himself whether the satisfaction that is the motive underlying his thought and action is the intrinsic effect of Spirit, Soul, or God, hence firmly grounded and permanent, or whether it is the product of mortal belief, springing from illusion, hence unstable and transitory.

According to the Science of being, the individual expresses real satisfaction to the extent of his conscious coincidence with the divine. This coincidence is commonly acknowledged as the good in human nature. The phrase joie de vivre in its higher meaning alludes to wholesomely joyous living and may be construed as hinting an approach to a fuller expression of Life, God. Nevertheless, for a larger measure of God-derived satisfaction, a constant, conscientious cultivation of spiritual sense is requisite.

The alert Christian Scientist ceaselessly strives in every direction for the satisfying crown of Godlikeness. To this end he exercises control over his thinking by entertaining spiritual ideas to the exclusion of sensuous notions and beliefs. Progressive demonstration in achieving his purpose is necessarily externalized in daily experience.

The demonstration of satisfaction must, however, be always in the line of Spirit. Any material desiderata attained are welcome only insofar as they attest and ratify spiritual growth. From this it follows that in demonstrating the true concept of home, for instance, one's delight is primarily in having learned that home is really a conscious dwelling in the realm of Mind, or Soul, connoting harmony, joy, beauty, grace, security. The temporal, or present, home, while cause for gratitude, is neither an end nor an aim in itself although the sense of comfort it conveys may serve as an incentive to attaining a diviner concept of its spiritual counterpart.

The Psalmist made this reassuring statement: "Blessed is the man that walketh not in the counsel of the ungodly. . . . But his delight is in the law of the Lord. . . . And whatsoever he doeth shall prosper."Ps. 1:1-3; Christian Scientists are demonstrating in their daily affairs that Godlike thinking serves not only to adjust unsatisfactory conditions, but also to deter the development of untoward circumstances and to bring the manifestation of satisfaction into their daily lives.

In our quest for satisfaction it behooves us as Christian Scientists to include humanity at large in the blessings we would have our heavenly Father-Mother God bestow upon us. Our prayers, applied universally, break the mesmerism of self and redound more readily to our spiritual progress.

Jesus' universal prayers brought untold blessings to humanity not only in his day but down through the centuries. His was an unselfed existence, for he perceived that spirituality alone can satisfy the human need. He knew that healing consists in filling consciousness with Godlike thoughts. It was the constant ascendancy in his own consciousness of God's fullness that empowered him to embrace humanity in his progressively higher demonstrations of the healing Christ, the divine manifestation of God.

In the pilgrimage from earth to heaven, from the relative sense of good to the absolute, the path leading upward may be strewn with thorns of suffering imposed by thoughts not one's own; yet cleared of resentment, the path is cleared of injustice, giving way to Immanuel, or "God with us."

In this gradual day-to-day ascent, we drop binding restrictive human ties for the liberating and expansive fellowship rooted in Mind, the beauties of sense are transformed into the beauty of holiness, mortality cedes to immortality, and all the while the pilgrim, joining the Psalmist in his prayer, repeats, "I will behold thy face in righteousness: I shall be satisfied, when I awake, with thy likeness."Ps. 17:15. 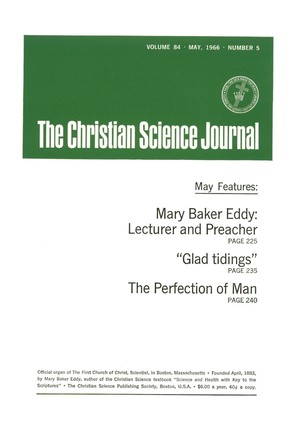 Thine, O Lord, is the greatness, and the power,...

The Whole Armor of Defense

The Importance of "right foot" Treatment

Let your conversation be as it becometh...

THE LOVE THAT FEEDS THE SHEEP

"Where two or three are gathered together"

The Perfection of Man

Modern Times Should Be Progressive

"Keep looking up, not down"

"The substance of an idea"

Christian Science: A spark on campus