"It is more blessed to give than to receive" (Acts 20:35). I have gained so much good from reading the Christian Science periodicals that I desire to give in one of them my expression of gratitude for the many blessings which I have received through the teachings of the Holy Scriptures and of the textbook, "Science and Health with Key to the Scriptures" by our beloved Leader, Mary Baker Eddy.

In 1898 I became deeply interested in Christian Science through reading a copy of the Journal. At that time I was troubled with a ruptured condition which the physicians said nothing but a surgical operation could relieve. After reading articles and testimonies in the Journal, I felt certain that I too could be healed through the power of God.

The next morning I went to the office of a practitioner, whose address I found in the Journal. He asked me what my "seeming trouble" was. This sounded rather strange to me. I took out the truss I had been wearing and showed it to him. I told him that I had read a Journal the previous evening and was convinced that I could be healed; that I had walked fifty-one blocks to his office without the truss and had not suffered any pain, whereas before this I could not stand for any length of time or walk without suffering severe pains unless I wore a truss. Then he said, "Your faith has made you whole; you do not need any treatments." I replied, "Oh, yes, I must have some kind of treatments, for the doctors have said I must have an operation, and I have made all arrangements." So he gave me a present treatment and a week's absent treatment, and by then I was fully convinced that I was healed and would remain so. From that day until this I have not been troubled with that condition; in fact, I have not been confined to the house one day from sickness, although I have had to battle with some severe attacks of illness.

Recently I have been able to give up the use of glasses, which I had been wearing for about twenty years.

While I am grateful for many physical healings, I am much more grateful for a better understanding of God and His beloved Son, Christ Jesus, and that through the teachings of Christian Science, given us by our inspired Leader, we can at least begin to do the works which Jesus said we should do also.

"My prayer, some daily good to do
To Thine, for Thee;
An offering pure of Love, whereto
God leadeth me."

I am deeply grateful also for class instruction from one of our Leader's students. —Leonard Perry, Washington, District of Columbia. 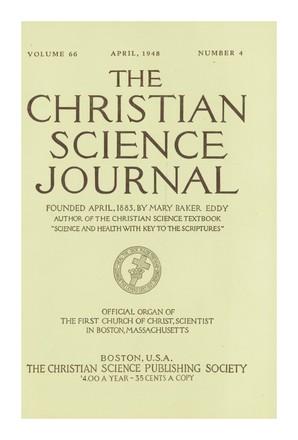 THE CODE OF ETHICS IN CHRISTIAN SCIENCE

HOW GOD FEEDS US

"THE LANGUAGE OF SPIRIT"

THE OPERATION OF DIVINE PRINCIPLE

THE SACRED PRIVILEGE OF CHURCH BUILDING

THERE IS A WAY OUT

LEARNING TO WALK AND NOT FAINT