Have you ever heard the expression, "rules are made to be broken?"

Some people think that—especially when they believe rules keep them from having a good time. But sometimes they don't like the rules because they don't understand them. The Ten Commandments (see Ex. 20:3-17) are often misunderstood that way. They seem full of "Thou shalt nots" instead of "Thou shalts."

Who likes being told "Don't do this" and "Don't do that"? Probably nobody. But there's actually something more to the Commandments than the negative side, and that's the "Thou shalt" side.

For instance, what is the opposite of stealing? How about giving or acting generously? So, rather than obeying the Eighth Commandment simply by not stealing, everybody has the freedom to express the Godlike quality of love by being unselfish and generous.

Other commandments, such as the ones about not killing and not coveting things that are precious to others, also come back to love. It's impossible to love and to hate at the same time. So if you were trying to love everyone, you would also have to love your enemies and not want to hurt them or take away things that they value. Plus, you would get to know something important about an enemy, which is: If everyone is made by Love, then no one really wants to behave in a way that would harm another—not you and not an enemy, either.

Understanding the Commandments doesn't just heal relationships. It also heals bodies. This happened to me when I found a growth on one of my fingers. At first, I was scared. But as I prayed with the First Commandment as my guide, I started to understand the freedom of having only one God. This helped me look away from the problem. Not because I was afraid of it, but because I wanted to understand more about God and to understand myself better—to know what God knew about me. Mary Baker Eddy knew the power of the First Commandment. In Science and Health she explained that it's this commandment that enables each person to demonstrate "health, holiness, and life eternal" (p. 340). That certainly was what I wanted to do!

Later on, I realized that by not looking at the growth, I was also obeying the Second Commandment. Since a graven image is anything that's not like God, I saw that I was obeying that commandment every time I chose to keep something Godlike in my thoughts. The growth on my finger wasn't Godlike so I didn't need to keep it.

It took me a long time to understand the freedoms of the First and Second Commandments so completely that I didn't even think about the growth any more. But that's eventually what happened. And the growth went away.

The Commandments tell the truth about God and about who each person really is. And that means that they're actually rules that liberate instead of limit.

What freedoms can you find in the Commandments? 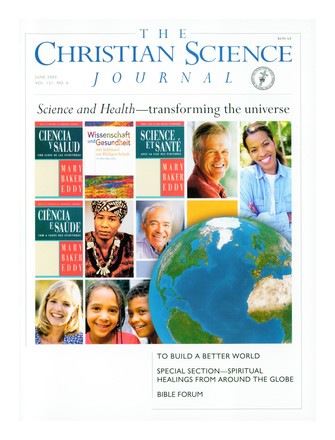 Praying with my eyes wide open

To build a better world, you need a solid foundation

What a soldier can do

How I pray about child abuse

A prayer for action

How I'm praying to make a better world

Praying for peace among religions

A book that transforms lives

'This book is true'

'. . . this book changes people for the better'

'I was able to sing that Saturday'

Over to you, Kinshasa!

'Now I can swim without fear'