One evening I was feeling very low and went for a drive. It was a difficult time in my life. I headed for the city, about four miles from my home, praying the whole way. My prayer was based on the truth of God as the only cause. As Mary Baker Eddy states in Science and Health with Key to the Scriptures: “There is but one primal cause. Therefore there can be no effect from any other cause, and there can be no reality in aught which does not proceed from this great and only cause” (p. 207).

As I drove into the city and approached a set of traffic lights, I saw a crowd of young men. At the time, this city was known for disturbances due to excessive alcohol consumption. As I got nearer the lights, I could also see a small car with a couple inside, looking terrified. The young men, about a dozen in total—half on one side of the car, the rest on the other side—were rocking it from side to side so that it couldn’t grip the road. The driver wasn’t able to drive the car even though he was revving the engine in an attempt to get away.

I stopped my car. Then I saw a police car drive past the incident without stopping. This surprised me! I desperately wanted to help, and I felt impelled to get out of my car and walk towards the young men. I’m sure I was sticking with my prayer of recognizing God, good, as the only power. Then, as soon as I reached the young men, they stopped rocking the car and simply walked away. They just dispersed! The small car then quickly drove off.

As I reflected on this incident, I thought about my prayers as I drove into town and how prayer has a far-reaching effect, far more than I was imagining at the time. Though my life during that time was not easy, praying to understand God as the only cause, the only power, enabled me to be a blessing to others. The story of how things in my life progressed after that is a long one, but the short of it is that progress was eventually made, and all the credit goes to Christian Science.

In the book of Isaiah it states: “Violence shall no more be heard in thy land, wasting nor destruction within thy borders; but thou shalt call thy walls Salvation, and thy gates Praise” (60:18). I feel I had, to some degree, witnessed this. 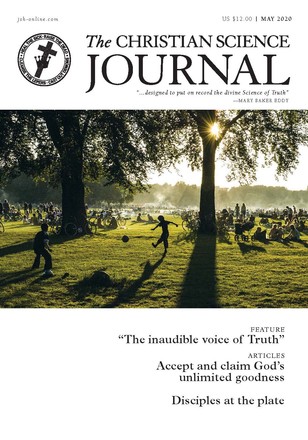 “The inaudible voice of Truth”

What truly governs us?

No job too small

Water on the road

A turning point with a coworker

Reading Rooms and the activity of Christ, Truth

Disciples at the plate

“When sorrow is healed”