There seem to be so many in our world right now who are seeking a home, a secure and safe place to live. Our prayers for mankind can support individuals everywhere by affirming God’s unconditional, impartial love and provision for each of His children. I’ve often prayed with a passage from the book of Ezekiel in the Bible, in which God says of the children of Israel, “I will place them” (37:26).

At one point not that long ago, my husband and I relocated to a city on the East Coast because of my employment. We felt it was right to purchase a home, but we had no idea where to even start looking, so we prayed for guidance. I thought about Christ Jesus’ words in the Sermon on the Mount: “Seek, and ye shall find” (Matthew 7:7). We were seeking to understand and follow God’s will, instead of outlining exactly what we should have. So it seemed natural that we would find what would meet our needs. This honest seeking freed us from any sense of fear, or from being anxious about how everything would come together. That next week we were led to the perfect home for the perfect price in just the right area.

We soon signed the papers to start the home loan process. I might add that we had to put a large sum down, which we would then get back at closing. A dear friend loaned us this amount of money, so it was important that everything run smoothly. We got what was called an adjustable-rate mortgage, which meant that in five years the interest rate on the loan would no longer be locked in and could possibly be raised significantly. We assumed, like many others at the time, that we would be able to sell our home before the interest rate was no longer locked in, not knowing about the housing meltdown which lay ahead.

While our application for a home loan was being processed, we found out that the organization my husband and I both worked for would be downsizing, and because of economic reasons, there would be major layoffs. If we lost our jobs, it would mean not being able to buy our home and possibly losing the money my friend had loaned me.

During this time we learned, much like the children of Israel in the Old Testament who were given just enough manna each day, to be grateful each day for our employment. We learned to “trust in the Lord with all thine heart,” as it says in Proverbs 3:5. We had no choice but to take each day at a time and trust God completely with our future, rather than entertaining worrisome thoughts about what might happen. We both continued to be employed, and I also prayed to know that those who were laid off were tenderly cared for by God. Our home loan was finalized, and we were able to pay back my friend’s loan.

Our home was on the first floor of a three-story building that included two other condominiums. The neighbors right above us were college kids who quite often had loud parties during the workweek, which kept us awake many nights. We prayed to love our neighbors, as it says in the Bible, and we tried to reason with them, but they refused to stop the parties.

The healing finally came when an all-night party started up and I decided to refuse feelings of irritation and resentment, and instead to be humbly willing to stay up all night and pray, seeing our neighbors as God’s children, under the influence of good. The effectiveness of this prayer was evident. Shortly after that night, these neighbors became friendly toward us, and they soon sold their condominium and moved, and a most considerate new neighbor moved in.

Finally, after five years, we had to relocate to the other side of the country. The housing meltdown was in full swing, and the value of our home had declined so much that if we sold at that time, we would barely break even. And we thought it would be impossible to rent out this home while living so far away. Besides, our interest rate, which was no longer locked in, could skyrocket.

We prayed with the idea that “… all things are possible to God …” (Mary Baker Eddy, Science and Health with Key to the Scriptures, p. 1), and this helped dissolve limited thinking and open our thought to infinite possibilities. Despite the circumstances, we were able to rent our place for five years with no problems, and our interest rate on our loan was the best it could have been. In fact, it even went down.

After five years, we were able to sell our place and make a fair profit on our investment. There was no loss, only gain, and we learned many wonderful spiritual lessons along the way. 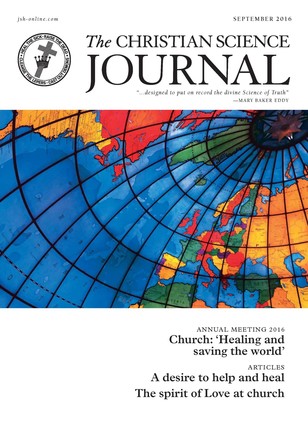 Church: ‘Healing and saving the world’

from the Clerk of The Mother Church | September 2016

A desire to help and heal

The fruits of Christly prayer

The spirit of Love at church

Is there a recipe for spiritual healing?

A life restored by reading Science and Health

The significance of two or three