“Put an end to falsities,” “challenge universal indifference,” bear witness to “the Christ mode of understanding Life,” and “proclaim Truth so winningly that an honest, fervid affection for the race is found adequate for the emancipation of the race.” These are just part of Mary Baker Eddy’s directives to the Board of Lectureship in her letter published in The First Church of Christ, Scientist, and Miscellany. (See the full letter on pages 248 and 249.)

In the last few months we’ve received some wonderful reports of healing during lectures. Healings of a back injury, double vision, warts, a paralyzed leg, a lump in the breast, and blindness are among them. One person wrote that for the first time in almost 20 years she felt the presence of God. Another said she’d been struggling to feel God’s love for a long time, and now she does. We’ve also heard about healings of financial and employment struggles immediately following a lecture.

Individuals and families have begun coming to church for the first time, and others have returned after many years of having not attended. Members of other faith groups, including clergy, have said that misinformed concepts about Christian Science have been overturned. Soon after hearing a lecture sponsored by a Christian Science college organization (CSO), an assistant chaplain of another denomination shared that she’d helped to correct misconceptions about Christian Science at an interfaith conference when other participants were making untrue statements about it. Medical professionals who’ve attended a lecture have reported that they have been benefited by reading Science and Health. Even folks just within earshot of a lecture, such as prison guards, have asked for the book. One sound technician told a lecturer that he had already read 30 pages of it as he was waiting for people to leave after the lecture.

We’re hearing these kinds of reports from all over the world, and from church groups big and small.

Rather than having lectures focused specifically on topics such as handling violence, addiction, or unemployment, we’re striving to offer lectures that address the issue behind the issues, so to speak. When this is done effectively, someone will leave a lecture not only with answers to a personal or societal topic but also with a new sense of “Life in and of Spirit” (Mary Baker Eddy, Miscellaneous Writings 1883–1896, p. 24), and how to find out more about it. It’s that “Christ mode of understanding Life” at the heart of Mary Baker Eddy’s unique discovery that we’re working to make clear. Primary to this goal is responding to misconceptions about Christian Science and giving a true idea of who Mary Baker Eddy is and what her life means to the world. (See By-Laws pertaining to the Board of Lectureship in Mary Baker Eddy’s Church Manual, beginning on page 93.)

The leavening effect of a lecture isn’t based on the person giving it any more than the members planning the event. Well-spoken words and kind motives alone don’t clear up misconceptions and heal. The spirit of Truth—Christ meeting human consciousness—does that, and so the sponsors of the lecture and the lecturer are equal partners in recognizing and feeling this Christ in new ways before, during, and after the lecture. Lectures heal only to the degree that this is accomplished.

It could be said today that billions of “unprejudiced minds—simple seekers for Truth, weary wanderers, athirst in the desert—are waiting and watching for rest and drink” (Mary Baker Eddy, Science and Health with Key to the Scriptures, p. 570). And it helps to know that what we are sometimes tempted to see as a lack of receptivity is no more an accurate account of a person’s true mind or character than the appearance of some sickness or accident. By making our own deeper discoveries about man’s true nature here and now—including each individual’s inherent receptivity to the spirit of Truth—we are increasingly equipped to see and prove such receptivity in our own communities.

That doesn’t mean that every person will come to a lecture or take up the study of Christian Science. But it is a lot easier to talk to people about it and share together when we recognize that every individual is already connected with universal Truth and inherently loves it.

To clear up misconceptions about Christian Science and its discoverer, and to proclaim Truth “winningly” with the level of affection that Mrs. Eddy describes in her letter to the Board of Lectureship referenced earlier, means communicating deep and bold ideas in the most humble and universally accessible ways. We’re grateful for how this is already being accomplished and are dedicated to progressing even further in this direction. We want anyone to feel comfortable and confident—thrilled, even—to invite friends, colleagues, and fellow members of the community to a lecture on Christian Science.

As we continue forward, we invite your feedback at lecture@christianscience.com—including fruitage and ideas for improvement—and we want you to know we appreciate your partnership. Fulfilling Mary Baker Eddy’s vision for this Board of Lectureship is a collective demonstration of all the members of our Church.

In accordance with Article XXXI, Section 1, of the Church Manual, the Christian Science Board of Directors has elected the following members to serve as lecturers from July 1, 2016, through June 30, 2017. 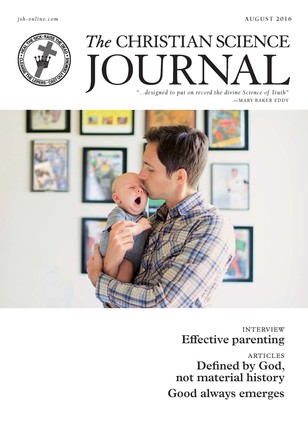