Perhaps few words in the English language have been so misunderstood as the word meek, the object of Christ Jesus’ third beatitude: “Blessed are the meek: for they shall inherit the earth” (Matthew 5:5).

By popular reckoning, meek means weak. However, the authoritative teachings of the Bible and Christian Science correlate meekness with invincible strength.

Christian Science teaches that such strength is an expression, through man, of God’s infinite power over all error and discord. That it is the logical outcome of man’s spiritual understanding of God and of man’s eternal unity with Him.

In her writings, Mary Baker Eddy, the Discoverer of Christian Science, often associates meekness with might, and also contrasts it with a false, material sense of power. In Science and Health with Key to the Scriptures, she writes, “The notion that animal natures can possibly give force to character is too absurd for consideration, when we remember that through spiritual ascendency our Lord and Master healed the sick, raised the dead, and commanded even the winds and waves to obey him” (p. 67).

The link between meekness and might was defined by Jesus himself in these words: “The Son can do nothing of himself, but what he seeth the Father do” (John 5:19). This explains how Jesus could at the same time be a shepherd and a sheep—a shepherd to those whom God gave him out of the world, and a sheep in his relation to God.

Psalm 37 declares, “The meek shall inherit the earth” (verse 11), and Jesus repeats that idea in his Sermon on the Mount, as quoted earlier. That promise indicates, in the estimation of one Bible commentary, that the meek shall inhabit the exalted positions on earth: “Being men of peace now, they shall be the fit administrators in the coming kingdom of the Prince of Peace upon earth” (Robert Jamieson, A. R. Fausset, and David Brown, A Commentary on the Old and New Testaments, Vol. II, p. 180).

Meekness is not the absence of power but the “fruit of power,” according to one Bible dictionary. “The common assumption is that when a man is meek it is because he cannot help himself; but the Lord was ‘meek’ because he had the infinite resources of God at [his] command” (W. E. Vine, Vine’s Complete Expository Dictionary of Old and New Testament Words, p. 401).

“The meek are God-trusters and God-defenders,” The Interpreter’s Bible says. “Therefore they are strong. Their nerves are steady, and they never know when they are beaten. Indeed, they know that if they are in agreement with God they cannot be beaten. Their morale is unbreakable” (Vol. IV, p. 195).

“The pride of priesthood is the prince of this world,” Science and Health says. “It has nothing in Christ. Meekness and charity have divine authority” (p. 270).

Donning the quality of meekness means shedding arrogance, vanity, self-assertion, and conceit. This is the price to be paid for the rich inheritance of the kingdom of God.

The Bible is filled with examples of meekness and its rewards: Moses’ response to his sister Miriam’s rebelliousness, and their resulting reconciliation; Abraham’s generosity toward Lot, and God’s promise that Abraham and his seed would inherit all the land he could see in every direction; Jesus’ yielding to God’s will at Gethsemane, and his subsequent resurrection.

Perhaps the most compelling biblical example of meekness, after the Master’s, was that of the woman often identified as Mary Magdalene, whose humility, contrition, and repentance are pointed out by Mrs. Eddy at the beginning of the chapter “Christian Science Practice” in Science and Health to illustrate the essential preconditions to Christian healing (see pp. 362–367). One might have expected that a chapter elucidating the rules for healing would begin with an account of Jesus’ healings—of the blind, of lepers, of the lame and halt. But Mrs. Eddy understood something deeper—the qualities of thought that open the door widest to the healing Christ—and starting with them is almost as if to say that without these qualities the rules for healing that fill the chapter will be of limited use.

“Who shall inherit the earth?” she asks in The First Church of Christ, Scientist, and Miscellany. “The meek, who sit at the feet of Truth, bathing the human understanding with tears of repentance and washing it clean from the taints of self-righteousness, hypocrisy, envy,—they shall inherit the earth, for ‘wisdom is justified of her children’ ” (p. 228).

Meekness, exemplified by the qualities of lowliness, long-suffering, and forbearance, as explained in Ephesians 4:2, stands as a rebuke to the ethos of an eye for an eye. Donning the quality of meekness means shedding arrogance, vanity, self-assertion, and conceit. This is the price to be paid for the rich inheritance of the kingdom of God.

One indication of Mrs. Eddy’s own meekness and forbearance is described in the reminiscence of one of her students, Joseph Mann: “I am grateful to have witnessed the pioneer spirit with which our beloved Leader fought ‘the good fight of faith.’ It was a restful warfare—a warfare that was as victorious in the beginning as it proved to be in the end, a warfare so replete with LOVE as to leave no battered, vanquished enemy in its wake!” (Reminiscence of Joseph Mann, p. 21; The Mary Baker Eddy Library; © The Mary Baker Eddy Collection).

The inward impulses of humility and kindness were writ large in Mrs. Eddy’s heart and imparted to her students from the earliest days of the movement she founded, as reflected in this admonition to The First Church of Christ, Scientist, in Boston regarding a “legal quibble”: “Do not, I implore you, stain the early history of Christian Science by the impulses of human will and pride; but let the divine will and the nobility of human meekness rule this business transaction, in obedience to the law of Love and the laws of our land” (Miscellaneous Writings, p. 141).

As the third beatitude indicates, meekness is a moral demand that gains sure entrance for humanity to the most exalted place: the kingdom of heaven. And as Christ Jesus’ very life and his ultimate triumph over the belief of material existence illustrate, the blessing that comes from obedience to the third beatitude is that the meek do in fact inherit the earth. 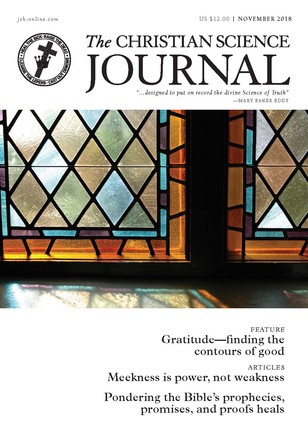