It might seem surprising that, after she discovered Christian Science, Mary Baker Eddy did not move immediately to establish her church. Actually, she hoped none would be needed. And some years would pass before she would be convinced of this necessity.

Mrs. Eddy initially felt that other denominations would embrace the revelation of Christian Science and the explanations provided on how to honor Christ Jesus’ command to heal the sick—and the striking healing work that results from putting these teachings into practice. But she also began to see that the adherents of her new religion, operating without the discipline of church, began to get off track. As one of her biographers explains: “Too many neophytes, attracted to her teachings but unwilling to accept the disciplines that are as much a part of any serious scientific endeavor as they are of any valid Christian commitment … were ending up as advocates of personalized versions of Christian Science that were neither Christian nor scientific” (Robert Peel, “The background of The Mother Church,” Journal, June 1982).

Thus it was that in 1879 she chartered her first church, eventually denominated The First Church of Christ, Scientist. Its exalted purpose is hinted at in the two words making up the Greek word for church (ekklesia): ek, meaning out of or away from; and a derivative of kaleo, meaning to call. This suggests that in addition to gathering together seekers of Truth, church exists to call us out of a mortal sense of existence and identity and into the understanding of man’s real spiritual nature. It is the spirit of God, or Holy Ghost, imparted at every Christian Science church service, that stirs thought, enabling every individual in the congregation to glimpse “a new heaven and a new earth” (Revelation 21:1).

In particular, church provides humanity’s refuge from the doctrines of natural science, scholastic theology, and materia medica that posit man as a material mortal irresistibly inclined to sin, disease, and death. Notwithstanding Mrs. Eddy’s great respect for the Protestant church in which she was raised, when she did form her church she divested it of all material activities and ceremonies—choirs, food and social events, the literal commemoration of the sacraments—knowing that to the extent that church appeals to material sense, it is deadening to spiritual sense. And it is thus that she prescribed the services of her church in the Manual of The Mother Church, whose provisions, she indicated, should stand for eternity.

“[M]ortal mind is calling for what immortal Mind alone can supply,” Mrs. Eddy wrote in her Miscellaneous Writings 1883–1896 (p. 365). And in the Christian Science textbook, Science and Health with Key to the Scriptures, she says: “Through spiritual sense only, man comprehends and loves Deity” (p. 481).

Church exists to call us out of a mortal sense of existence and identity and into the understanding of man’s real spiritual nature.

Considering what Mrs. Eddy regarded to be essential to the prospering of her church, it’s clear she understood the vital role of healing—the one thing, beyond all others, that distinguished her church and would break the world’s resistance to the words Christian Science. She states in Science and Health: “Jesus established his church and maintained his mission on a spiritual foundation of Christ-healing” (p. 136). As it happens, healing requires the kind of commitment and spiritual growth to which church—along with our prayers in support of church—contributes mightily. All of which stands in contrast to the notion, so widespread in contemporary society, that it is sufficient to be “spiritual but not religious”—that we can believe in God in a general way without reference to any specific theological definition or church organization.

Church is not a passive experience. If we ask, “What’s in it for me to attend church?” we’re asking the wrong question. There is obviously something very important in it for us, namely, a measure of spiritual growth that would be unattainable without church. But even if this weren’t the case, there is still this: Church needs us because mankind needs the healing truths of Christian Science. Christ Jesus didn’t do his work just for himself. He did it for mankind. It was a commitment of towering unselfishness. And for all the rest of us he had this reminder: “Freely ye have received, freely give” (Matthew 10:8).

Within every service at a Church of Christ, Scientist, is that pure, undefiled mental environment where, in the words of one of our hymns, “The white wings of the Holy Ghost / Stoop unseen o’er the heads of all” (John Greenleaf Whittier, Christian Science Hymnal, No. 229). It is where God’s Word has incontestable authority, inspiring, elevating, healing, regenerating, and “rousing the dormant understanding” (Science and Health, p. 583). In church the Word is imparted with gentleness and as the thunder of Sinai. Every word that issues forth from the desk at a Christian Science church service is invested with divine power to heal and transform.

There’s an instructive story in the fourth chapter of Luke. Christ Jesus goes into the synagogue in his hometown of Nazareth and is handed a scroll containing the book of Isaiah. And in front of a rapt audience he reads: “The Spirit of the Lord is upon me, because he hath anointed me to preach the gospel to the poor; he hath sent me to heal the brokenhearted, to preach deliverance to the captives, and recovering of sight to the blind, to set at liberty them that are bruised” (verse 18)—not just those who are physically bruised, but those, perhaps, who have been bruised emotionally by some unkind or unjust word or deed or circumstance. When he finishes, he hands the scroll back and sits down. A portentous pause follows. Then he gets to the point: “This day,” he says, revealing his role as the prophesied Messiah, “is this scripture fulfilled in your ears” (verse 21).

Like Christ Jesus, we must say and know at every Sunday service or Wednesday testimony meeting of a Church of Christ, Scientist—here, now, on this day, in this place, at this time, this Truth is fulfilled in our ears. This service has mended the broken heart. It has delivered the captive. It has restored sight to the blind. It has raised up the infirm. This Truth, along with our prayers affirming it, has been powerful, effective, and instantaneous in its effect. Not one humbly receptive person can enter here who is not powerfully moved by and healed by the Truth.

And thus it is that the church Mrs. Eddy established has become a beacon for the ages, providing the indispensable guide to human salvation. 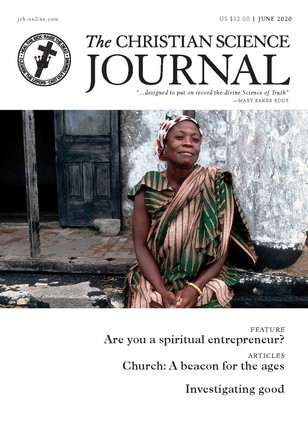