The metaphysics of Christian Science is effective in increasing the quality and efficiency in group action. Business and community enterprises today are so complex that planning and action are initiated and carried out by groups of specialists. A team of experts, a committee, or a corporation usually replaces one-man enterprise. And compromise and conservatism as often replace unity and boldness.

Social science analyzes group dynamics and suggests human methods, sometimes helpful, always limited to human conceptions. Christian Science presents a spiritual method. According to this Science, reality and the laws which control it are spiritual, created by one Mind, God; they are absolute. As the individual scientifically applies the absolute truth to his human situation, his understanding and character are transformed. His experience then begins to pattern the harmony and law of divine reality.

As one member of a group changes, all relationships to that member are forced to change, and therefore the entire group changes. And so as one member of the group understands the spiritual reality of demand, ideas, and action, he can use this truth to help the entire group bring out better results. Spiritual understanding of Truth, Mind, and Love demonstrates specific laws of God, for Truth, Mind, and Love are synonymous with God. To the extent that initiative, plan, and work are based on spiritual laws, they are intelligent, efficient, and free from the stifling conflicts of human personalities.

I applied the three dicta outlined later in this article for the first time while I was serving on a committee with a chairman possessed by a desire to appear successful to his superiors. His meticulous assignments and persistent guidance in carrying them out seemed helpful; but I soon saw that this method stifled experiment. He felt strongly about everything and referred to us as "my committee." As the committee shaped its final recommendations, an undercurrent of irritation broke into rivalry. I considered resigning.

It came to me to analyze the problem in the light of Christian Science first. In my prayerful metaphysical realization I did not seek to influence the thoughts of others. In the discussion I made my points conform to what I knew to be spiritually true, and the effect was to lessen the discords and bring out the truly inspired work of the committee. A more productive atmosphere set in; the reports were less structured, and some new plans were presented. I decided to stay.

In my application of Christian Science metaphysics I saw clearly that Truth makes the demand, Mind produces the ideas, and Love impels the work.

In all types of group activity one needs to question, "What is making the demand: an opportunity, a problem, an executive, a clique?" Mrs. Eddy writes in Science and Health (p. 184), "Truth, Life, and Love are the only legitimate and eternal demands on man, and they are spiritual lawgivers, enforcing obedience through divine statutes."

The demand may appear discomforting to the human mind and be misinterpreted as a human pressure producing personal responses of reaction, resentment, and resistance to change. If it is understood, however, that Truth's demand initiates the group's work, there will be less personal defensiveness, emotional reaction, rivalry, or fear to interfere with the formulation of workable plans by the members; and group efficiency will be greatly increased.

Individual reliability is expressed spontaneously when the group effort is seen as taking place in the vibrant, healthy atmosphere of Truth's demanding. Here the individual feels trusted and valued. Discerning the infinite but legitimate demand of Truth, he humbly reaches for resources outside himself. He begins to find the spiritual resources of his own true individuality reflecting infinite God. He experiences the thrill of functioning in a state of thought beyond his ordinary human capacity. For Truth's demands are not small. They call for the highest expressions of trustworthiness, fearless morality, inspired logic, intelligence, and skill. These qualities are best expressed by the member who most clearly understands that his true individuality reflects God's absolute perfection.

Truth, the Lawgiver, demands and produces harmony and freedom. Man-made methods and rules are insufficient to enforce obedience. Where spiritual law, not person, is felt to govern a group, dictatorial leadership does not occur. Any required discipline exercised under Truth's demand for harmony and freedom is loving, impersonal; and members accede readily.

Not only are these demands legitimate, but they are eternal, that is, timeless. As one realizes this, the group members are freed from the false sense of time and pressure which would force short-range solutions. The demands of Truth are insistent but without time limits.

If a human problem is accepted as the demand, solutions and plans will be limited by the confines of the problem. Problems do not outline their solutions. By turning to God, the one universal Mind, thought becomes occupied with totally different, often radically new, means which take the solution great strides beyond a single step forward. What can fulfill an infinite demand? Only infinite Mind, God. Truth makes the demand. Mind produces the ideas. Mind knows what Truth is demanding.

Interpreting the Genesis account of God's creating of the stars and of the two great lights to rule the day and the night, Mrs. Eddy states (Science and Health, pp. 510, 511): "Science reveals only one Mind, and this one shining by its own light and governing the universe, including man, in perfect harmony. This Mind forms ideas, its own images, subdivides and radiates their borrowed light, intelligence, and so explains the Scripture phrase, 'whose seed is in itself.'"

What a clear explanation of God's method of creation! Ideas formed by one Mind! They are not produced by bouncing one idea off another. They do not spawn each other. They do not conflict. One Mind alone produces them. Mind's ideas are complete and perfect, needing no revision. They reflect beauty and order; and their unfolding is perfect. Infinite Mind has an inexhaustible supply of ideas. Their radiating intelligence attracts, and no coercion is necessary to persuade.

Those who demonstrate these spiritual ideas will formulate human plans which are bold, complete, and beautiful. The expression itself, graphic, oral, or delineated in another way, will develop naturally, as does the spiritual idea from the seed within itself. Such human plans, expressing intelligence and art, accomplish their purposes. No long testing periods of trial and error will be needed to prove them out.

A human plan based on Mind's ideas is fearlessly moral. It never requires an ethical compromise, although human compromise may appear in the process of working out such a plan. When it has been worked out from a spiritual basis, intelligence and fairness bring justice to all. No one can be harmed, and no good can be displaced by a plan patterned after Mind's ideas. Mortal mind, which attempts to create and possess ideas, must be discarded. Its personal suggestions are crude, exhaustible, lacking scope and brilliance.

To distinguish a plan based on Mind's ideas, from a plan based on personal suggestions, we must discern the original which each patterns. Does it pattern the purpose and intelligence of a divine idea, or is it patterned merely on personal desire and materialistic reasoning? Intelligently worked-out plans work out intelligently. Talk has not produced them. And plans that are not produced by talk cannot remain in a talking stage. They are carried out.

Speaking of God as Love, Mrs. Eddy says in "Miscellaneous Writings" (p. 358), "Love impels good works." Divine Love is the tender persuader motivating the real man and causing him to act according to Mind's purpose. This is a law of Love. Even one member of the group applying the power of Love according to the metaphysical method of Christian Science will help to destroy friction and demonstrate the spiritual laws governing action. He loves his fellow workers; he loves himself in a true spiritual sense; he loves his work.

All that can be accomplished must be done through the quiet catalytic power of love. Greatly loved tasks are done with effortless freedom. Neither time, nor muscle, nor calculation inhibits. True love inspires, coordinates, and speeds group work. Every member becomes an ergophile. How right Paul was when he wrote (Gal. 5:6), "In Jesus Christ neither circumcision availeth any thing, nor uncircumcision; but faith which worketh by love"!

Whoever expresses the "faith which worketh by love" expedites action and benefits the group, whether that group is a family, a committee, or a corporation. The Love which gave Moses the Ten Commandments blessed a nation (Ex. 18:13-27). The Love through which Christ Jesus healed the nobleman's son also converted a whole household (see John 4:45-53). The Love which revealed Christian Science to Mrs. Eddy gave her consummate skill in dealing with the press, the courts, her church, and audiences of thousands.

Truth makes the demand, Mind produces the ideas, and Love impels the work. 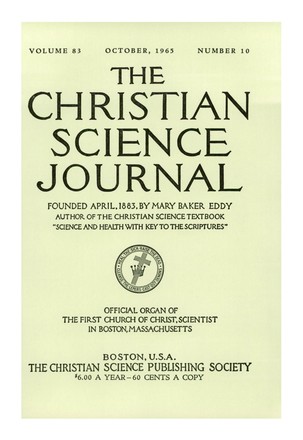 THE TOOLS FOR SPIRITUAL CITIZENSHIP

"THE FIELD IS THE WORLD"

HOW A SENTINEL BECAME A MISSIONARY

ATTORNEY FOR THE DEFENSE

CARING FOR THE CHILDREN

"HOW CAN THERE BE MORE THAN ALL?"

THE PENETRATING LIGHT OF IDEAS