I am grateful to share an experience that proves we can safely rely on God in an emergency situation. I learned that, with God’s help, we never have to wait for assistance. God is available at the moment we need Him, wherever we are.

One day in late 2006, I was alone in my apartment, lying in bed because of severe hemorrhaging. Parts of my body were becoming numb, and it felt as though the life were literally being drained out of me.

This situation was an extreme instance of a milder condition that had been ongoing for almost two years. Although I had relied on Christian Science to heal this problem from the start, on this particular day I came to a point where I knew I really had to trust God and to focus my prayers.

I was also battling feelings of depression and loneliness. It happened to be the day after Thanksgiving, and I had spent the holiday alone eating instant pancakes, while my whole family was on the other side of the country.

I saw clearly that there was a decision to be made. Either I could continue to spiral downward into disease and depression, or I could stand up for what was true about my identity as the reflection of God, free of anything unlike God, good.

Over the past few years, I had worked with several Christian Science practitioners at different times to heal this condition through prayer. One topic we had addressed was the feeling that certain individuals may not deserve healing because of mistakes made in the past. I felt as though I was being justly punished for some poor decisions and had no right to challenge my “fate.”

However, Mary Baker Eddy addresses this misconception in the Christian Science textbook, Science and Health with Key to the Scriptures. What she brings out, and what helped me so much during this two-year period, is that in reality God is our Father-Mother, always loving us, totally unaware of any material past. As the idea of God, I saw that God created me to express and experience only good, and that I wasn’t prone to suffer for making mistakes.

I prayed about many other things during this time, too. And I believe the spiritual growth I went through laid the groundwork for complete healing.

On that day in 2006, lying in bed, I chose to turn wholeheartedly to God, whom I knew to be Life itself. While reading the weekly Christian Science Bible Lesson, I drank in the ideas with childlike trust. Before that day, I had often qualified a number of spiritual truths in the Lessons with the statement, “Yeah, but this is not true for me!” This time, however, I allowed the ideas to sweep over me and sink in. I quickly gained confidence that healing was inevitable.

Then I had a major revelation. I thought about a Christian Science healing I was aware of, in which a woman prayed for a long time to heal a persistent problem. As I saw it, what finally led her to healing was the realization that a part of her had actually wanted to have this problem. As Eddy writes, “Whatever is cherished in mortal mind as the physical condition is imaged forth on the body” (Science and Health, p. 411). This woman had made the problem such an integral part of her identity that she was almost unwilling to give it up. Once she realized how ridiculous that was, she was healed.

I frankly laughed hard when I thought of this testimony because I realized that I, too, was wanting to remain ill. How silly! I saw how much I identified myself with both the past mistakes, as well as the physical condition. In fact, I had not wanted to let either of them go and to move forward with my life.

At that moment of realization, the bleeding stopped. I even started feeling restless, lying in bed yet feeling perfectly well.

I thought about what I would do if this was a normal day. I was a graduate student at the time, and I had several large papers to write that were due the following week. I thought that if I was completely healed, I would get up and write those papers. So, I got right up with strength and joy. I went outside and hopped on my bike. After riding for two miles to a local cafe, I ate lunch and then made significant progress on my schoolwork.

I was completely and permanently healed of the physical problem. And my life was transformed. 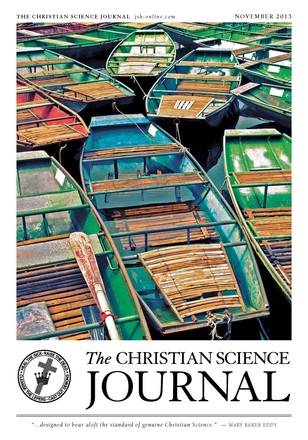 Giving the gift of JSH-Online

True entitlement for all

From the Christian Science Board of Lectureship | November 2013

God and the Higgs boson

What our Bible study group is learning

The living God: not absent or abstract

The ‘eternal version’ of the Bible

A valuable asset for the Church and the world

The ‘hem’ of humility

Sonnet to translators of God’s Word

Healing prayer for a pet

Do you think there’s a tendency to take a practitioner’s work for granted?