Worldwide attention to what’s going on with the earth’s climate has intensified in recent years. While the research and public discussions today relate to the world’s climate as a whole, climate conditions and destructive weather have affected people since the most ancient of times.

In different parts of the Bible there are mentions of storms and droughts. The Sea of Galilee in Israel, for instance, was and is prone to violent or heavy winds. The geography of the sea (really a large lake) and its surrounding land, together with the climate of the region, makes it susceptible to sudden, strong storms.

During one of these, Christ Jesus was out on the lake in a boat with his disciples (see Mark 4:36–40). According to the Bible, the wind raged and the waves beat into the boat, nearly filling it with water. Jesus was asleep in the back of the boat. When the disciples woke him because they were afraid for their lives, the Bible says that “he arose, and rebuked the wind, and said unto the sea, Peace, be still. And the wind ceased, and there was a great calm. And he said unto them, Why are ye so fearful? how is it that ye have no faith?”

The apparent laws and circumstances of geography and climate that seemed to be putting them all in danger at that moment didn’t impress the Master. Despite the noise of the storm and the boat rocking and filling with water, Jesus had been peacefully asleep. And when the disciples woke him, he was immediately able to still the storm with a few words.

In reading this account, it seems clear that Jesus was conscious of something the disciples were not, something that his teachings often centered on—the presence of the kingdom of heaven. This kingdom is spiritual reality, in which God’s goodness and harmony reign supreme. Jesus knew the kingdom of heaven to be “at hand” (see, for example, Matthew 4:17). And his understanding of this enabled him to still that storm instantly, proving the presence, right then and there, of God’s harmony.

We don’t usually think of Jesus as a climate scientist. But he was a scientist infinitely beyond the world’s common view of science, because he understood God and His creation and the laws that govern creation. And he could prove the truth of what he knew. Mary Baker Eddy, who discovered and founded Christian Science, wrote: “Jesus of Nazareth was the most scientific man that ever trod the globe. He plunged beneath the material surface of things, and found the spiritual cause” (Science and Health with Key to the Scriptures, p. 313).

As the Son of God, Jesus knew his Father and the nature of what God has created. Jesus said, “As the Father knoweth me, even so know I the Father” (John 10:15). And elsewhere, “For the Father loveth the Son, and sheweth him all things that himself doeth” (John 5:20).

Jesus’ knowledge of spiritual reality stemmed from the fact that his true selfhood, the Christ, was the manifestation of God. All that God, the divine Mind, eternally knows is manifested in the Christ, and this fact imbued Jesus with unparalleled divine understanding, which gave him his dominion over the physical sense of life and its discords.

Today, humanity has concerns not just about isolated incidents of violent weather, but about longer-range fears that the climate is changing in ways that may make the weather more violent more often, increase instances of extreme heat, and raise ocean levels. Humanity’s solid conviction that matter is the substance and intelligence of life brings with it the fear that matter can cause harm for the whole human family, and this belief and fear are borne out in humanity’s collective experience.

The reason for this is that mortal mind—meaning the collective conscious and unconscious thoughts and characteristics of mortals—objectifies itself in the material universe. In other words, matter is the outward expression, the solid appearing, of mortal mind. So, whatever appropriate actions governments and world citizens may take to address climate concerns, in addition there is a need to address through prayer the underlying mental causes of what we see happening in the world’s atmosphere.

Mrs. Eddy once wrote about this and how the atmosphere we live in can be improved. When asked by The Boston Globe to comment on “what the last Thanksgiving Day of the nineteenth century should signify to all mankind,” Mrs. Eddy’s reply included this statement: It signifies, she wrote, “that the atmosphere of the human mind, when cleansed of self and permeated with divine Love, will reflect this purified subjective state in clearer skies, less thunderbolts, tornadoes, and extremes of heat and cold;…” (The First Church of Christ, Scientist, and Miscellany, pp. 264–265).

The “self” that needs to be washed away from human thought is all wrapped up in the underlying belief that mortal mind is an actual mind opposed to God; that this mind manifests itself widely as selfishness, self-will, anger, lust, greed, dishonesty, hate, and so on; and that these mortal traits show themselves in the anger and disturbances we see in human society and governments, as well as in the imbalance and destructiveness of our earth’s atmosphere.

But the reality is that we don’t actually live in a disturbed, mortal concept of life. As St. Paul said, “we live, and move, and have our being” in God (Acts 17:28). Living in the infinitude of God means we dwell in the kingdom of heaven, in the infinite goodness of Spirit, not in the limitations and evils of materiality. An evil, limited, destructive sense of self has no place in the infinitude of God.

The purification of collective human consciousness will bring greater peace to the physical atmosphere.

In the Glossary of the textbook of Christian Science, Science and Health, Mrs. Eddy gives the spiritual sense of the kingdom of heaven, showing it to be not a place we go to in the hereafter, but the infinite allness of divine good, which we can increasingly understand and experience right here. She describes it as “the reign of harmony in divine Science; the realm of unerring, eternal, and omnipotent Mind; the atmosphere of Spirit, where Soul is supreme” (p. 590).

Praying to understand that we abide in this kingdom, we begin to discern that we are right now living under the divine laws that govern the universe harmoniously. God’s laws are never destructive, nor do they allow anything destructive to exist. God is Life, and the laws of Life uphold the immortality of all life. God is Love, and the laws of divine Love forever bless and enrich all creation, keeping all safe.

This heavenly kingdom isn’t discerned materially. But as the prayers of many, or even a relative few, reach out for a higher understanding of spiritual truth, the Christ and Holy Ghost make God’s presence and power known to human thought and more tangibly manifest. Christ is the Truth that Jesus embodied and expressed. Though Jesus long ago ascended, the Christ is still here, revealing to our waiting, receptive thought the nature of God and His harmonious spiritual creation. The Holy Ghost is divine Science, the laws of God that operate to fulfill in humanity’s collective experience the reality that Truth is always revealing to human consciousness.

Christ, Truth, and divine Science leaven human consciousness. They inspire, purify, and comfort. And in so doing, they bring profound changes to the nature of human consciousness and character. Human thoughts become more spiritual, more Christly, less materialistic, while fear, hatred, selfishness, and self-will diminish. Individuals begin to know the loving control that divine Love holds over all creation, because their own characters reflect more spiritual love.

As Mrs. Eddy’s piece in The Boston Globe brings out, the purification of collective human consciousness will bring greater peace to the physical atmosphere. It can also help open up wiser ways for humanity to care for earth’s atmosphere and environment. But progress in this direction doesn’t just happen.

Progress comes through consecrated prayer to understand the true nature of man and the universe as the infinite idea, or expression, of Spirit, Mind. Progress also requires cleansing our thinking of self in its various manifestations. To the degree that the light of spiritual understanding and love shines in our thoughts, the purifying influence of the Christ and Holy Ghost transforms us and is also felt far beyond us. The divine influence is infinite and finds access wherever there is a receptive heart.

Even as we work for long-term progress, consecrated prayer can be applied to more immediate threats of destructive weather. Mrs. Eddy often instructed her household workers and others to pray for harmonious weather, and she expected practical results. It’s also recorded that she was able to quickly dispel violent, threatening storms through her understanding of divine Love’s supreme, loving control over all (see, for example, Mary Baker Eddy: Christian Healer, Amplified Edition, pp. 260–261, 354–355).

In the years since then, others have prayed about the weather with healing results. (See, for example, “That ‘still small voice’ of God: Too small to speak to extreme weather?” Journal, September 2009.) In my own experience, I was grateful to witness the unexpected end to a prolonged, severe drought (see “No drought in Mind,” Christian Science Sentinel, August 25, 2014).

Cultivating day by day more of the spiritual consciousness that was so natural to Jesus, we contribute to healing in the world. And we increasingly find in our own experience evidence of the truth that all being is embraced in the harmony of Mind, the purity and balance of Soul, and the goodness of divine Love. 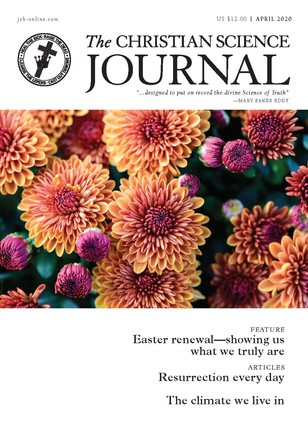 Our timely need for timeless Truth

Easter renewal—showing us what we truly are

Safety right where we are

The climate we live in

Out of the dream and into Truth

“Thy sins are forgiven thee”

Untouched, free from trauma after accident