Paul reminds us in Galatians 3:28 that we are all one in Christ, acknowledging the spiritual identity of man.

While driving to work and engaged in my usual practice of praying in preparation for my shift, I was startled at what I was receiving from divine Mind. Usually my prayers lead me to a sense of peace and an expanded capacity to extend compassion. But in this particular instance, my thoughts were those of a Christian soldier marching off to war, as if trouble was brewing. Certainly there could be no trouble in God’s kingdom, yet I felt a sense of being propelled to pray about protection. I remember wondering aloud, “What is going on?”

Shortly afterward, while responding to my first patient call of the evening, the patient called me the “n” word and told me to get out of her room.

I left quickly, mentally pleading for God to erase the awful incident from my consciousness. I was afraid forgiveness would be beyond my capacity, but instantly the thought came, “Take no offense.” I’d prayed from time to time with the concepts in an article called “Taking offense,” included in Mary Baker Eddy’s Miscellaneous Writings 1883–1896 (pp. 223–224), and I was grateful for the instant refreshment this nudge brought me in that disturbing moment.

Her words resonated! I had often lamented what seemed like a lack of diversity in the Christian Science community, so, upon receiving the practitioner’s helpful insight, I was awakened by the thought, “Good try, devil, but it’s too late; I’m already ‘in love,’ ” meaning I was already ‘in love’ with practicing Christian Science; I was already deeply committed and devoted to its teachings and also knew that I lived in divine Love, where evil has no power or influence over me.

Gratefully, I was beyond being persuaded by tempting thoughts such as: “Christian Scientists are just as prejudiced as anybody else!” And, “Why align yourself with these people?” I put those suggestions aside because my overarching thought in the midst of this incident was, “Christian Science is the truth, and I will stick with it, trusting Father-Mother God to heal this imposition on humanity.”

It was instructive to me how on this occasion the enemy, what the Apostle Paul calls the carnal mind (see Romans 8:7), or the impersonal mentality opposed to God, had tried to leverage a point of personal hurt, to dissuade me against the truth of harmony and unity among God’s creation. Thank goodness I was sufficiently able to cling to the angel thoughts coming to me from God and be guided higher.

We learn in Christian Science, “Identity is the reflection of Spirit, the reflection in multifarious forms of the living Principle, Love” (Mary Baker Eddy, Science and Health with Key to the Scriptures, p. 477). Therefore, identity is not truly racial, ethnic, or material. As mortal thought emerges into this light, my expectation is that Christianly scientific understanding will enable humanity to increasingly recognize each individual’s spiritual identity, which goes far beyond race, and that the truth will set us all free. Spiritual identity precludes any other “self.”

In a By-Law titled “A Rule for Motives and Acts” in the Manual of The Mother Church by Mrs. Eddy, we read, “In Science, divine Love alone governs man; and a Christian Scientist reflects the sweet amenities of Love, in rebuking sin, in true brotherliness, charitableness, and forgiveness” (p. 40).

Also, we find in the Christian Science textbook, Science and Health, on page 583, “The Church is that institution, which affords proof of its utility and is found elevating the race, rousing the dormant understanding from material beliefs to the apprehension of spiritual ideas and the demonstration of divine Science, thereby casting out devils, or error, and healing the sick.” These are powerful spiritual concepts that we all may use to pray about the unity of God’s children.

The incident described above is not the only racially associated encounter that I experienced while serving in the role of Christian Science nurse. But God’s grace often provided a bridge, a heartfelt connection between the patients and me, and I witnessed many healings and transformations of thought during these times. Soul guided my conversations throughout these encounters, and each one came with its own blessing.

Today, regrettably, the “serpent” of latent racism (much like the lying, subtle, allegorical snake in Genesis 3) does sometimes operate in people’s thought unawares. The world aggressively tempts us to accept racism as inevitable and as a governing power, but we need not be discouraged, or accept this verdict, since Christian Science reveals it as no more than another fleshly belief. And we can and should work to heal it. Mrs. Eddy’s counsel in Miscellaneous Writings puts it this way: “May divine Love so permeate the affections of all those who have named the name of Christ in its fullest sense, that no counteracting influence can hinder their growth or taint their examples” (p. 223).

The Christ can heal this tenacious imposition. The scientific remedy is spiritual action that handles the lie of mortal existence and replaces it with the truth of spiritual identity. Father-Mother God is calling us to be minutemen, to be Christian soldiers, and to prayerfully handle racism with Truth. Referring to how we should follow Jesus, Science and Health states, “If all who seek his commemoration through material symbols will take up the cross, heal the sick, cast out evils, and preach Christ, or Truth, to the poor,—the receptive thought,—they will bring in the millennium” (p. 34). Our consistent united prayers are needed on this subject.

Here are some things we can all do:

The news today signals change and is full of the sometimes tumultuous exposure of error. But having the hidden serpent revealed is not sufficient, nor are social and civil rights movements up to the task of completely destroying this evil. But the lie of mortal identity can be faced and systematically eliminated through the diligent work of practicing Christian Scientists who are embracing their own spiritual identity and demonstrating Truth in this age.

Mrs. Eddy’s poem “The New Century” encourages us to focus thought scientifically. It states, in the last stanza:

’Tis writ on earth, on leaf and flower:
Love hath one race, one realm, one power.
Dear God! how great, how good Thou art
To heal humanity’s sore heart;
To probe the wound, then pour the balm—
A life perfected, strong and calm.
The dark domain of pain and sin
Surrenders—Love doth enter in,
And peace is won, and lost is vice:
Right reigns, and blood was not its price.

Let’s make the commitment as healers to address this important subject together. The world can’t help but feel the effect of our individual and collective prayers. 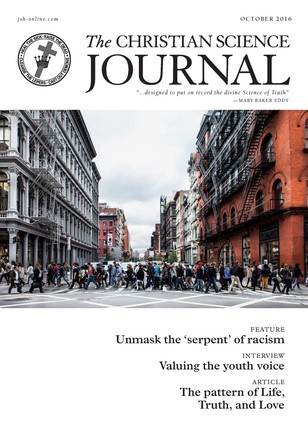