A PHYSICAL scientist has stated that the human eye perceives but one forty-thousand-millionth part of the material universe. How inadequate, then, is this physical organ as a medium for reliable information! By far the greater part of what is taking place in the temporary so-called material universe the eye never sees; and it takes no note at all of the permanent spiritual universe of divine Mind. Says Paul, "Eye hath not seen, nor ear heard . . . the things which God hath prepared for them that love him." Where, then, is that perceptive capacity to be found that acquaints us with God and His work?

Christian Science turns back the testimony of matter, denying that either man himself or the senses of the true man are in matter, and affirming that the true man and his senses are the expression of eternal Mind and endowed with the permanency of divine Mind. The important fact is often overlooked that there must be Mind in order to have sensibility. "Mind alone possesses all faculties, perception, and comprehension," writes Mrs. Eddy in the Christian Science textbook,"Science and Health with Key to the Scriptures" (p. 488). Without Mind there can be no perceptive sense. Perceiving is a mode of Mind's activity.

In the divine order there can no more be impaired sight than there can be impaired Mind, a depleted intelligence, or a blinded God. True perception can no more be impaired than God's activity can be interrupted, or the perpetual omniaction of Mind can be abrogated or lessened. If one idea could lose its perceptive faculties, or have them impaired, such result would evidence a power greater than the all-seeing Mind. God would no longer be all-seeing. Loss of perception would isolate the idea from those relationships and associations which characterize the divinely coordinated unity of Mind's ideas, and the perpetual indivisibility of God and His universe.

The perceptive faculties afford the ability to discern the identity of each and all of Mind's ideas. Impairment of these faculties, if such were possible, would disrupt the unity and intelligent association of God's ideas in one universal family. In the eternal continuity of perceptive activity, expressed by God's ideas, is evidenced the omniaction of the all-seeing Mind.

What argues against these conclusions? Material thoughts and physical sensation. How much credence is to be accorded such testimony? None. Why? Because it is a denial of the divinely intelligent standard of life and manhood, and is therefore a negation, a lie.

The lie asserts there is another mind, the opposite of God, good. It claims that this mind evolves matter and resides in matter. It admits that there must be mind in order to have sensibility, but it says: I am mind, and I am in matter. Therefore, it argues, sensibility is in matter; sight and hearing are material. Where is the fallacy? Just here: that mortal mind is devoid of intelligence, the essential quality of Mind; hence it is never Mind. To call it mind is a contradiction in language, as Mrs. Eddy states in her textbook (p. 114). Mind is never mortal. Because it is never Mind, so-called mortal mind never has sensibility. Never having sensibility, it cannot endow a mindless, substanceless organism with faculties which it does not possess.

What seems to be impaired vision is a changing deflection of error's lie that mind and sensibility are in organic matter. Difficulties arise when we believe we are what mortal mind says we are,—its very own, created and conditioned by and dependent on matter and material sense,—instead of realizing that we are what God, divine Mind, knows we are, even His eternal, unimpaired and unimpairable idea, seeing as He gives us to see, not by or through matter, but in spite of it. Our conscious associations with one another and with creation are forever preserved to us by reason of God's ability to sustain Himself and His own all-seeing ability. All the being we have, including our seeing, is in Him and is His. The infinite One's eternal consciousness of His infinite selfhood includes the perceptive faculties of every idea.

The belief, then, in impaired vision, which sometimes inflates itself into a popular contagion, is due primarily to the misconception that mind is in matter, and that perception is therefore in matter and suffers destruction or impairment, which are the conditions always consequent to mortal thinking. When it is understood that Mind is not in matter, it becomes apparent that sensibility cannot be there. The lie of defective sight must then disappear, for there is nothing to support it.

Though mortal mind, hiding behind its effect, claims that the eye sees, Science shows that it does not. So-called mortal mind alone believes it sees material things, even as it alone believes it cognizes mortal thoughts. When mortal mind abandons the body of its making, the eye does not see, though its organic structure is unchanged. As true perception is gained, the temporary objects—mortal thoughts, the objects of material sensibility—gradually give place to the permanent ideas of Mind, which afford evidence and proof that God is.

When mortal mind finds an auditor for its plea of impaired sight, it presses its lie with persistent aggressiveness. Perception is constantly needed to maintain contact with men, books, and things. Under the guise of necessity, corporeal sense would try to force concession, retrogression, and a prolongation of its claim that matter first gives sight, then takes it away, and then demands material appendages in order for man to continue to see. Sometimes it would bolster its arguments by comparison. It reminds us that a friend, perhaps a practitioner, is wearing glasses. For us to do so would not be so bad, it whispers! Thus it plies its deceitful way. Personal comparison is more likely to leave one at the unavailing shrine of human personality than to advance one Godward. Man's one obligation is to be man—to represent, which means to express, the all-seeing Mind. What mortals do, or do not seem to do, cannot change what man must do. If the use of temporary means to aid human vision seems to some the lesser of two evils for the moment, let it be remembered that such means can be only temporary. The individual should never be content until such means have given way to that perfect perception bestowed of God. To give the lie of impaired perception a continuing place in one's mental home is to shelter a denial of God's nature.

True perception is gained as we gain the Mind of Christ, the divine consciousness which knows that God is All-in-all. Because he possessed this spiritual-mindedness in some measure, Jacob was able to perceive the angels, ideas of God, in their harmonious heavenly activity. It was this consciousness which enabled Daniel and John to discern the apocalyptic visions, so indicative of the substantiality of things unseen by physical sense. The transfiguration showed the ability of true perception to see beyond the clouds of earth-sense and find conscious association with Moses and Elias, despite many centuries of time, thus evidencing the indivisibility of God's family.

Not good eyes, but good thoughts, are the medium of true perception. The former result if the latter are entertained. Since perception is a faculty of, and is inherent in, divine Mind, we are conscious of it only in the degree we are at-one with the divine Mind. We are consciously at-one with the divine Mind only as our thoughts are that Mind's thoughts. Consciousness must become consciously Godlike, must express love, goodness, unselfishness, purity, honesty, spirituality. While criticism, condemnation, hatred, dishonesty, selfishness, sin, fear, abide in thought, how can divine perception be known? No one of these is seen of God, and it is His seeing that is expressed by man. Three times our beloved Leader questions us in the opening lines of the Communion Hymn (Poems, p. 75). Each question has to do with perception:

"Saw ye my Saviour? Heard ye the glad
sound?
Felt ye the power of the Word?"

The three succeeding lines point the way which, if followed, will enable us to answer aright.

"'Twas the Truth that made us free,
And was found by you and me
In the life and the love of our Lord."

This article is included in:
1938 - PAMPHLET 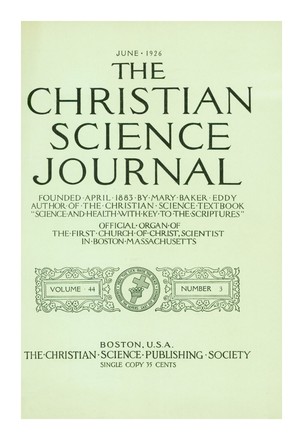 "LORD, TEACH US TO PRAY"

THE KINGDOM OF HEAVEN

OUR IDENTIFICATION WITH REALITY

LAYING DOWN OUR LIVES FOR OTHERS

THROUGH FREEDOM TO PERFECTION

ON MINDING ONE'S OWN BUSINESS

By The Christian Science Board of Directors | June 1926