To him who understands something of the nature of God, it is clear that God never made a conspiracy. The divine Mind plans no evil for man or the universe. Man, the likeness of God, has no conspiring element in his consciousness, for he is the expression of perfect Mind. In the realm of true being, all intent and purpose is for the production of universal good. All of God's children, dwelling in divine Love, express only good will one to another.

And yet the world seems full of conspiracies. Why is this? Because the world, as we commonly use that term, is made up of the general belief of life in matter. From this general belief come the many complex and inconsistent claims of evil minds and motives, counterfeiting the divine Mind and its infinite expression. So we have come to recognize that conspiracy is simply the combination of so-called evil minds, usually secretive, for evil or unlawful ends. One of the deceptive elements of this belief is the notion that a few mortals can conspire to cheat others in order to profit themselves. This is sometimes seen in the business world, where sharp dealing may profit one as a producer only to rob him as a consumer.

Mary Baker Eddy indicates the answer to this problem in a statement found in her Message to The Mother Church for 1902 (p. 4): "Competition in commerce, deceit in councils, dishonor in nations, dishonesty in trusts, begin with 'Who shall be greatest?'" Human selfishness and greed, aided and abetted by fear and ignorance of God, universal good, underlie all conspiracy. Under divine law conspiracy is neither justifiable nor possible. One's proper relationship to his brother is simply and reasonably expressed in the Golden Rule, "All things whatsoever ye would that men should do to you, do ye even so to them" (Matt. 7:12). This significant statement of Christ Jesus' is the practical correlative of that spiritual law of divine Love which decrees eternal spiritual unity between God's ideas.

Christian Science takes a positive stand on the Golden Rule. It assures us not only that we cannot prosper through conspiracy, but that we cannot become its victims. This may appear contrary to the world's way of thinking, for many people regard the Golden Rule as too impractical for the ways of men. Since error has within itself only the elements of negation, however, it lacks the power to accomplish anything but its own ultimate self-nullification.

Few people understand the relation between dishonesty and the prevalence of sickness. Dishonesty is mental disease, which, if unchecked, accounts for many distressing discords. But the truth of perfect God and perfect man, as shown in Christian Science, corrects faith in conspiracy and its devastating effects. Scientifically applying Truth, we prove this for ourselves and in our relations with others.

Christian Science has come to the world through the inspired work of Mrs. Eddy to destroy the conspiracy of materialism. The revelation of man's oneness with God as idea uncovers the entire claim of conspiratory philosophy. The belief in God's man as being evolved through geologic ages of materialism and animality from brute instinct is a fiction. The belief that man lives in a world inhabited by animate creatures whose very existence depends upon conspiring against the lives of other creatures less strong is a fiction. The belief that men must conspire against their fellow men for their own safety and well-being is a fiction. Ignorance and malice underlie these errors.

The law of divine Love, revealing the inherent goodness and harmony of every expression of Life, God, denies these false theories and will ultimately be seen as the truth of all being. The Christian Scientist rejoices in the basic justice and mercy which proceed from divine Truth and Love. God imparts to one and all of His ideas love, goodness, and beneficence. Man's true identity radiates only good will to every other idea in creation. The destiny of the entire universe is under the benign power of infinite good.

To understand the law of divine Love annuls the belief of conspiracy. To rise spiritually against every temptation to believe in conspiracy lifts thought into the realm of harmony, where protection from conspiracy is available according to our present need. This is illustrated in Mrs. Eddy's superb statements in "Science and Health with Key to the Scriptures" (p. 514): "Understanding the control which Love held over all, Daniel felt safe in the lions' den, and Paul proved the viper to be harmless. All of God's creatures, moving in the harmony of Science, are harmless, useful, indestructible."

Looking to the life of the master Christian, we find that Jesus conspired against no one. Although his ministry was one of courageous conflict with all evil, he hated no one. If his persecutors had only known it, the Master's mission contained blessing for them as well as for humanity at large. Similarly, the great lifework of Mrs. Eddy was inspired by universal divine Love. No conspiracy there, for the whole intent of her ministry was to reveal the healing truth, whose God-directed purpose is the uncovering and destruction of all evil conspiracy, or animal magnetism.

And so it is our task, as her followers, to face today's conspiracies with fearlessness and in the sanctuary of individual communion with Truth and Love to handle and so disperse the subtle plottings of mortal mind decisively and thoroughly. It is our opportunity to know that, under the control of perfect Mind, man has no desire for and no consciousness of machination. Good alone is the motive power of the universe of God. Divine Love is supreme, and its government will be established on earth. 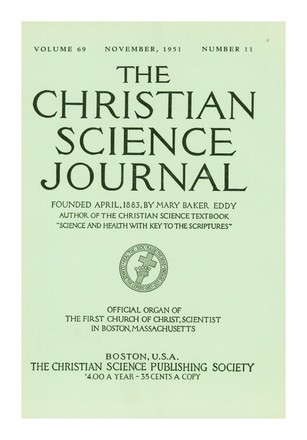 "THE PERFUME OF GRATITUDE"

SHALL I PRACTICE CHRISTIAN SCIENCE?

OUR THREE ASPECTS OF HOME

TRIUMPHS IN THE WILDERNESS

AN APPRECIATION OF THE TEXTBOOK

OVERCOMING THE BELIEF IN CONSPIRACY