When I was about to start graduate school many years ago, I got a notice from the school informing me that I needed to take a physical examination as part of the admission requirements. When I explained to the admission office that I was a Christian Scientist and therefore would like to be given an exemption, they told me that I still needed to take a tuberculosis test. I went to a local hospital and took a TB skin test shot. Several days later, a doctor told me that I had positive symptoms of TB. Unless this was cared for, she said, I would not be allowed to start school.

When I heard the outcome of the test, I simply refused to consent to this verdict. I told the doctor that I was a Christian Scientist. And because through my practice of this Science I was identifying myself as God’s perfect spiritual idea, I also said that I felt this test result was mistaken. Then the doctor made some remarks that expressed antipathy toward Christian Science.

I was tempted to react to her comments but decided to be very quiet. In order to prove that I did not really have TB, I was asked to have another TB skin test shot or an X-ray. This time I chose the latter. But the same doctor told me that I was wasting her valuable time because the ensuing test would show that I indeed had TB that needed immediate medical treatment.

I had just thirty minutes before the X-ray test. During this time I went outside the hospital and decided to pray for myself. I was very concerned about the prospect of not being able to go back to school because of this medical issue. But instead of worrying about “what ifs,” I determined to know more deeply what was spiritually true about my identity.

I kept saying to myself, because I knew it was the truth, “I do not have this disease.” I wasn’t ignoring the issue but was standing firm for the allness and goodness of God and the perfection of what He created. I was comforted by the following sentence from Science and Health with Key to the Scriptures by Mary Baker Eddy: “Insist vehemently on the great fact which covers the whole ground, that God, Spirit, is all, and that there is none beside Him. There is no disease” (p. 421).

I felt that I needed to seek further help, so I called a Christian Science practitioner from a public telephone booth nearby. I briefly explained my situation to her and told her that I had less than thirty minutes before the X-ray.

She was glad to help, and then she read to me the following sentence from Science and Health: “Tumors, ulcers, tubercles, inflammation, pain, deformed joints, are waking dream-shadows, dark images of mortal thought, which flee before the light of Truth” (p. 418). The practitioner told me that “dark images of mortal thought” are not the truth about God’s reflection. She expected that an X-ray could only confirm that I didn’t have TB, because the fact is that my true identity is God’s perfect child, who is not subject to sin, sickness, and mortality.

She asked me to confidently leave the outcome to God, and then she read this sentence from Science and Health: “Your true course is to destroy the foe, and leave the field to God, Life, Truth, and Love, remembering that God and His ideas alone are real and harmonious” (p. 419). Also, she mentioned this Bible verse from Isaiah, which was very helpful: “Thou wilt keep him in perfect peace, whose mind is stayed on thee” (26:3).

I’ve found an analogy helpful in the healing of physical troubles. In a movie theater, when a certain image is projected upon the screen, all we are seeing is an image, but the image is not a part of the screen. When you turn off the projector, the screen remains white.

I like to think of our pure, spiritual identity as the white screen. It’s unaffected by dark images of sin or sickness. No false image can change or efface our pure, perfect identity. No such image exists in God, the divine Mind, or in God’s pure reflection, man. So the need is to dispel, through the power of Truth, any dark, ungodlike images of thought that would claim to be a part of our consciousness and to hide our God-given well-being.

These ideas were helpful as I prayed before taking the X-ray test. Several days later, when the test result came back, that same doctor was puzzled, since she could not find any traces of TB. Reluctantly she gave me a clean bill of health, which enabled me to start in graduate school without delay.

Later in my career I was required to take more physical examinations because of the mandatory requirements from the government and various employers I worked for. Even though I went through more tests, which also included a TB test, I passed all of them with flying colors.

As the Bible’s book of Genesis assures us, “God saw every thing that he had made, and, behold, it was very good” (1:31). This is how God sees every one of us, and how He made us, as Christ Jesus proved through his healing works.

I am so grateful for this healing and many others that I’ve experienced through Christian Science. Words cannot fully express my deep gratitude to Mrs. Eddy, who made enormous sacrifices in her life to share this timeless spiritual truth with mankind. 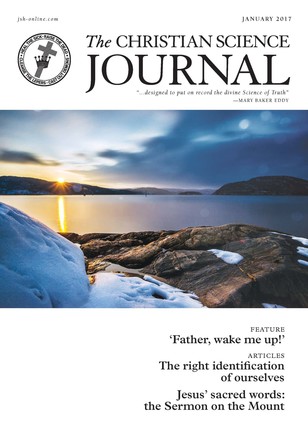