The opening pages of the Bible, the 31 verses in the first chapter of Genesis, are special to people around the world. But while many view them as the record of a creation that took place in the past, Christian Science reveals that it is a timeless description of creation as it always truly is, spiritual and perfect.

Consequently, I have often thought that within these pages lies the answer to every conceivable phase of human suffering and misery—God’s spiritual creation, where every need of man has already been met; where health, harmony, infinite provision, safety, order, and unity are established facts; where nothing is subject to chance or change, nothing is left undone, and nothing needs to be improved.

This record of creation reveals God’s spiritual universe, including God’s children made in His image and likeness, as forever complete. A single verse at the end of the chapter captures the scene brilliantly: “God saw every thing that he had made, and, behold, it was very good” (verse 31).

And yet, a natural question to ask is, What about when things don’t seem “very good”? What happens when our life or the world around us seems thrown into crisis? What if our health, safety, or stability are being threatened in some way?

These tough moments are actually when an understanding of the first chapter of Genesis can do us the most good. That is to say that this extraordinary chapter provides more than mere words and lovely imagery; the truth it reveals is practical and demonstrable.

Let me offer an example. A number of years ago I was invited to be a groomsman in a friend’s wedding. As the big day got closer, everything seemed to be going according to plan, with one notable exception: The wedding was out of the country, in a city that was fighting an outbreak of a contagious illness, a coronavirus considered by medical experts to be potentially deadly. All the planning and complicated wedding logistics had been firmly committed to in that city long before the outbreak began, and with the wedding date fast approaching, the location could not be changed.

I certainly did not want to let my friend down on his big day, but it was wise to make sure I was being law-abiding by following any legal requirements that my own government might have put in place. I found out there was no travel ban or quarantine, only a strong recommendation that people coming back into the United States from this particular city stay home for a week if they were able. My employer accommodated my request for a little time off from work in order to comply with that.

I had a wonderful time at the wedding, and returned home to enjoy a quiet week away from work. However, just two days before my return to work, I became very ill with aggressive flu-like symptoms consistent with that particular coronavirus. I knew right away that I needed to pray, to reach out to God to understand and feel more of His saving power and presence.

As a devout student of the Bible, Mary Baker Eddy, the Discoverer and Founder of Christian Science, spent a great deal of time studying and writing about the first chapter of Genesis. More than just write about it, however, she repeatedly demonstrated that a deeper understanding of God’s spiritual creation can have a profound healing effect. Her own remarkable record of healing proved as much, and she helped many others to see that they, too, could heal through spiritual means, empowered by a right understanding of God and His creation.

In Mrs. Eddy’s primary text on Christian Science, Science and Health with Key to the Scriptures, she states, “Spiritual understanding, by which human conception, material sense, is separated from Truth, is the firmament” (p. 505). And further down the page she goes on to say: “Spiritual sense is the discernment of spiritual good. Understanding is the line of demarcation between the real and unreal.”

A deeper understanding of God’s spiritual creation can have a profound healing effect.

Each of us has the capacity to discern important facts about our true identity as God’s spiritual creation. We have a God-given spiritual sense with which to distinguish between the real and unreal. This capacity becomes especially important when we learn that the real, spiritual facts of God’s creation are completely at odds with the information that the material world presents, information from the physical senses.

Christ Jesus proved beyond all doubt what a right understanding of God’s creation can do, when he healed all manner of disease and suffering during his ministry, including conditions thought to be highly contagious such as leprosy. Moreover, Jesus promised his followers that they, too, could heal through spiritual understanding. He said, “Ye shall know the truth, and the truth shall make you free” (John 8:32).

The implication of the Master’s statement is that a knowledge of the truth about God’s creation can bring complete freedom. Freedom from what? From fear and panic, from sin and sensuality, from disease and suffering. Why? Because in God’s eyes, those things aren’t real. You won’t find them anywhere in God’s spiritual creation described in the first chapter of Genesis; and without the authority of omnipotent Mind to back them, these so-called destructive elements are without any reality or power. The understanding of God’s creation reveals these truths, and as we let them become conscious realities to us, they in turn make us free.

Isn’t that always the fundamental effect of truth? Truth corrects any misstatement of the facts, and frees one from the bondage imposed by believing in a falsehood.

So what does the reality of God’s spiritual creation look like? The Apostle James offers this insight: “Every good gift and every perfect gift is from above, and cometh down from the Father of lights, with whom is no variableness, neither shadow of turning. Of his own will begat he us with the word of truth, that we should be a kind of firstfruits of his creatures” (James 1:17, 18).

The truth, then, is that God’s creation is from above—above matter-based concepts—and it is spiritual, good, and perfect. The truth is that there is no uncertainty, no chance, no lack of safety in God’s creation. Man is created by God’s Word and is not material or sensual in nature, but being from above, man is actually spiritual. As Jesus himself said, “That which is born of the Spirit is spirit” (John 3:6).

So it was that I found myself praying with these ideas as I was confronted with intense flu-like symptoms. I stayed home as was requested by the authorities following exposure to the virus, but I knew this condition of suffering was not legitimate. Nowhere in all of God’s creation outlined in the first chapter of Genesis does God ever sanction, allow, or even conceive of disease. It’s simply not there. Reasoning along these lines, I could begin to see that my real, spiritual being could not be contaminated or infected by a mortal concept. If no such concept was known to God, it could not be known or held by God’s child.

I began to see that there was an impenetrable wall of defense in place—the firmament. The spiritual understanding of God that was unfolding in my consciousness left no room for material sense testimony to present a muddled, matter-based view of my identity.

While my healing wasn’t immediate, the progress was steady, and within a few days I was completely well. The symptoms were gone, and I was able to go back to work.

It’s our understanding of spiritual facts that provides safety and protection in times of contagion, a powerful insulation and inoculation against the ugly but illusive conditions of false material sense. Such ugliness is unknown to God, and ultimately cannot be known by or manifested in His children. Anything that is opposed to God’s goodness—disease, violence, injustice of any kind—cannot, and does not, exist in the spiritual realm of God’s creation, including the fortified spiritual understanding that appears in the unfolding of the second day of creation.

This firmament of spiritual understanding is revealed through Christ—the power of God Christ Jesus represented and proved in human experience. The activity of the Christ reveals the truth that makes us free. And it brings the understanding that life in God is always perfect, harmonious, and safe. As First John 5:20 declares, “We know that the Son of God is come, and hath given us an understanding, that we may know him that is true, and we are in him that is true, even in his Son Jesus Christ. This is the true God, and eternal life.” 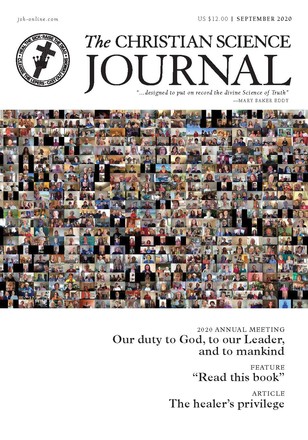 Our duty to God, to our Leader, and to mankind

The spiritual understanding that keeps us safe

No power can undermine Truth

From inspiration to publication

What does it mean that we are children of God?

Contagious illness—stopped in its tracks

The “unbroken continuity of good” after a fall

A foundation for my whole life

Undisturbed after a break-in

From The Trustees under the will of Mary Baker Eddy

Our changeless source of health