The biblical story of Nehemiah rebuilding the wall of Jerusalem is a useful case history for anyone wishing to better understand the Christly way to deal with evil suggestions—with whatever would abort, hinder, divert, discourage, or defeat any good work.

When Nehemiah first heard about the broken walls and burned gates of Jerusalem, he was deeply distressed and prayed for God's guidance. As the idea for rebuilding the structure began to form, opposition to this endeavor quickly surfaced among the enemies of the Jews—Sanballat and Tobiah—for "it grieved them exceedingly that there was come a man [Nehemiah] to seek the welfare of the children of Israel." Neh. 2:10. This is a typical response of evil—to be made distraught by the pure light of a good example and a God-directed work.

By night, and unknown to the opposition, Nehemiah carefully inspected the area. From the outset, he wisely hid his intentions and did not reveal his plans to the rulers, priests, or workers. Just so today, every righteous endeavor, every constructive work, must rest on the sure foundation of quiet reliance on God alone.

When the decision to rebuild the wall was made public, one of his opponents' early ploys was to laugh at and scorn Nehemiah's efforts. Taunting, they said: "What is this thing that ye do? will ye rebel against the king?" His response was, "The God of heaven, he will prosper us; therefore we his servants will arise and build: but ye have no portion, nor right, nor memorial, in Jerusalem." vv. 19, 20 .

One day, while I was reading this verse, Nehemiah's choice of the three words "portion," "right," and "memorial" seized my attention. I looked up their synonyms for an increased comprehension of their meaning. These synonyms, along with an influx of spiritual insights, revealed an expansive view of treatment in Christian Science practice.

Suddenly I could see that evil had no portion, percentage, or share in my career. Evil had no right, jurisdiction, permission, or warrant to intimidate me; nor could it hinder my spiritual progress. Evil had no memorial—no reminder or record to call itself to my attention as something that had ever dogged my steps, resulted in my history, influenced my attitudes, or caused me distress. Therefore, it could not appear as a scar (memorial) of an accident or as an emotional scar of hurt feeling. Evil could not memorialize itself in my consciousness even as a memory of someone's glance reminding me of an unpleasant incident.

Again, evil had no share of my experience to limit my strength, curb my spiritual insights, restrict my joy, deprive me of my full heritage of good from God. Evil had no warrant to threaten me with fatigue, no right to dominate my thoughts, no authority to suddenly appear as an inevitable obstacle on the pathway I was led by God to pursue.

Thus, one could declare on the basis of Nehemiah's words: There cannot remain, even in memory, a trace of evidence that evil ever had any affinity for or connection with God's spiritual man. This broad-based realization extends to one's career, body, family, church; to one's relationships with his fellow humans and with his universe.

We see in the Bible account that Nehemiah continually had to rebut evil suggestions in order to complete his project. His adversaries said of those building the wall, "They shall not know, neither see, till we come in the midst among them, and slay them, and cause the work to cease." 4:11 . Here is represented the threatening attitude of evil that would victimize us or hold us hostage to its claims. Nehemiah's actions exhibit both watching and praying. This mental alertness is coupled with diligence in pursuit of the work at hand. No secret, ensnaring intention to do evil can hide from all-knowing Truth, because Truth's nature exposes the impossibility of opposite claims.

Only if one is ignorant of the deceptive nature of evil and does not understand the all-power of God can he feel thwarted or frustrated by intrusive erroneous suggestions whispered to his thought. The key to victory over evil is found in these words of Mary Baker Eddy, the Discoverer and Founder of Christian Science: "Only by admitting evil as a reality, and entering into a state of evil thoughts, can we in belief separate one man's interests from those of the whole human family, or thus attempt to separate Life from God. This is the mistake that causes much that must be repented of and overcome." Miscellaneous Writings, p. 18.

A worker in her household recalled that Mrs. Eddy told her: "Whatever error you admit in yourself as real or in another, you make yourself liable to that error. Admitting error real produces error and is all there is to it." We Knew Mary Baker Eddy (Boston: The Christian Science Publishing Society, 1979), p. 202 .

So we are taught never to admit the reality of evil. We neither personify nor personalize evil, for we are not engaged in a mental game of "Pin the [Tale]" on someone! This consistent, upright position would effectually annihilate gossip, vilification, slander, meddlesomeness, and destructive criticism.

The insistent nature of evil is also represented in the Bible story. Sanballat and Geshem sought to do more mischief by requesting a meeting with Nehemiah in an outlying village. Nehemiah's wisdom enabled him to see this as an effort to disrupt the progress of the work. He refused such requests on four occasions—each time with an insightful rejection of the entreaty and a rededication to the God-directed endeavor. Four times they tried and four times he remained steadfast and faithful to his divine purpose, refusing to be sidetracked.

Nehemiah's swift, persistent rebuttals (based on prayer to God and on spiritual understanding) made him superior to every subterfuge and threat of evil that would have halted the work. He resisted at every point and was strengthened. Like Nehemiah, we too can unswervingly respond by affirming good and unhesitatingly rejecting every evil intimation, whether it comes as gossip, rumor, innuendo, false witness, or other intrigue.

The fifth time, an open letter was sent to Nehemiah by his enemies in an attempt to misrepresent or pervert his genuine purpose in rebuilding the wall and thereby cause him to be afraid. Their defamatory statements hinted that Nehemiah was working for self-glorification, that he was a rebel who wished to be king. To provide a smoke screen for its activities, evil charges others with its own base motives, thus seeking to draw attention elsewhere. These twisted statements were met with Nehemiah's prayer, "Now therefore, O God, strengthen my hands." Neh. 6:9 . Today, evil's repeated challenges require ever stronger commitment from workers dedicated to spiritual living.

The wall was successfully rebuilt. Nehemiah had shown that the work of God was not to be checked or thwarted, and that His faithful servants could not be intimidated.

In summary, we can see many methods of error exhibited in this story: ridicule, scorn, hatred, persistent intimidation, falsehood, rumor, slander, relentless desire to defeat the purpose of good. As we follow Nehemiah's example, we are assured that spiritual-mindedness prevents deception by any of error's subtle methods. The result of such alertness is the strengthening of God's servant and the certain defeat of evil.

We are effectual workers as we manifest Nehemiah-like qualities, always letting God direct our careers. Only then can we safely advance and flourish. Mrs. Eddy, author of the Christian Science textbook, Science and Health with Key to the Scriptures, writes, "Eternal harmony, perpetuity, and perfection, constitute the phenomena of being, governed by the immutable and eternal laws of God; whereas matter and human will, intellect, desire, and fear, are not the creators, controllers, nor destroyers of life or its harmonies." No and Yes, pp. 10–11. 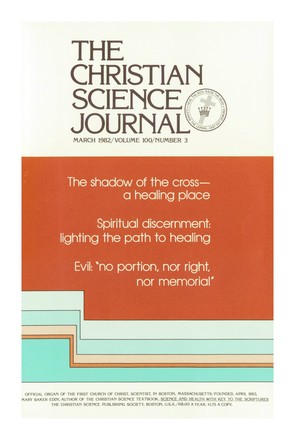 Evil: "no portion, nor right, nor memorial"

It's where you play the game

Why had all the flowers gone?

The continual demand to deny matter

Writing for the periodicals: a family affair

The shadow of the cross—a healing place

Recently, I had occasion to climb to...