I live in a region of New York dubbed the “corridor of conscience” in the 19th century. Here, the women’s rights movement in the United States was born, anti-slavery sentiments blazed, and activists such as Elizabeth Cady Stanton, Susan B. Anthony, and Harriet Tubman lived and worked.

Mary Baker Eddy, a contemporary of theirs in New England, announced in the Preface of the first edition (1875) of her trailblazing text, Science and Health: “The time for thinkers has come; and the time for revolutions, ecclesiastic and social, must come. Truth, independent of doctrines or time-honored systems, stands at the threshold of history” (p. 3).

While others focused on social and political rights, Eddy labored for humanity to know and exercise our spiritual rights and freedoms. Months after the American Civil War ended, she glimpsed in the pages of the Bible a liberating spiritual message that had long been obscured by religious doctrines and dogmas. Her discovery—which she ultimately called Christian Science—not only transformed her health but lit the path of her lifework as a healer, teacher, author, and religious reformer.

In the pages of Eddy’s book, which she revised greatly over the years and renamed Science and Health with Key to the Scriptures, readers can feel the fire of her revolutionary ideas. Here’s one of those ideas:

“The voice of God in behalf of the African slave was still echoing in our land, when the voice of the herald of this new crusade sounded the keynote of universal freedom, asking a fuller acknowledgment of the rights of man as a Son of God, demanding that the fetters of sin, sickness, and death be stricken from the human mind and that its freedom be won, not through human warfare, not with bayonet and blood, but through Christ’s divine Science.…

Eddy’s understanding of the divine rights and freedoms she announced to the world flowed from her inspired, spiritual interpretation of the Bible, including the foundational truths established in the first chapter of Genesis: God as the only cause and creator, and creation as the reflection of God, Spirit, who is all good. In this light, all God’s children must be seen in the image and likeness of their one perfect creator—just as Christ Jesus saw them.

This universal message of freedom not only resonated with readers, but healed them. Many became healers themselves, and a movement emerged. Speaking extemporaneously to a crowd in Chicago in 1888, Eddy described a “revolutionary struggle” under way for “the freedom of health, holiness, and the attainment of heaven” (Miscellaneous Writings 1883–1896, p. 101).

At a Sunday service on the Fourth of July in 1886, Eddy praised the courage of America’s forefathers, who yearned to “establish a nation in true freedom.” She then asked: “But what of ourselves, and our times and obligations? Are we duly aware of our own great opportunities and responsibilities? Are we prepared to meet and improve them, to act up to the acme of divine energy wherewith we are armored?” (Miscellaneous Writings, p. 176).

Every time you pray about an illness from the standpoint of your purely spiritual identity, you’re rebelling against the unjust notion that health is vulnerable, dictated by your body. When you strive to love someone who seems unlovable, you’re protesting against the view of man as selfish and evil. When you refuse to indulge in things like drinking, casual sex, and pornography, you’re exercising your right to think spiritually and independently rather than giving in to self-gratification or going with the crowd.

And as you dare to think expansively about God, to plumb the Scriptures for their inspired meaning, you’re in step with the original spiritual revolutionaries.

The Bible is a record of these revolutionaries—spiritually-minded men and women who glimpsed the reality of God’s spiritual government. These patriarchs, shepherds, prophets, and disciples of the Old and New Testaments—and especially Galilee’s great healer, Christ Jesus—were freedom fighters. Through their actions they stood up for humanity’s right to know and be blessed by the one universal God and to recognize ourselves as brothers and sisters of one common Parent. They revealed moral and spiritual laws that foster self-government and peace. And they showed the value of committing ourselves wholeheartedly to one God, one all-powerful good, whose all-presence concedes no power to evil, disease, or death.

Have you ever thought of yourself as a spiritual revolutionary?

This spiritual revolution is very much alive today. It’s not “out there” somewhere but stirring deep within us. “The kingdom of God is within you,” Jesus taught (Luke 17:21). This kingdom is the very consciousness and supreme authority of God as Love and Spirit, overturning everything unlike itself, including hatred, anger, lust, and all the dis-ease of a fear-based mentality. This is the heart of real revolution.

As a college freshman, I was feeling so overwhelmed by the problems of the world that I took a semester off to read Science and Health from cover to cover. Those seven hundred pages lit a fire in me that has not gone out since. I began to see my life-purpose and the world around me differently. Fears and limitations fell away, and I found myself moving in unexpected directions that led to study, travel, and work across the globe and, ultimately, to devoting my life to spiritual healing.

This spiritual revolution is ongoing. And I am encouraged by signs that hearts and minds everywhere are still stirred by the Bible and by Eddy’s writings. I find these words in Science and Health just as riveting today as the day I first read them: “Spirituality lays open siege to materialism. On which side are we fighting?” (p. 216).

How do we let this spiritual siege begin to overturn the materialism in our own thoughts and lives? Open the Bible and let the inspiration of its prophets shake you out of complacency. Leave your nets (see Matthew 4:19, 20)—and even the internet—for a day and read the Gospels straight through for all their good news. Retrace St. John’s vision of the new heaven and new earth in the light of Science and Health’s chapter “The Apocalypse.” (No, this isn’t about the end of the world! Apocalypse comes from a Greek word meaning revelation. And revelation is the fuel of spiritual revolutions, which lead to human progress and salvation.)

Whether you’ve already been touched by the revelation of Christian Science or you’re just getting to know these ideas, a revolution of thought is under way. The spiritual revolutionary within you is awakening you. And the world will never look the same—or be the same—again! 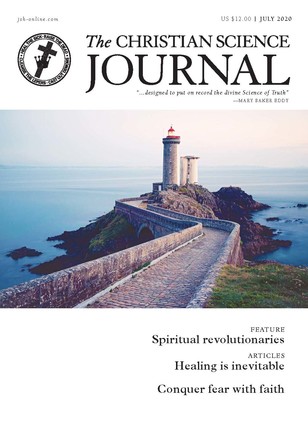