I want to share with you an experience I know about, where the concepts of understanding, forgiveness, grace, and love were deeply accepted, and healing followed. The proof of understanding is demonstration, and this is living Christian Science.

A woman I knew well had gone through many, many difficult years because of all the quarrels, misunderstanding, and tensions in the family. Also, her husband had a “short fuse” and would accept no contradiction. Very early one morning she stood in front of the open window of her bedroom, looking into the garden. She saw the slowly growing morning light. She heard the chirp and the rustle of birds between the leaves of trees.

She prayed with a deep desire for true peace, rest, and harmony for the whole family. For years, she had wrestled with these family concerns. Being a Christian Scientist, she knew that peace and harmony were not to be found in the mortal basis of belief.

Continuing in prayer, she said: “Father, show me what more I have to see and to understand, teach me to walk only in Thy way and to acknowledge Thee as the only Ego and Presence.”

After a time these words came to her thought: “Ye shall not see My face, except your brother be with you.”

“My brother?” she thought.”Who is the brother, that I do not have with me?” Slowly she began to understand that the “brother” in this case was her own husband.

This divine inspiration did not come from a so-called human consciousness or a material brain, but through spiritual intuition. She had been willing to receive the Christ, the “strongest deliverer” (Mary Baker Eddy, Poems, p. 75), through inspiration and spiritual sense. Science and Health with Key to the Scriptures states, “Through spiritual sense only, man comprehends and loves Deity” (Mary Baker Eddy, p. 481).

As the woman pondered this message and thought about its spiritual meaning, she realized that she could not “see God’s face”—could not understand God and experience the oneness, harmony, and wholeness of her true being—if she did not also see her husband as the son of God, undivided from the oneness of Truth and Love.

The Christ, manifesting Love, is always operative and effectively present without ending.

The one universal and only Mind knows only the one infinite idea as His reflection of Himself. Mind doesn’t see one good son and one bad son, one spiritual and the other material. As Mrs. Eddy put it in her Miscellaneous Writings 1883-1896, “God’s interpretation of Himself furnishes man with the only suitable or true idea of Him” (p. 258).

From this insight, the woman realized that she never again wanted to attribute to her husband, or any other individual, one quality or action that she would not ascribe to God, the Father of all.

She realized that the human mind’s concept of God or man is no basis for understanding God. Only God’s concept of Himself forms the true and spiritual man—God’s reflection.

This woman now saw more clearly that she had to mentally unloose her own sense of her husband from the hypnotic suggestions that he had a mind of his own, that he could think and act separate from God, that he had a difficult, dominating character. She realized that when she entertained a personal sense of man and existence, she could not see or feel the nothingness of error.

The spiritual reality is that man as the infinite and compound reflection, or son of God, could never fail to express the pure nature of his Father-Mother God, because man—meaning both men and women—is the child, or creation, of God. Divine Mind is the source of
every element of man’s true being.

The woman thought about Jacob’s spiritual struggle to overcome his belief in the wrong he had done to Esau, his brother, and his fear at the thought of meeting Esau after many years. During this wrestling time, Jacob had a deeper, spiritual insight. He said: “I have seen God face to face, and my life is preserved” (Genesis 32:30).

She understood that every temptation of so-called mortal mind lies in the belief that man has a mind apart from God. But God, who “cannot be tempted with evil, neither tempteth he any man” (James 1:13), is man’s only Mind. And since Mind is infinite, there is no place for a mortal or material mind.

The mental pain and fear were at last met that early morning through God, divine Truth and Love. The angelic message from Genesis helped the woman to free herself from personal sense with its false beliefs in many opposing minds. She understood that false beliefs had no power to hinder her recognition of the Christ-man, as expressing the fullness of God. She also understood that this truth could never change or end, because God does not change or end. He is always perfect Love.

Through this inspired thought, she experienced a higher and unspeakable peace, and an unshakable understanding of God’s perfect spiritual man. She felt the holy and healing peace that comes forth from an all-embracing and all-encircling divine Love. Nothing and no one is ever excluded from Love. The Christ, manifesting Love, is always operative and effectively present without ending. This realization of the never-ending Christ that expresses the fullness of Love brought more understanding, light, rest, and peace to the woman’s home. And she could say, “ ‘There remaineth therefore a rest to the people of God’ (of Spirit)” (Science and Health, p. 288).

If we want to see the true and only man, we have to start with God—to see God face to face as the only cause and source. Then we bring into this understanding the brother that must be with us—our fellow man and woman—and we can also say, “I have seen thy face, as though I had seen the face of God, and thou wast pleased with me” (Genesis 33:10). Infinite good, God, expresses Himself in an infinite variety of forms, but these forms can only point toward and testify to the one God, the source of all Life. Only in knowing God can we find the true man. 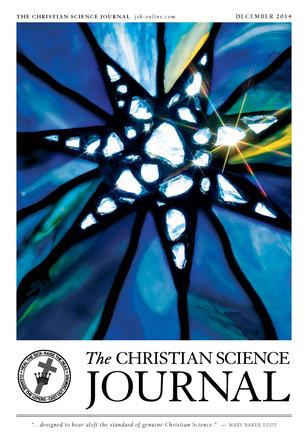 Your life — ‘hid with Christ’

Making the effort to pray

‘Remember the sabbath day, to keep it holy’

A thank you to a Sunday School teacher

Recollection of my earliest healing

Out of a bad drug trip to spiritual freedom