When something really good happens, often someone will say, “That was a miracle!” Such a statement suggests that the good expressed is unexpected, that the universe is governed by laws of nature that have conflict and limitation built in. That the universe can be a scary place. Perhaps even a hopeless place.

Christian Science presents a very different view of reality: a Bible-based, spiritual view. It shows that God, good, is the creator, and He governs all that He creates; man and the universe are governed by God’s unchangeable and consistently good spiritual laws. This means that there is never a need for miraculous intervention, because good is already the provable spiritual fact. Good is always divinely natural.

The authoritative Bible record in the first chapter of Genesis also makes spiritual reality clear. In it, God, Spirit, made all that was made, and man is made in God’s image and likeness. And when God’s creation was fully revealed, He declared that it was very good. Everything God creates is complete, having all that is required for perfection; and so everything He creates is rightly governed in function and action, and rightly sustained and maintained by Him. And because God’s laws govern, His creation is naturally and consistently good.

The very first commandment is “Thou shalt have no other gods before me” (Exodus 20:3). This powerful message disputes the very different creation story presented in the second chapter of Genesis. In that account the creator appears not to be in control of His creation, because shortly things go horribly wrong. There is an evil presence, and man is disobedient, cursed, and then separated from God. Man is then on his own, often missing something good. This man is left to make mistakes and is often in desperate need of something to save him.

But this story about man is simply untrue. It is inconsistent with the revelation that the one God, Spirit, is All, and that His creation is entirely spiritual and good, not material and limited. Knowing this, and trusting it, keeps us obedient to that First Commandment. It also frees us from fear.

Throughout the Bible record are accounts of people being delivered from lack, danger, disease, and death. These were people who loved, trusted, and worshiped God; and their deliverance came as they saw and trusted the harmony of His presence and power even when it appeared that some human law or a supposed law of nature was in control. They witnessed that there was a higher law, the law of God; and so safety, abundance, health, and life were revealed as the fact in their experience.

Jesus’ life of teaching and healing demonstrated that God’s law is the only law governing man and the universe. All that he said and did was consistent with the fact of God’s unerring government of creation, wherein all that is good is already in place.

Jesus knew God is our Father and that God’s love and care are predictable, dependable, and consistent. That fathering love was revealed in Christ Jesus’ works. There is nothing iffy about the law of Love. So Jesus expected the blind man to see, had faith that seven loaves and a few fishes would feed a multitude, and trusted that individuals who had died would be raised up. In each case, the perfection of God’s creation was made evident; the need was met.

There is never a need for miraculous intervention, because good is already the spiritual fact.

More recently, Mary Baker Eddy discovered the Science of God’s law and how it could be demonstrated in daily life. An account from the Daily Inter-Ocean included in Mrs. Eddy’s book Pulpit and Press reports her healing after a life-threatening accident. It said that she “suddenly became aware of a divine illumination and ministration” and was then well (p. 34). At first she thought that this was a miracle, but after extensive Bible study, she apprehended the spiritual meaning of Jesus’ teachings and healing. The account continues, “Mrs. Eddy came to perceive that Christ’s healing was not miraculous, but was simply a natural fulfilment of divine law—a law as operative in the world to-day as it was nineteen hundred years ago” (p. 35).

That’s the revelation of Christian Science—that God’s perfection is expressed in and as His perfect creation, with everything continuously under His law of provision and safety. Nothing missing, nothing going wrong and needing correction, nothing in danger. There’s just God and God’s goodness. And these spiritual facts, when understood, can be proved in our human experience in healing sickness and purifying human character.

I’d like to share a healing that showed me that, despite what is commonly accepted as law (that accidents are possible or that painful circumstances are part of life), it is God’s laws that govern.

While I was cooking once, hot grease splattered on my arm. I felt no pain, and there was absolutely no evidence of a burn. I was in awe at how I had been protected. Sometime later I burned myself again, but this time there was pain and discomfort. I didn’t understand how I could have been protected from pain in one instance and not protected later.

When I talked with a friend about this, she wondered if after the first case I’d thought of my protection as some kind of miracle. In other words, was I thinking that even though I’d broken some law of nature, I’d been miraculously protected? That would mean I had failed to recognize the constancy of God’s laws at work. Instead of seeing my protection as evidence of God’s law in action, I had still been accepting the possibility of being burned. I had much to think about after that conversation.

After a time I burned myself yet again. At that point it was instantly clear that I had a choice about what I accepted as the truth. Was I burned or not? I recall thinking, “Well, I will not be burned.” I had become more certain that God’s law of perfect government and care enfolds His creation. Spiritual facts override any so-called laws of nature. I knew this was true for me, as it is for all God’s children, because my real nature is spiritual and governed by God. This spiritual fact could be demonstrated right then, and it was. No sensation of pain or other evidence of a burn followed.

Healing is important in our lives—I’m so grateful for the comfort and freedom each healing brings, even the modest one I’ve shared here. But a healing experience is so much more than physical protection or improvement. Healing is seeing the power of God’s laws of good governing our lives, understanding that harmony, safety, and health are natural and permanent. So as we pray for healing, it’s important to know that we are in fact affirming and demonstrating spiritual reality, seeing that well-being and joy are natural to us as God’s ideas, and that this can be made apparent in human experience.

It’s helpful to think through the “take-away” from a healing—the spiritual facts that are made more evident to us because of the healing. My take-away from this healing? A greater clarity that healing is the natural result of understanding God’s laws of ongoing, consistent good, and that these laws can be demonstrated in our lives. 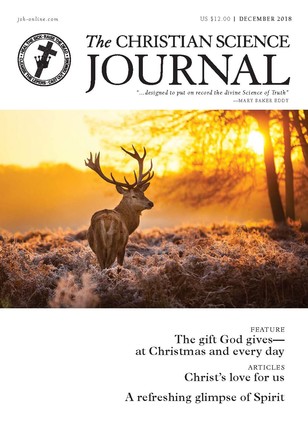 The gift God gives—at Christmas and every day

Christ’s love for us

Are you willing to be helped?

A refreshing glimpse of Spirit

The armor of prayer

When the babe was born

By Kristen Henley-Hills with contributions from Sam Hills | December 2018

From the Christian Science Board of Directors

By The Christian Science Board of Directors | December 2018

From the Trustees under the Will of Mary Baker Eddy

From the Christian Science Board of Directors | December 2018

‘The seeker of Truth will find it’ *