Two people attend an event where the word of Truth is spoken with inspiration and conviction. One person is deeply moved by what he hears. His life changes radically as the spiritual ideas fill his consciousness. He cannot speak for the peace and holiness that he feels.

The other person shrugs. "Well, that was really very beautiful, but of course I've heard it all before. Maybe it was the speaker's voice, or dress, or what I had for dinner, but I really don't think the message came across."

These two could have been listening to Christ Jesus on the shore of Lake Galilee. Or perhaps they had attended a Christian Science lecture in a stone and glass church. Both listeners could have been entirely new to scientific Christianity or they could have been longtime disciples of it. All, whether experienced disciples or newcomers, are invited to the fountain of truth, but one individual drinks deeply, while another may merely appreciate the sparkle of the water.

Why don't all drink? Thirst is the most obvious answer, and sometimes it seems that people try to get along with only the desire for "water"—for spiritual inspiration—that comes from their very first healing. However, one should never expect that the first aspect of truth one discerns will be enough for a lifetime, a year, or even a week. The fountain is eternal, and its waters invite all to come and drink daily.

One may become aware of a spiritual thirst through suffering of some sort or another. When pain increases, many people begin to search deeply for truth that is ultimately spiritual. Finally the searcher begins to doubt the apparent substantiality of matter sufficiently for truth to be revealed, not merely in terms of an intellectual appreciation of God's logic and beauty, but more vitally— sometimes even as a sunburst of spiritual realization and healing.

If only our thirst for truth could be awakened and satisfied by some other way than a process of pain! If only such deeply spiritual experiences could occur without the catalyst of suffering!

Well, they can. We can experience the development of truth, the revelation of the Holy Ghost, by systematically preparing ourselves to receive it. This preparation requires such a strong desire for spiritual growth that one is willing to allow a settled way of life and thinking to change. Then rebirth begins, not by chance but as the result of the prayerful work.

This is quite different from merely "hoping" we will "get something out of" the church service, or lecture, or Christian Science Students Association meeting. Hoping is not enough; the reception of spiritual truth demands a spiritualization of thinking. It means freeing ourselves from the conscious and unconscious cliches of human existence that would harden our hearts and keep our vision of truth locked in the beauty of the fountain, in the sparkle of the water, in the promise of the words.

This became clear to me when I received an invitation to attend an address on Christian Science that promised to be particularly inspiring. I had attended other such events, and they had all been very pleasant experiences, but this time I wanted something more than comforting, encouraging words. I was thirstier than usual for the "water of life." This time I wanted a real spiritual breakthrough!

I realized that there would have to be some changes in the way I usually prepared for such meetings. Specifically, there would have to be changes in my concept of myself as a listener. I started by identifying myself as God's reflection, instead of a human being with strong tastes, opinions, and prejudices. I recognized in my spiritual selfhood evidences of divine Love and Spirit—of the Mind that was in Christ Jesus—such as innocence and harmony, purity and goodness, the qualities that logically belong to man, the individualized image and likeness of God.See Gen. 1:26, 27. The words and ideas of Hymn 291 from the Christian Science Hymnal, which begins,

Quiet, Lord, my froward heart,
Make me gentle, pure, and mild,
Upright, simple, free from art;
Make me as a little child . . .

Suggestions of self-condemnation— that I was not good enough, or advanced enough, or blessed enough to receive such inspiration—were rejected. Regardless of how negative aspects of human thought may have been historically associated with me, I knew that they didn't describe me at all. God, Love, had not given them to me. As God knew me, I was not a physique with a personal mind that would accept or reject thoughts according to education, environment, traditional beliefs, or what seemed my own self-centered interest. My thoughts could only be those that God was knowing!

From time to time, a little voice whispered that all this reordering of my conscious and unconscious thought through prayer was really a waste of time. What I would hear would be determined by the speaker, not by trying to make myself more receptive. Receptivity is so often supposed to be determined by circumstances, not by conscious effort.

This thought of separate minds influencing each other was also rejected. A Christian Science lecture, an association meeting, a Sunday School session, a church service—these are holy events. They are inspired by God, and when the listener is prepared to receive something from God, these activities will feel as special as they actually are. "Not personal intercommunion but divine law is the communicator of truth, health, and harmony to earth and humanity," Science and Health, p. 72. writes Mrs. Eddy in Science and Health. When one realizes that the message comes from God and not from the personal goodness or talents of the speaker, one will not only hear something that specifically meets the individual need but will also become aware of the unity—the oneness—of God and man.

The prayerful work in preparation for the meeting succeeded to such an extent that I was indeed deeply stirred by the message. I did feel the presence of the Christ, of which Science and Health declares, "Christ is the true idea voicing good, the divine message from God to men speaking to the human consciousness." Ibid., p. 332. It was not an emotional high, but a quiet, holy sense of peace, of gentle dominion, an absolute conviction of harmony.

Some time later I decided that it would be nice to feel that Christly presence again; so I started off on what I assumed was the same road I had traveled before. Now, I thought, I know how to do the work. It will be easy.

This time, however, my prayer became perfunctory, almost automatic. My heart really wasn't in it, and therefore my study and prayer became little more than an intellectual exercise. The first time I had been willing to surrender all personal sense to God. This second time around I naively thought that having once surrendered it, I surely had nothing more to give up. Human thinking, however, is rather like the air that is full of microscopic dust. Today's dusting removes today's dust, not tomorrow's.

I found that the human mind is loath to change if change means giving up one's unconsciously treasured prejudices and convictions. But it is precisely a willingness to change, to surrender every personal sensitivity to the divine Mind, God, that brings new light, fresh concepts, revived inspiration, and moral and physical healing.

The touch of the Christ would have been nice, but this time I really wasn't thirsting for it. And as Jesus said, "Blessed are they which do hunger and thirst after righteousness: for they shall be filled."Matt. 5:6. Obviously the degree of hunger and thirst determines how much we will eat and drink, and, frankly, I wasn't thirsty enough.

Once self-satisfaction is recognized as just another worthless aspect of mortal thinking, however, one will return again and again to the fountain of life, each time receiving fresh drafts. The thirst for truth is not based on lack as we usually think of human thirst. On the contrary, a thirst for spiritual things is an indication of fulfillment unfolding in consciousness. "All men shall be satisfied when they 'awake in His likeness,' and they never should be until then," Miscellaneous Writings, p. 358. writes Mrs. Eddy. Complacency is no state for the Christian Scientist.

Genuine preparation for the reception of Truth is work with spiritual sense, with the heart, not only with the intellect. One must be alert to the fact that intellect often tries to pose as something better, easier, more familiar, than one's spiritual sense. Spiritual sense is always fresh, perpetually new. And each experience with spiritual sense lifts one higher and shows new roads to be traveled. One never needs to commute back and forth along the same old highway!

Another aspect of preparation is the surrender of the thought that we already know a great deal about God and man as His reflection. Perhaps we have been students of Christian Science most of our lives, and we can readily recite entire pages from the textbook, Science and Health, and the Bible. But from this facility it cannot be concluded that one knows all, or even enough. Words are only sounds or symbols. It is the meanings of those words that count.

We all want fresh thoughts, enlarged views, but the study of the Christ Science is unlike any other line of study. Its old, well-known words do not express old, worn-out ideas. The words we have known "forever" clothe concepts that are as new today as we ourselves are new every day. We have never applied those ideas in this time or place or situation before, ever. This makes the ideas fresh to us.

Our openness to new ideas, even when they are dressed in familiar words, will let fresh inspiration flow into our lives in very practical ways. One will then no longer speak of church services, Christian Science lectures, or association meetings as merely "beautiful," but will speak of them as "rousing," "stirring," "uplifting," aglow with the very presence of the Christ. As we see this, we too can be included with those of whom Jesus said, "Blessed are your eyes, for they see: and your ears, for they hear." Matt. 13:16. 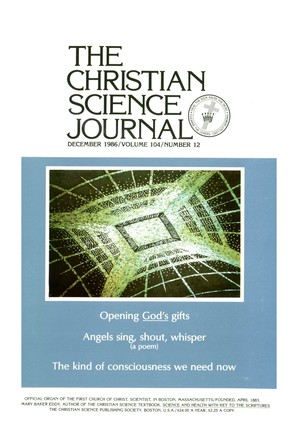 A thirst for truth!

"When my heart is overwhelmed"

Finding out the nothingness of evil

Unemployed? Not with God!

Teaching the littlest ones in Sunday School

A pastor for all the world

The Christ coming to you

The kind of consciousness we need now

Weapons for peacemaking: your integrity and spiritual purity