Most of us have had times in our lives when the routine ups and downs of life have been pushed aside by some new and drastic challenge. Perhaps we've suddenly run into fierce personal attack—hatred, prejudice, or unyielding opposition of some sort. It may almost seem we have been thrust back into a Biblical time of persecution, a time of lions' dens and fiery furnaces.

At such times there is need for rising to the occasion and finding we have the courage of a contemporary Daniel or Shadrach.

Right in the midst of such challenges it is possible to have the aid of two powerful helpers named Michael and Gabriel. Michael characterizes the spiritual strength that "fights the holy wars," and Gabriel expresses the tender presence of Love. Science and Health by Mrs. Eddy explains how they can help.

"The Old Testament assigns to the angels, God's divine messages, different offices. Michael's characteristic is spiritual strength. He leads the hosts of heaven against the power of sin, Satan, and fights the holy wars. Gabriel has the more quiet task of imparting a sense of the ever-presence of ministering Love. These angels deliver us from the depths. Truth and Love come nearer in the hour of woe, when strong faith or spiritual strength wrestles and prevails through the understanding of God. The Gabriel of His presence has no contests. To infinite, ever-present Love, all is Love, and there is no error, no sin, sickness, nor death." Science and Health, pp. 566-567.

If we think of Michael and Gabriel in terms of "God's divine messages," as Mrs. Eddy has characterized them, we can see that the Gabriel presence was there in the lions' den with Daniel, causing him to love those lions. This message of God's ever-present love literally closed their mouths. He did not react to them nor hate them. If he had done so, the outcome of the story might have been quite different.

The Gabriel presence was right in the midst of the burning fiery furnace with the Hebrews, enabling them to see the vision of the "fourth man" (or angel, as some Bible commentators ' interpret the reference) walking with Shadrach, Meshach, and Abednego in that trial.

The Michael qualities were right with Moses when he walked into Pharaoh's court and demanded, "Let my people go." And Gabriel tenderly comforted him in the wilderness when the people turned against him.

The angel messages symbolized by Gabriel and Michael were certainly right there in the tomb, strengthening Jesus and impelling the resurrection.

Staying awake to this vision will not only bless
our ship—our Church—but will bless all others
sailing with us on the sea of life.

Today, we too can experience anew the presence and power of these strengthening spiritual intuitions in tangible ways. Why is it that always in the midst of the problem the Christ appears? Because the problem is the contradiction of the Christ that is already there. You cannot have a lie—unless Truth is there first.

At times such as these, it is important to be alert to the thoughts we are entertaining. Helpful lessons can be learned from the disciple Peter at the time of the crucifixion. Because Peter allowed his thought to be unguarded at this crucial time, it might be said that four erroneous states of consciousness governed his actions. Although he loved Jesus dearly and wanted to be loyal to him, he allowed himself to be used as a tool of evil suggestion.

First, in the garden of Gethsemane, when he should have been watching, his thought became dull and sleepy, apathetic to the great events that were taking place.

Second, when he did wake up and saw what was happening, he cut off the ear of the high priest's servant. He retaliated and reacted with anger, resentment, and self-justification.

Third, right at the time when he could have been supporting Jesus, he denied the Christ. He did not want to be involved. He did not want to commit himself to the cause he loved. He stayed on the sidelines through fear and was not willing to take a stand.

And, finally, as a result of all this, he went back to his nets, back to fishing. Accepting the suggestions of failure, he lost his vision, direction, and inspiration. He went back to previous ways, to familiar human activity, instead of advancing with courage, inspiration, and spiritual conviction. He mentally buried his head in the sand of familiarity with materialism.

Apathy. Reaction. Noncommitment. Loss of inspiration. These four suggestions of the carnal mind would beguile undefended thought as much today as in Peter's time. But the strength of Michael and the tender compassion of Gabriel entertained in thought dissolve and defeat these errors.

Jesus stood alone with God, shielding and guarding the world. Could it not be said that we, at this time, are called to follow his example? With Michael and Gabriel we too have the privilege of standing guard over our world. We have the sacred trust of praying and proving that evil, in whatever form it appears, cannot engulf our rights or those of our fellowman. Our Leader, Mrs. Eddy, writes, "I reluctantly foresee great danger threatening our nation,—imperialism, monopoly, and a lax system of religion." The First Church of Christ, Scientist, and Miscellany, p. 129.

Only a deeper, greater, more profound sense of love can meet our individual and collective challenges. This is not just emotional human love for other mortals. This is a recognition of "the ever-presence of ministering Love," the Love that is God. This is the "Gabriel of His presence" that "has no contests." It reveals to us that all are beloved, loving, and lovable. This is the love that says, "We love him, because he first loved us." I John 4:19. This is the Love that says: "Let Us (the divine I or Us) make man, see man, know man. ..." It disarms the accusative finger that identifies a "you" as an enemy, by seeing all from the standpoint of the divine "Us."

This is truly the very highest form of Christianity. It is the Love that is reflected through love. This love expands in ever-widening circles; it begins with the family, broadens to neighbors, enlarges to the community, and in its infinite elasticity embraces the world. This love regards no one as being a stranger. It encircles its enemies. In fact, the only method of destroying enemies is to love them into being friends.

Love—the Love that is God—is the hallmark of true Christianity. In the early Church the followers of Jesus were identified by their love. They were a community of people who loved—loved one another and their world. Jesus affirmed, "He that hath seen me hath seen the Father" John 14:9.—hath seen divine Love. We too can pray to manifest God's love more clearly. It is natural for man to love, because his very nature is created by God, Love.

Sometimes it is helpful to ask ourselves this question: "If I were the only way that people knew about God, would they know by my example that God is Love?" Love, indeed, liberates. It is the essence of healing and teaching and living. For an individual or a movement to live, it has to love. If it doesn't love—it dies.

Do you remember the instance in the Bible where Jesus and the disciples were in a ship and "there arose a great storm of wind, and the waves beat into the ship, so that it was now full"? See Mark 4:36-39. Jesus, the Bible tells us, was asleep. The disciples in their fear woke him. "And he arose, and rebuked the wind, and said unto the sea, Peace, be still. And the wind ceased, and there was a great calm."

Recently, when reading that passage, I found myself asking the question "Who was actually asleep in that boat?" Was it Jesus, or the disciples? In fact, it was actually the disciples who were asleep, dreaming that they were in stormtossed matter, at the mercy of material elements and forces, tossed to and fro by the winds of aggressive suggestions.

Jesus, on the other hand, was constantly awake to the truth of being—that man is not material, he is never at the mercy of outside forces, never subject to mortal law. He awoke the disciples to share his view—to experience his universe of peace without tribulation or trial. He literally took them out of the court of matter—the view of the material senses—and into the court of Spirit, where the evidence, the verdict, and the result were peace.

The Bible tells us that "there were also with him other little ships." His mission was both individual and collective. "The purpose of his great life-work extends through time and includes universal humanity," Mrs. Eddy explains in Science and Health. "Its Principle is infinite, reaching beyond the pale of a single period or of a limited following." Science and Health, pp. 328-329. The other little ships on that sea may never have been aware of how their freedom and peace came about, but they were included in Jesus' boundary-free demonstration.

Today, through Christian Science, we have the privilege of being witnesses to Christ, awakening mankind to the presence and peace of God's kingdom; to the fact that man is the beloved of God, divine Love, safe in the ark of Truth, not tossed about in materialism and subject to the winds of intolerance, misunderstanding, and hate. Staying awake to this vision will not only bless our ship—our Church—but will bless all others sailing with us on the sea of life.

Today, and the days to come, are full of blessings. The lions' dens, fiery furnaces, and storms at sea are opportunities to entertain and feel the presence of Michael's spiritual strength and Gabriel's ministering love.

We can go forth with the privilege of keeping watch and guarding our world, not falling for the ploys that beguiled Peter. Staying awake, not reacting or retaliating, we can be committed and retain our vision and inspiration, regardless of material sense evidence.

Michael and Gabriel are at work universally. Location does not limit their activity. They are as much at work in courtrooms, legislatures, city halls, and attorneys' offices as they are within our Church. They are giving spiritual strength to fight the holy wars and tender ministering Love to reassure and uphold. Their message can be heard by every listening ear. 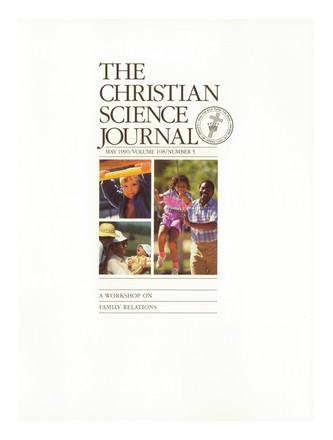 Stick with the rules of divine Science

Right from the heart

The courage of spiritual conviction

Overcoming fear of a relapse

The decision to be well

Class teaching and an answer to every prayer

Do you hear well?

Handling criticism within and without the movement

Christian theology that is more than a reasoning through...

For or against spiritual healing: where do we stand?

Parents, children, and healing: Why do Christian Scientists choose to rely on prayer?