A Quiet man was once "walking by the sea of Galilee" when he "saw two brethren, Simon called Peter, and Andrew his brother, casting a net into the sea." Matthew, in a brief account of this incident, writes simply that Simon and Andrew "were fishers."

Perhaps we too have walked along the shore of some bay or lake or sea and can visualize the setting of this interesting meeting so many years ago. We may recall how the clear, fresh breeze comes dancing in, how brightly the sun shines overhead, how the gentle waves roll in with a steady hum and run out on the waiting shore. Perhaps we have watched with interest the bobbing sails of some fishing vessels out on the blue waters. Some fishermen may even have been mending their nets on the little wharf beside us.

These two fishermen of long ago were casting their net into the sea when Jesus saw them. It was where they lived and earned their livelihood, there by the sea: making and mending their nets, casting them into the sea, drawing them in, and marketing their catch. According to the Gospel of John, Jesus had already discerned their spiritual receptivity— their honesty, sincerity, integrity, teachableness, stability—and now he gave them a wonderful invitation. "Follow me," he said, "and I will make you fishers of men." Instantly they recognized the call of the Christ, for "they straightway left their nets, and followed him." "Straightway" they "left their nets," their human occupation and possessions. What wonderful faith and perception!

Matthew then records that Jesus "saw other two brethren, James... and John his brother, in a ship with Zebedee their father, mending their nets; and he called them. And they immediately left the ship and their father, and followed him." Again, this wonderful faith and perception!

There was no period of indecision with these brothers. There was no human weighing of consequences, no questions between them, such as: "Do you think we should follow him? We have a good business here, our home, our father, our friends, all are here. Can we afford to leave our trade, our nets, and go with this teacher? Perhaps in two or three years we might be in a position to consider it, but not just now." And they might sadly have shaken their heads in refusal. They might have been content daily to haul in a supply of fish for the market, but had they remained with their nets, the world would never have heard of these four. The record is very brief, but in it are disclosed the quickness and willingness with which they accepted the Master's call.

In the case of these four fishermen, it was their material occupation and possessions which they were called to leave. Had they clung with closed fingers to their nets, they would have missed the grandest experience that could have come to them—that of being a student of the master Metaphysician, being taught by him, hearing his inspired words about God and man, and witnessing such deeds as had not been seen before.

Although the incidents just related occurred many centuries ago, as the world counts time, yet they hold a marvelous lesson and inspiration for us today. The Christ is ever calling to men, "Follow me." Mrs. Eddy says (Science and Health with Key to the Scriptures, p. 332), "Christ is the true idea voicing good, the divine message from God to men speaking to the human consciousness." She says here also that the Christ is "the Way, the Truth, and the Life, healing the sick and casting out evils, destroying sin, disease, and death."

Most of us have heard this call of the Christ, "Follow me." Who has not heard a "divine message from God to men speaking to the human consciousness"? But can it always be said that we have left our "nets" and straightway followed Christ, Truth? Have we been known to make excuses and justify delays, much as did those in the parable which Jesus recounted, who gave various reasons for their failure to accept the kindly invitation of "a certain man" who had asked many to "a great supper"? Or do we hasten to follow as quickly and as understandingly as possible? We are not all fishermen. In our case it may be that we are not called upon to leave our occupation or home, but the Christ, "the true idea voicing good," is ever calling men to leave their false thinking, to cease fearing, criticizing, hating, to stop being self-centered, self-righteous. In our own heart do we not sometimes recognize in these "nets"—be they large or small— some bondage which is keeping us from progressing spiritually?

Broadly speaking, are not our "nets" those very qualities of the carnal mind which keep us from following the spiritually mental way which the Christ points out? The material nets, with which these fishermen might have remained, are not the only nets to which men have been known to cling when the Christ calls. There are nets, not composed of knotted cords, but of fear, temper, pride, envy, sickness, sorrow, apathy, mental laziness, egotism. Surely "the divine message from God to men" ever bids one to leave these nets, and leave them immediately, for men cannot serve God, good, and error. While they cling to these "nets" with a tenacity worthy of a higher cause, how can they leave them and follow? No one can help us leave our nets so quickly as we ourselves, by prompt decisions based on Principle.

We must therefore be alert to recognize the arguments which would tempt us to continue in mortal mind's ways of thinking, talking, and living. Individually we can make an effort to cease from these errors and let the spirit of Love permeate our consciousness, words, and the minutiae of living. As we willingly leave these nets and straightway follow the Christ, there is no power which can hinder us. We find that the particular "net" which seemed to be ours has been left far behind. And here is an important point: no one is ever concerned as to what becomes of these nets. The important thing is that the fishermen by the Sea of Galilee left them and left them "immediately."

Sometimes, however, when we recognize a particular error and still are not willing to leave it, divine Love forces us to accept the good. A young man, who felt that he was becoming rather mature to be delivering telegraph messages, seemed afraid to leave this early calling for broader fields. One day his bicycle was stolen. Christian Science help was asked for, but after two weeks of earnest work, his bicycle was still missing. So tightly did he cling to the belief that he must have his bicycle to earn his living that several weeks passed before he realized that perhaps he did not have to remain a messenger boy indefinitely. He mentally let go of his bicycle; and very soon a position was presented to him which was more in line with his talents, besides offering advancement.

If we have a net to leave, let us, under divine guidance, do it "straightway" and "immediately." Had the disciples so chosen, their nets could have held them just where they were the rest of their days. Our net may seem to have us in its grip just as this lad's belief about his bicycle was holding him. But let us remember that the moment comes when that which is unlike God, good, must be left behind. If pride,resentment, restlessness, wrong desires, apathy, bad habits, are entangling, let us be done with clinging with tightened, frightened, unenlightened grasp to these "nets." Let us leave them, without another thought, high and dry upon some forsaken shore.

If this seems a large demand, an honest and more persistent study of the Bible and the Christian Science textbook, together with a sincere endeavor actively to become more Christlike in thought and deed, will show us how joyously to leave our "nets" and to obey the onward, upward, and silent call of the Christ, "Follow me." 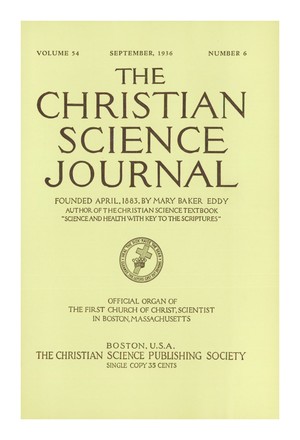 THE HOLY CITY UPON EARTH

By THE MARQUIS OF LOTHIAN | September 1936

WITNESSING TO THE TRUTH

"THE CAMERA OF DIVINE MIND"

GOD'S LAW OF DEMAND AND SUPPLY

THE CROWN OF REJOICING

THE VERSIONS OF AQUILA, SYMMACHUS, AND THEODOTION