Thoughts we hold shape our lives. Spiritual ideas, when grappled with and understood, are even more transformative, as the biblical patriarch Jacob demonstrated when he wrestled with an angel, or message from God.

Grandson of Abraham, Jacob had an important role in the development of monotheism. But he started out thinking he had to wrestle his way to the top to attain the good in life. He induced his twin brother, Esau, to sell him his birthright. Then, at the bidding of his mother, who recognized God’s plan for Jacob, he caused his father to give him the blessing normally reserved for the elder son. When this resulted in Esau seeking to kill him, Jacob fled to Haran to live with his uncle, Laban. Jacob fell in love with his beautiful cousin, Rachel, and agreed to serve Laban seven years for her. But at the wedding, he was tricked into marrying Rachel’s elder sister, Leah. Jacob promised to serve Laban another seven years for Rachel. After twenty years of service to Laban and building up his own wealth, he obeyed God’s directive to return to Canaan.

As Jacob approached his homeland, messengers told him that Esau was coming to meet him with four hundred men. In great fear, Jacob divided his people and his flocks and herds into two bands. After arranging for gifts to be sent to his brother, Jacob was alone at night, and the Bible records, “there wrestled a man with him until the breaking of the day” (Genesis 32:24).

Jacob was alone, struggling with thoughts of mortal existence. Running away from his family had only temporarily solved his problems. In the long, heart-wrenching, fear-filled hours of darkness before meeting his brother, he wrestled the angel, and his higher, spiritual nature was revealed. Christian Science reveals God as One—infinite, omnipresent good—and man (everyone) as God’s perfect, spiritual expression of good alone. As he wrestled with the angel, Jacob experienced something of this spiritual understanding.

In Science and Health with Key to the Scriptures, Mary Baker Eddy writes of him: “Jacob was alone, wrestling with error,—struggling with a mortal sense of life, substance, and intelligence as existent in matter with its false pleasures and pains,—when an angel, a message from Truth and Love, appeared to him and smote the sinew, or strength, of his error, till he saw its unreality; and Truth, being thereby understood, gave him spiritual strength in this Peniel of divine Science. Then said the spiritual evangel: ‘Let me go, for the day breaketh;’ that is, the light of Truth and Love dawns upon thee. But the patriarch, perceiving his error and his need of help, did not loosen his hold upon this glorious light until his nature was transformed” (p. 308).

At first he struggled from a dualistic point of view—from thinking of himself as having both a good and sinful side. But once the angel appeared to him and he united with that angel idea of good alone, he was able to see his royal selfhood, and eventually to bless a whole nation.

Science and Health continues: “The result of Jacob’s struggle thus appeared. He had conquered material error with the understanding of Spirit and of spiritual power. This changed the man. He was no longer called Jacob, but Israel,—a prince of God, or a soldier of God, who had fought a good fight. He was to become the father of those, who through earnest striving followed his demonstration of the power of Spirit over the material senses; and the children of earth who followed his example were to be called the children of Israel, until the Messiah should rename them” (p. 309).

It is angels that lead us to healing, not our own cunning.

Have we been mesmerized into thinking that both evil and good are real, that Christian Science doesn’t always heal, or that we need to forge ahead using will-power or manipulation? If you ever feel weighed down with error and finally alone, an angel awaits you. It is angels that lead us to healing, not our own cunning. Eddy defines angels as “God’s thoughts passing to man; spiritual intuitions, pure and perfect; the inspiration of goodness, purity, and immortality, counteracting all evil, sensuality, and mortality” (Science and Health, p. 581).

Like Jacob, when challenged we must wrestle with and hold to the angel of our spiritual sense and keep at it “until the breaking of the day”—until we gain a new, enlightened view of spiritual reality. Jacob refused to let the angel go until it blessed him. He didn’t halt this work of spiritual wrestling to pick it up in the morning, but continued praying until Truth dawned and revealed the powerlessness of the error, the mortal sense of life, which had governed him. To wrestle until the blessing dawns demonstrates our worthiness of a new name, too.

How do these angels of Truth work? What helps us see Truth and find blessing and healing in the midst of problems? To begin with, I find it helpful to honestly ask myself, Am I identifying this as “my problem”? Am I talking about it, even to myself? Personally identifying with a problem gives it fuel to develop, in belief, into what we fear. As Job said, “For the thing which I greatly feared is come upon me, and that which I was afraid of is come unto me” (Job 3:25).

We must not be tricked into praying “so hard” that a problem is inflated and the healing Truth is covered in anxiety. This is the dualism that takes from us the prize of healing. To wrestle the angel we must drop fear and thoughts of a physical condition and clasp absolute, divine Truth as the only truth and as all action. It’s not us but the spotlight on Truth that heals. Blessings dawn as one holds tightly to the good one knows is true. Jacob showed how coming to grips with the angel of Truth completely obliterates error.

Honor Truth by grappling with it. Don’t honor error or dualism—good and evil. Think from the basis of the all-presence of God, omni-active Truth, and go forward with a heart full of repentance and love for God that willingly yields to Truth. When we do this, blessings pour in, because the activity of Truth is continuous and productive. Good is dynamic and progressive. As Eddy writes, “God expresses in man the infinite idea forever developing itself, broadening and rising higher and higher from a boundless basis” (Science and Health, p. 258).

Jacob’s growth out of a mortal sense of “self” led to him finding his real, royal selfhood as God’s spiritual child, abundantly blessed. The material wealth and status he had formerly attained were nothing compared with the blessing he received when he united with the angel, grasped the nature of God, Spirit, and saw his own nature as God’s spiritual reflection. At the end of this experience, he said, “I have seen God face to face, and my life is preserved” (Genesis 32:30).

This dawn of spiritual understanding was apparently wide enough to include Esau as well, for when the dear brothers met, they clung to each other and wept. “I have seen thy face, as though I had seen the face of God,” Jacob told Esau (Genesis 33:10).

The angel of Truth that guided Jacob and those who followed in his footsteps is still a dynamic force, guiding willing hearts today out of self and human will. A royal selfhood is inherent in each of us, and as we unite with God’s idea, His angels remind us of what we really are, right here and now.

A friend confided to me that after listening sympathetically to a friend of hers who said she was dealing with a health problem considered serious, my friend was concerned and found the same symptoms manifest in herself. But she turned away from fear and gave her attention instead to the concept of “omni-action” as one of the definitions of good in the Glossary of Science and Health (see p. 587). Omni-active good is dynamic, the ever-active Truth. My friend reasoned that since God is omni-active, Truth is true because it is the universal Principle that functions unspent, not because we think it’s true. My friend grappled with this angel idea of omni-active Truth until she felt at peace. The disturbing symptoms soon disappeared and have not returned.

To grapple with an idea of God as tiny as a mustard seed, and to nourish that good seed, has an invaluable effect. Jesus said, “The kingdom of heaven is like to a grain of mustard seed, which a man took, and sowed in his field: which indeed is the least of all seeds: but when it is grown, it is the greatest among herbs, and becometh a tree, so that the birds of the air come and lodge in the branches thereof” (Matthew 13:31, 32). The truth one grapples with may seem small in the beginning, but with care and watering, it grows exponentially into a magnificent tree, which shelters a whole populace of life.

Each of us will always have an angel, for each of us is God’s beloved idea, and God’s ideas are forever nourished by ever-active Truth. Clasp ahold of the angel, the idea of Truth God sends you. Understand it, love it, and make it yours. And don’t let it go until it blesses you! If a night of wrestling seems never-ending, persevere, for your dawn is coming. “The very circumstance, which your suffering sense deems wrathful and afflictive, Love can make an angel entertained unawares” (Science and Health, p. 574). 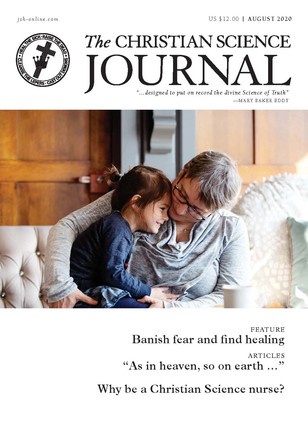