What a joyous, inspiring, and encouraging commemoration Easter is! It’s a time when the world is reminded that Life is indestructible and everlasting. We owe an immeasurable debt of gratitude to Christ Jesus for showing us this unchanging divine fact, which he proved to the world after evidently dying on the cross after a brutal crucifixion. Arising from death, he walked out of his tomb alive and strong and joined his desolate disciples.

How did all this happen?

Jesus had a unique entry into human existence with the virgin birth. He lived an unsurpassed experience while he was here. And he had an incomparable exit through his ascension. He lived his whole life differently from anyone else. He was the Way-shower, showing his followers how to live as he did.

Christ Jesus could do this because he did not live in the same mental and spiritual place as those around him. He saw life differently, and he healed wherever he went as a result of where he dwelt—in divine consciousness. He said, “My kingdom is not of this world” (John 18:36).

So if his kingdom was not of this world, where did he live? He told his followers, “I and my Father are one” (John 10:30). We learn from this that Jesus was living with His Father, with God; and he was seeing what God sees—God’s own spiritual creation—as “very good” (Genesis 1:31). Jesus perceived the abundance and perfection of God’s goodness everywhere, including seeing everyone as the real man God had created in His own image and likeness.

To the extent that we are mentally living in a material world, surrounded by material beings and things, we see things materially. We see birth, disease, discord, and death. We see beginnings and endings, good and bad. We see and live in a world of mortality. But Jesus came to awaken mankind to see God’s world of harmony, perfection, freedom, and peace—a world entirely separate from the dream world of mortal living. Paul stated this so clearly, speaking of “our Saviour Jesus Christ, who hath abolished death, and hath brought life and immortality to light” (II Timothy 1:10).

Jesus’ resurrection is the most outstanding and indisputable example of life and immortality being brought to light. His victory over death gave full and convincing proof of the immortality of God’s kingdom and presence. Jesus lived in the consciousness of that immortal kingdom and divine presence while he walked the hills of Galilee, healing the sick and raising the dead—and it was the same indestructible Life expressed in the man Jesus after his crucifixion and resurrection from the dead. He was still living in the same kingdom, the kingdom of heaven!

This kingdom is not a place, but rather the divine consciousness, where all God’s ideas are harmonious, whole, and eternal, and all reflect the perfection and flawless goodness of their Maker, God. This kingdom contains no discord, no disease, no sin, and no death. It is pure, unchanging harmony.

Mary Baker Eddy, the Discoverer of Christian Science, writes: “Jesus’ true and conscious being never left heaven for earth. It abode forever above, even while mortals believed it was here” (No and Yes, p. 36). So Jesus always lived mentally and spiritually in heaven—abode there forever—before, during, and after the time mortals perceived him as a mortal walking among them on the earth. He was abiding in the heavenly consciousness in which he identified himself and all those around him as immortal, whole, and perfect.

So what is immortality, this timeless message of Easter? It is the quality of existing forever, wholly spiritual, exempt from decay or death; it is life destined to endure without end, because it has existed forever.

The holy thread running through Christ Jesus’ healing and teaching is immortality. He recognized his own preexistence when he said, “Before Abraham was, I am” (John 8:58). And in that saying “I and my Father are one,” he outlined his unchanging immortal identity as coexistent with God.

Mortal consciousness says that life is like a piece of string, with birth at one end and death at the other. But Christian Science, following the example of Christ Jesus, defines Life as immortal and eternal, without beginning or ending. The chief cornerstone in this teaching is that Life, God, which has existed forever, is not subject to death, and therefore the spiritual, real man—Life’s expression—has no birth or death.

A material sense of life contradicts this and says: “But I am here, living as a mortal. I was born X number of years ago, and at some time in the future I will die. How can you say that I was never born and will never die?” But we can identify with these words in the Bible: “The Lord possessed me in the beginning of his way, before his works of old. I was set up from everlasting, from the beginning, or ever the earth was.… When he prepared the heavens, I was there” (Proverbs 8:22, 23, 27).

Just before Jesus’ crucifixion he prayed, “Now, O Father, glorify thou me with thine own self with the glory which I had with thee before the world was” (John 17:5). This clear statement of his preexistence and of the eternal inseparability of God and man revealed to the world that man is birthless and deathless—forever pure, perfect, and uncontaminated. And in numerous places in the Christian Science textbook, Science and Health with Key to the Scriptures, Mrs. Eddy uses words such as “no birth, no material life, and no death” (p. 288) and “never born and never dying” (p. 258). This is a complete description of man’s immortality, which must be acknowledged in order to live and heal as Christ Jesus did.

Mrs. Eddy also made clear: “You can never demonstrate spirituality until you declare yourself to be immortal and understand that you are so. Christian Science is absolute; it is neither behind the point of perfection nor advancing towards it; it is at this point and must be practised therefrom. Unless you fully perceive that you are the child of God, hence perfect, you have no Principle to demonstrate and no rule for its demonstration” (The First Church of Christ, Scientist, and Miscellany, p. 242). Understanding our unchanging immortal status enables us to demonstrate over beliefs of hereditary childhood diseases, teenage traumas, life changes, and all the impositions of old age. What a sense of dominion and freedom comes with this insight!

So Easter time is a time for rejoicing in the uplifting inspiration of resurrection and the immortality of man that Jesus revealed to the world; it is a time to hear the angel’s message, “He is not here: for he is risen” (Matthew 28:6). He is where he has always been, at one with his Father in heaven, demonstrating for all mankind and for all time that Life is eternal and man is immortal. And the Christ, the immortal Truth he demonstrated, is here with us—for us to demonstrate now and forever.

The message of Easter could be summed up in these words from Science and Health: “Divine Science rolls back the clouds of error with the light of Truth, and lifts the curtain on man as never born and as never dying, but as coexistent with his creator” (p. 557).

Easter is a time to be grateful for Christ Jesus’ unparalleled example of our true life and its immortality being brought to light! 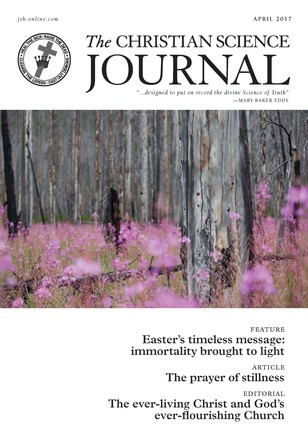