I recently attended a truly inspiring meeting that focused on the theme of the Lord’s Prayer. It got me thinking about the radical healing power of all sincere prayer, and took me back to an experience I had years ago when I was a student at the University of Illinois.

It was a time of great unrest, as students across the United States and around the world staged antiwar protests and demonstrations against the Vietnam conflict. It was around the time of one midweek Christian Science testimony meeting that several students at Kent State had been killed and wounded when National Guardsmen opened fire during campus demonstrations.

As our testimony meeting concluded, we went out to the foyer to discover that a large mass of student protesters had formed outside and rocks—some even from the CSO’s own rock gardens—were breaking windows at the Armory across the street.

Several protesters tried to gain access to our building, and our ushers were forced to bar the doors. We went upstairs to the sun deck and saw below that from every direction came a sea of chanting protesters, just as armed National Guardsmen filed off a bus—blocking off the street. I recall seeing their faces, mostly young men not much older than I was—looking just as frightened and uncertain as I was. I remember thinking that it must be the same feeling as seeing yourself helpless in the path of an oncoming tornado. I began to tremble—so gripped by fear that I was unable even to speak.

Up until that evening the Daily Prayer had been for me just a sweet little prayer everyone recited at the beginning of church usher meetings.

Our CSO group knew instinctively that we needed to take action—but a different kind of action from what was going on outside. We needed to pray. The First Reader led us in the Lord’s Prayer and the 91st Psalm—and we recited the Daily Prayer together (see Mary Baker Eddy, Church Manual, p. 41). Up until that evening, the Daily Prayer had been for me just a sweet little prayer everyone recited at the beginning of church usher meetings. But as we prayed it together that night, it suddenly became an extremely powerful healing declaration of what was urgently needed: a sense of God’s omnipotent presence—the “reign” not of violence, chaos, or anarchy, but of Truth, Life, and Love, ruling out any sinful sense; and that God’s word enriches the affections of all mankind and governs them.

A few suggested appropriate hymns from the Christian Science Hymnal, and we interspersed the singing with appropriate verses from the Bible, and other writings by Mary Baker Eddy, alternately read by the students and the Reader. After two or three hymns, I was able to stop shaking and my voice returned, so I could join in the singing without just mouthing the words. A sense of divine power and a tangible peace filled the room, as we continued praying. Then a knock came at the door. It was a TV reporter, asking permission to use our phone to call in an eyewitness report to the local television station.

When I returned to my dormitory later that evening, I went down to the TV room to listen to the 10 o’clock news. There was that same reporter, with his call-in report stating that the largest and potentially most violent of all campus protests that spring had erupted outside the University’s Armory building, where angry protesters had thrown rocks through windows. He reported that campus police and the National Guard were summoned to the scene. But to the surprise of all, the demonstration suddenly became peaceful and the large crowds began to disperse—as spontaneously as they had formed. Everyone simply went home, with no further incidents.

But the part I remember most was that in the background of the reporter’s report was the sound of our group in the next room singing “Mother’s Evening Prayer” by Mary Baker Eddy: “O gentle presence, peace and joy and power; / O Life divine, that owns each waiting hour …” (Christian Science Hymnal, No. 207).

That moment has stayed with me after all the years, as I saw and felt just how effective unified prayer really is. A few years later my work took me to Germany, where there is a tradition that when church congregations are uniting in the Lord’s Prayer, whether during a church service, wedding, baptism, or other religious ceremony, the church bells are briefly rung at that moment. This is perhaps done in other countries as well, but for me it is a reminder that whenever I hear church bells, to pray.

I have experienced firsthand what an ever-present power for good prayer is, and how it can unite us around the world in our countless expressions of gratitude to God.

David Tasa is Principal Trumpet of the Frankfurt Opera Orchestra in Frankfurt, Germany. 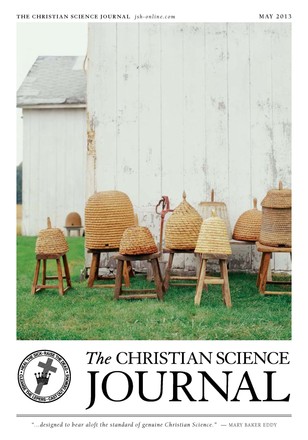 Ann Croft interviewed by the Journal’s Rosalie E. Dunbar | May 2013

The harmony of Soul

What can we give to others?

By Mónica Esefer Passaglia | May 2013

From heart to heart

Some thoughts on thought

Breaking the yoke of aging

Notice to members of The Mother Church

No ‘cycles’ of spiritual womanhood