Mrs. Eddy writes in Science and Health: "There is no power apart from God. Omnipotence has all-power, and to acknowledge any other power is to dishonor God."  Science and Health, p. 228. Some may feel that this is a bold statement and a difficult one to prove when all the evidence before our eyes is contrary to what is good and a situation seems hopeless. How do we prove that there is no power apart from God?

The many mighty proofs of the power of God, good, over evil related in the Bible give us in the first instance the proof that God is omnipotent; and secondly, they give us the courage and inspiration to want to prove this power for ourselves.

Christian Science reveals that there is an unseen, all-powerful law of Love governing the entire universe, including man. But to avail ourselves of this power, we must open our thought to its presence and be willing to conform our thinking and actions so that they come under its rule. In doing so we experience the operation of divine law. This automatically begins to annul any evil that seems to be real. The power of God, once it is understood, completely annuls every form of error; yet it is so gentle that when one turns to it one experiences harmony naturally.

Erroneous situations arise from believing that our existence is confined to a material body that controls us, believing that conditions outside ourselves determine whether our bodies are sick or well, whether we are failing or progressing in our business, and believing that our life fluctuates as day-by-day situations are either harmonious or discordant. Christian Science teaches us how to correct these false beliefs.

To be harmonious and thereby prove God's omnipotence demands a change of thought; it requires one to be willing to let go of a sense of mortality, to lift one's thinking into higher, spiritual realms, to see oneself and others as God made us; in other words, to see God's creation. For instance, to see oneself as a mortal, with or without a problem, will not heal, but to see oneself as the image of God, spiritual, perfect, and free, therefore expressing all the qualities of God, does heal.

Man is not a material body encasing a mind; man's very being is in God. Man lives because Life is God and this Life is reflected by man. We do not prove this to be true through a physical process but through spiritualization of our thinking. What we accept in consciousness determines our harmony. This is why a change of thought, not a change of circumstances or place, is needed before healing can be gained.

We have to let go of a false sense of self and all the errors that go along with this false ego, gently allowing Mind, the only intelligence, to take over our thinking. Mrs. Eddy says, "The understanding that the Ego is Mind, and that there is but one Mind or intelligence, begins at once to destroy the errors of mortal sense and to supply the truth of immortal sense."  p. 216.

Christ Jesus acknowledged that he could of his own self do nothing, but that it was the Father which did the work. As we do this we feel the presence of the Father, Love; and the power of God becomes apparent. Our daily and hourly work is to realize there is one power, one God, one Mind, which is manifest everywhere and is all there is. It should be remembered that because God is omnipotent there cannot be a lack of God's power anywhere.

We need never be in subjection to anything erroneous, but we must utilize our God-given authority and challenge evil, seeing it as a lie because not of God. Sometimes this challenging needs to be done in a very vigorous way, but once challenged and seen to be nothing, error can have no effect on our lives.

Realizing that any evidence of the physical senses is false is the first step in destroying it. Mrs. Eddy states, "Corporeal sense defrauds and lies; it breaks all the commands of the Mosaic Decalogue to meet its own demands."  p. 489. We must reverse every one of error's suggestions and find in Truth the counterfact of the erroneous thought. This needs to be done until we become so conscious of God that we lose sight of a discordant situation.

As we continually keep our thoughts lifted to God, listening all the while for guidance and inspiration and maintaining this position until we become conscious of His holy presence, we lose all sense of responsibility. Mortal sense drops away, and we realize with loving reverence that God has complete control. Peace is felt, and with deep humility we are aware of God's divine ever-presence. We are willing to let His will be done, and healing results.

The writer had a lovely experience to prove these facts. After she and her daughter had driven their car along a beach, the car became embedded in deep mud. They were on a very lonely part of the beach, and the tide was coming in and would reach them in about half an hour. The situation seemed desperate. A few people saw their plight and came to offer assistance. Although they tried every known method to release the car, the more they tried, the more firmly embedded the car became.

Faith in God's power to help was taxed to the utmost, but the writer's trust never wavered, and she continually told the people God would release the car. Erroneous suggestion was continually voiced in such remarks as: "It is useless; only last week an ice-cream van became stuck and was a total loss; the week before two cars were also total losses." Each time these evil suggestions were met with declarations of Truth, and the erroneous thoughts were dealt with as powerless and not able to have any effect.

When the sea was only a few yards away, the writer turned her back on it and walked away in an all-out effort to clear her thinking and reach God. She told herself she must not condemn her daughter for disobeying her instructions to turn the car round when she had told her to. Then error whispered that she was as much to blame as her daughter, for she should have been firmer with her. But this was also steadfastly denied, for she knew that since God didn't condemn, neither should she. She reasoned that Love only loved; and Love was omniaction. This sense of all-pervading Love became so clear to her that as she looked at the sea she realized it had no power of its own but was controlled by God. If necessary, the sea would be held up until the car was freed. She saw that nothing rightfully hers could be taken away from her.

All sense of responsibility had now dropped away, and a sense of thrilling joy had replaced the fear. A few words from a loved Bible verse came to her. They were, "Underneath are the everlasting arms."  Deut. 33:27. A deep sense of God's power enveloped her, and she was conscious of the unseen presence of God right there. By this time she was back at the car. Then a man appeared who had not been there before. He ordered everyone to get round the car and shake and lift it. Although this operation had been carried out many times previously with no success, this time the car came up out of the deep mud, and on the third try was lifted on to flat sand. Someone drove it up the beach to safety.

The writer was so full of gratitude to God and so conscious of His presence that she wasn't aware of anything else. A few moments later, when with her daughter she was impelled to look back, she saw the sea, which had been very calm, suddenly come in with a rush; and huge waves covered the whole place where they had been. Driftwood, which they had used and which was sticking up about a foot, was now completely covered.

The magnitude of God's allness suddenly struck both of them. It made them feel very humble in His presence, and they realized in far greater degree that God did indeed control everything and that nothing could stand in the way of His power and presence. This sense of the power of God left a faith in God that has never wavered.

Not a single thing needs to be a disaster. We can use every event as a grand opportunity to go up higher and prove that God's power has dominion over all forms of evil. 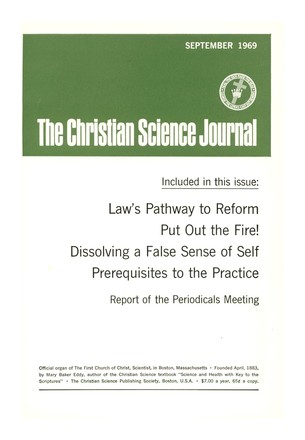 Put Out the Fire!

Dissolving a False Sense of Self

Are We Cheerful Givers?

Prerequisites to the Practice

"According to his riches"

Serving with Our Hearts

The Forces of Good