A: This By-Law is really all about a prospective pupil’s Christian curriculum vitae (résumé). During the interview and application process for class, I think it’s important for the teacher to discern whether the pupil has these most important qualifications for instruction in Christian Science: a desire to live a full Christian life, to have a thought and life that tends Godward, and the motive to learn more about God in order to help and heal others.

While having a “good past record” might suggest that an applicant has to have lived a spotless life, with no mistakes or lapses, this is surely not the case! The prodigal son didn’t exactly live a pure life, yet there came a point where “he came to himself” and had an overwhelming desire to return to his father’s house (see Luke 15:11–24).

All the time the son was in a “far country,” apparently away from the father’s influence, the seeds of spiritual desire were there and active, and caused him to turn from his waywardness and take rapid steps toward his father. At his homecoming he was welcomed by his father with open arms.

The role of the Christian Science teacher is to recognize through spiritual intuition those seeds of spiritual desire in a prospective pupil, even though the individual may have had a “far country” experience, and to welcome that repentant, humble, Godlike individual back to the Father’s house. Mary Baker Eddy emphasizes that the only record each of us really has is spiritual when she writes: “The harmony and immortality of man are intact. We should look away from the opposite supposition that man is created materially, and turn our gaze to the spiritual record of creation, to that which should be engraved on the understanding and heart ‘with the point of a diamond’ and the pen of an angel” (Science and Health with Key to the Scriptures, p. 521).

To have a proclivity for something means to have a natural inclination, predisposition, or tendency toward it. So the pupil with promising proclivities toward Christian Science shows signs of being able to accept fresh, spiritual ideas, and a willingness and ability to learn and practice the Science of the Christ in order to serve others, rather than simply to keep himself well. These qualities do not have to be fully developed, but the seedlings must be there so that the teacher can help nurture them into full bloom.

When one is planting seeds, the soil has to be well prepared in order for the seeds to take root and produce fruit. In the same way the soil of thought needs to be fertile, well nourished, ready to accept the good seed of Truth, and the elements that would choke it out—selfishness, egotism, pride, and so on—guarded against. Mrs. Eddy wrote, “In the soil of an ‘honest and good heart’ the seed must be sown; else it beareth not much fruit, for the swinish element in human nature uproots it” (Science and Health, p. 272).

When Jesus selected his disciples, he chose people who had promise as healers, who demonstrated a degree of humility, childlike receptivity, and faithfulness. While they each struggled with human failings, they had in common their hunger and thirst for the truth, and a desire to follow Jesus’ teachings. In his parable of the sower Jesus said that this was the good ground on which the seed, the word of God, would grow “and bring forth fruit with patience” (Luke 8:15). And this is the good ground the Christian Science teacher looks for in a pupil when considering him or her for Christian Science class instruction.

Jill Gooding is a Christian Science practitioner and teacher in Surrey, England. 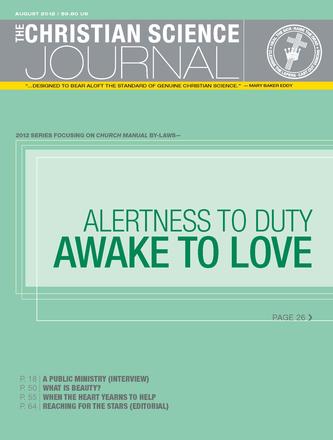 What did it represent that Moses and Elijah appear with Jesus in the transfiguration?

Why can’t I find a practitioner able to put an end to the problem?

Can you explain the phrase "cycles of divine light"?

The Christian Science Board of Directors goes to Africa

A call to pray

What does it mean to have a good past record, and to have "promising proclivities" toward Christian Science?

Healing of symptoms associated with cancer

My most valuable possession