When Christ Jesus comforted his disciples with the words, "Peace I leave with you, my peace I give unto you: not as the world giveth, give I unto you," john 14:27; he surely must have referred to the power of Love, God, to confer a peace that is more than the mere tranquillity of a material sense of things. His many exhortations to love one's brother indicate that this peace consists of the confident awareness that the power of divine Love, which always governed his thought and motivated his acts, is forever with us all in every generation to guide and protect us.

Human will seeks to classify love and to channel it into forms and goals that are, to say the least, self-serving. It is said to be good business or just common sense to place our favors and affections where they will do us the most good. Selfishness is not novel to this age but seems to be a major trait that even the earliest teachings of the Bible were meant to destroy.

Abraham realized a large measure of peace when he unselfishly told his nephew, Lot: "Let there be no strife, I pray thee, between me and thee, and between my herdmen and thy herdmen; for we be brethren. . . . Separate thyself, I pray thee, from me: if thou wilt take the left hand, then I will go to the right; or if thou depart to the right hand, then I will go to the left." Gen. 13:8,9;

Abraham knew with certainty that the power of the Almighty was available to care for him wherever he went. Surely it must have been the knowledge of this power that Jesus imparted to his disciples. Even human affection is known to be potent, but the love of God is omnipotent. Although this power is ever available, it is the work of the Christian Scientist to embody it by expressing the qualities of Love.

The potency of Love is seen to impart the divine impetus that is Life-giving and Truth-revealing. Spiritual power has acted compassionately throughout the past and will act eternally as a divine law, such as divided the Red Sea, closed the mouth of lions, annulled the heat of a fiery furnace, fed multitudes, healed the sick, and raised the dead.

Power is most frequently thought of as the exertion of a force requiring some reserve of physical strength, a stored-up ability to act. Christian Science reveals power to be not latent but innate, not common but unique, not vacillating but omnipresent—the very nature of Love, which of necessity is constantly expressing itself in man, God's image and likeness.

How natural for a child to look to its parent for care and protection! And how unquestioningly a loving parent will give it! Was it not in this light that Peter advised, "Humble yourselves . . . under the mighty hand of God, that he may exalt you in due time: casting all your care upon him; for he careth for you"?I Pet. 5:6, 7; We too may place our hand in God's, and His love will bring into our experience the evidence of His power.

Material sense, crying "I am man," seems ever to resist humility. But is this not inevitable? Arrogance, stubbornness, and a self-willed determination to have its way would perpetuate material sense through self-righteousness and self -justification. Humility denies all selfishness and ultimates in the destruction of the illusion of a so called mortal mind. Humility is as essential as the evidence of the power of Love is desirable, and it is the channel through which this power flows.

The testimony of material sense must be seen to be an illusion, a lie about man, in order to bring to light the power of God and the evidence of His love. Jesus was able to individualize God's power. Mrs. Eddy states: "Jesus beheld in Science the perfect man, who appeared to him where sinning mortal man appears to mortals. In this perfect man the Saviour saw God's own likeness, and this correct view of man healed the sick." Science and Health, pp. 476, 477; It required humility, constantly lived, for Jesus to detach the claims of mortal mind from his concept of man in order to walk upon the waves or to heal the sick.

Mrs. Eddy writes: "The heart that beats mostly for self is seldom alight with love. To live so as to keep human consciousness in constant relation with the divine, the spiritual, and the eternal, is to individualize infinite power; and this is Christian Science."The First Church of Christ, Scientist, and Miscellany, p. 160;

Since God is constantly pouring forth His love, and man, His image, expresses this love, we must endeavor to demonstrate this truth in our lives.

A student of Christian Science, while driving his car, had stopped to make a left turn at the intersection of two country roads. Another car, coming toward him at a high rate of speed around a curve, was on the wrong side of the road and hit his car head-on. The cars were both damaged beyond repair.

The student with some effort extricated himself from his car and sat by the roadside. He was dazed and seemed to be losing consciousness. He prayed and worked as he had been taught to do in Christian Science, but he noted little or no result from his efforts to pray. His thought seemed dominated by resentment for the carelessness of the other man. Two or three times people came to him with the statement, "The other man is dead."

Suddenly his consciousness was inspired by the thought that he must love that other man. Gladly he did so, and his thought cleared proportionately. He worked to see the true identity of all men as children of God and to behold "in Science the perfect man," right where an injured mortal appeared to be. By the time the ambulance arrived, someone called out: "He is alive. He will be all right!" The evidence before the senses had changed.

Police officers insisted that the student be taken to a hospital in the ambulance. At this point he declared that he was a Christian Scientist and got up from the stretcher and walked to a telephone booth to call a friend to come after him. Upon the arrival of his friend, he thanked the hospital employees and released them from further responsibility, and drove away praising God for His loving power in the face of what had appeared to be several internal and external injuries. The next day he was able to drive another car alone to his home over one hundred miles away, having proved completely that divine Love is omnipotent and ever available. He was told that the other man was soon dismissed from the hospital.

When we allow Truth and Love to penetrate the obduracy of mortal mind, such as the self-will, self-justification, and re-sentiment of material sense, and to reveal the purity and perfection of Spirit—the harmony of God likeness—the testimony of the false senses changes.

Through the teaching of Christian Science mankind may learn how to reflect the power of divine Love. Sincere students of this Science are daily proving the demonstrability of this power, for "the weapons of our warfare are not carnal, but mighty through God to the pulling down of strong holds."II Cor. 10:4. The potency of divine Love can always overcome the strongholds of the false material senses. 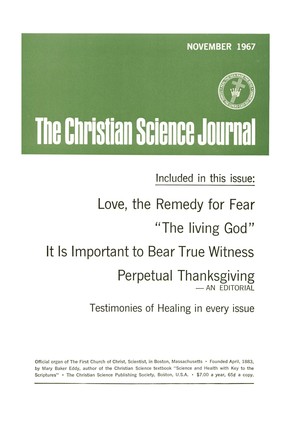 What Is Unique in Christian Science Healing?

"What cannot God do?"

Love, the Remedy for Fear

The Results of Righteousness

It Is Important to Bear True Witness

The Potency of Love

"AS THE WATERS COVER THE SEA"

Solomon, Builder and Dedicator of the Temple