One Saturday afternoon I was doing some yardwork when, in a moment of supreme carelessness, I caught my right hand in a piece of heavy machinery. The pain was nearly incapacitating, and my pointer finger had been deeply cut.

Instinctively, I walked quickly toward the house and into the kitchen, declaring out loud that God was present with me. I wrapped my hand in several paper towels.

Despite the severity of the situation, I knew from experience that I could expect healing through prayer and that God could bring me peace.

One thing that came to me was Mary Baker Eddy’s poem “Mother’s Evening Prayer,” which begins, “O gentle presence, peace and joy and power” (Poems, p. 4). Although there was nothing gentle about what had happened to me, I felt God’s loving presence, and I knew that I could claim my divine right to “peace and joy and power,” right there. The third line of the poem refers to God this way: “Thou Love that guards the nestling’s faltering flight!” I recognized that although it might have seemed that I had faltered, God, divine Love, had been guarding me in that very moment.

I wished to reach out to a Christian Science practitioner for prayerful support, but I lacked the strength to get to my phone. Still, I actively felt God’s care, and as it happened, my mother, who is a Christian Science practitioner, was already on her way to visit me. When she arrived (about twenty minutes after the accident), I asked her to pray for me. This metaphysical support was palpable—the pain continued to decrease, and while it did not depart altogether, after several minutes I told her that I felt ready to bandage my hand.

While my mother drove down the road to purchase some gauze, I relocated to the dining room, where I was able to access Concord (an online research tool that includes the Bible, Mary Baker Eddy’s published writings, and the Christian Science hymnals) on my laptop.

I recognized that there were several fears I needed to get a handle on. One of these was that it might take a long time for the pointer finger to heal. I refuted this fear strongly with the knowledge that healing in Christian Science is not dependent upon material conditions. I also felt a conviction that Christian Science treatment not only would be effective but also would not leave any negative side effects, such as scarring or disfigurement.

Based on what I had seen at the time of the accident, I was concerned that the nail on my pointer finger might be lost. And because of the depth of the cut, I found myself wondering if there might be long-term damage to the feeling in my finger. This was particularly alarming since, as a pianist, I rely upon the natural functioning of my hands as a major part of what I do.

The following passage I came across in Concord was particularly helpful to me: “There is no fear in love; but perfect love casteth out fear” (I John 4:18). I knew that only divine Love was in control, and that I did not need to be impressed by the fearful thoughts.

When I read in Ephesians, “Put on the whole armour of God, that ye may be able to stand against the wiles of the devil” (6:11), I resolved to take up that spiritual protection; I refused to accept as legitimate “the devil,” or the false notion that my true identity was material and vulnerable.

Typing with my left hand, I created a folder in the Concord program to collect these ideas. I called the folder “Healing”—I was so sure that this was what was happening in my experience, and that this would be the final outcome. I held firm in the “gentle presence” of God’s care.

That evening and the following day were very peaceful and prayer-filled. I was able to participate as Second Reader in the Sunday service of my branch Church of Christ, Scientist. This was a holy time. Throughout the day the pain continued to diminish.

By the evening, it was time to replace the rather large bandage my mother had helped put on my finger. I was amazed to discover two things: first, the cut, which had come from a run-in with a dirty and greasy piece of machinery and which I had only been able to minimally rinse prior to bandaging, was completely clean; and second, the wound—which thirty hours earlier had required wrapping my entire finger—could now be covered by just a single large Band-Aid. The nail was intact, and the healing was advanced. I rejoiced and reported the dramatic progress to my mother.

I knew in that moment that the healing presence of the Christ had been powerfully demonstrated in my experience. I had no doubt that all echoes of the accident would dissolve in a similarly accelerated fashion. This indeed proved to be the case.

That next week’s Bible Lesson from the Christian Science Quarterly contained this passage from Science and Health with Key to the Scriptures: “If man is governed by the law of divine Mind, his body is in submission to everlasting Life and Truth and Love” (Mary Baker Eddy, p. 216). I knew that I could let God, divine Mind, inform my understanding of my identity as God’s flawless spiritual reflection. I fully expected complete healing.

On Monday, the sensitivity in my finger was still pronounced. Nevertheless, when on Tuesday evening I was called upon to help a friend carry a kitchen table up two flights of stairs, I was able to do so without problems. At a certain point that week the pain, which had been persistent—if muted and constantly reducing—simply went away altogether. The following Sunday, I discovered that the wound had completely closed.

Grateful for the dramatic and speedy progress, I continued to rejoice in this evidence that as God’s beloved child I was truly kept “on upward wing,” another idea I cherished from Mrs. Eddy’s poem “Mother’s Evening Prayer.” At some point the following week all unnatural sensitivity in my finger had dissolved.

Just over three months from the incident in my backyard, I performed the world premiere of a fifty-minute piece of music written by a good friend. This activity required countless hours of practicing and rehearsal. I would not have been able to give that performance if there were any lingering issues with my finger.

I am so grateful for this meaningful proof that regardless of any material picture, we are never outside of God’s care. 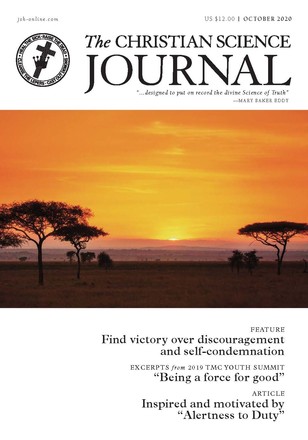 Find victory over discouragement and self-condemnation

“Being a force for good”: Excerpts from 2019 TMC Youth Summit

Inspired and motivated by “Alertness to Duty”

Spirituality: The essential basis of morality

Finding our home away from home

Looking “behind the scenes” with biography

Nothing is ever lost

United in heaven and on earth

The year of perfect attendance