IN divine Mind, the first and only cause, there is no process of destruction. Mind corrects and instructs the human consciousness through enlightenment, not through punishment or destruction. A willingness to be instructed and governed entirely by Mind, divine Principle, would remove from human living the painful experiences that come through belief in a destructive force or element.

In correcting a mistake in mathematical computation one does not destroy any number, since the mistake results from false belief about numbers. The only possible correction of a mistake in mathematical computation is through enlightenment of thought as to the value of the numbers and their relation to one another. Ignorance is dispelled by understanding; and thereby a correct solution of the problem is found.

The mortal sense of destruction, with its painful or terrorizing process, is produced by the mistaken belief that life, substance, intelligence, and sensation are resident in matter and are subject to the supposititious laws of matter, in other words, by the belief in an imperfect ego apart from and independent of the one infinite Ego, God or good.

The beliefs of time, human history, and the errors of physiological and religious education seem to have solidified this superstitious myth of life in matter into unyielding, implacable, and cruel laws; but these so-called laws are merely errors of belief, the nothingness of ignorance, to be dispelled through enlightenment—not through continuing to evolve more so-called laws in the same realm of belief. This latter error is illustrated by the mode of destruction as witnessed in methods of warfare. For instance, the armor plate of a battleship is made of sufficient strength and thickness to resist the power of the guns in current use; and then perhaps another gun is made powerful enough to pierce the armor plate, and so the futile round goes on. Much chemical research is being devoted to the discovering of supposedly more destructive elements, and civilization is thus constantly faced with methods of destruction. Are not the many proclaimed victories over the so-called material elements the successive ascendancy of one belief over another belief culminating in the self-destruction of materiality, its dissolution before the veritable forces or genuine power?

Does not the pride of the human mind seeking science in senseless matter illustrate that saying of Jesus, "If therefore the light that is in thee be darkness, how great is that darkness"? But he also said, "If therefore thine eye be single, thy whole body shall be full of light." The enlightenment which speeds true progress must be spiritual enlightenment, always and only in the realm of spiritual reality, where alone the facts of being are to be found, evolved, and understood. As this process of spiritual enlightenment goes on, the wonders or miracles performed, the proofs given, will be wrought in the realm of spiritualized thought, and through the mode of blessing and healing as demonstrated by Christ Jesus. Then, as Mrs. Eddy has written in the textbook, "Science and Health with Key to the Scriptures" (p. 209), "Material substances or mundane formations, astronomical calculations, and all the paraphernalia of speculative theories, based on the hypothesis of material law or life and intelligence resident in matter, will ultimately vanish, swallowed up in the infinite calculus of Spirit."

This enlightenment comes only through the attainment of goodness, that is, the displacing of the carnal mind with the divine Mind. Spiritual values have to be sought for, apprehended, appreciated, cherished, and incorporated into thinking and living. Research must be in the realm of Mind—metaphysical, not physical. Our efforts must be directed towards the attainment of spiritual qualities, not towards the attainment of knowledge based on false material premises, nor towards the accumulation of material wealth or the indulgence of worldliness.

Jesus declared, "I am the way, the truth, and the life: no man cometh unto the Father, but by me." The way of Jesus was not to accumulate more and more material knowledge or matter, but to gain more and more freedom from matter and the bondage of material beliefs, until finally he ascended above all claims of limitation. He showed us that real freedom can never be attained through or in matter, but must be gained through spiritual vision, through the recognition of Spirit as the only substance, through the understanding which brings final ascension out of matter, not through destruction or death, but through spiritual enlightenment and the reflected purity of Life.

What but his transcendent goodness, his consciousness of at-one-ment with his Father and our Father, infinite good, gave Jesus dominion over all the earth! On Miscellaneous Writings, pages 360 and 361 of "Miscellaneous Writings" our Leader says, "No advancing modes of human mind made Jesus; rather was it their subjugation, and the pure heart that sees God." So today it is not knowledge of so-called physical laws, astronomical calculations, or the illusive essence of mortal mind called electricity which gives us dominion, but the acquiring of "the mind of Christ." Dominion is won by the displacing of lust with chastity, greed with generosity, impurity with purity, blind force with love, self-will with divine will, superstition with spiritual understanding. It is goodness outshining evil. Then appears to clarified vision the great wonder—the spiritual nature of the universe, the infinitude of good, the omnipotence of Spirit and its laws.

When this goal of goodness is sought and won, then and only then will men emulate the works of Jesus: walk on the water, be at once in the place whither they would go, heal the sick, feed the multitude, and raise the dead. There will then be no danger of destruction, no element of evil in human activities, for those activities will reflect the entirely good and blessed will of God, who is Love. Each will say, as did Jesus, "I can of mine own self do nothing;" and, "The Son can do nothing of himself, but what he seeth the Father do: for what things soever he doeth, these also doeth the Son likewise." Dominion, which will be not over evil —for evil will be seen as nonexistent —will consist in the unfolding understanding of God, good, and of His power to express His own ideas in their divine completeness of beauty, order, sublimity, and immortality. The truth of the statement found in our textbook will be understood (p. 78), "God is not in the medley where matter cares for matter, where spiritism makes many gods, and hypnotism and electricity are claimed to be the agents of God's government."

Mind, God, is self-existent, self-expressd, self-acting, and by its own light illumines the universe. Mind needs none of the material element, electricity, to convey or to transport its ideas. Mind speaks and the "still small voice" of Truth is heard by every receptive heart. Belief dwells only in the realm of belief. Its counterfeit signs and wonders remain in the realm of substanceless matter, wholly apart from the realm of reality. Jesus said, "I am the light of the world: he that followeth me shall not walk in darkness, but shall have the light of life."

Upon those who have been instructed in this truth, the Science of Christianity or Christian Science, rests the grave yet none the less joyous responsibility of maintaining the light of that Science unconfused with and undimmed by the wonders of so-called physical science. The days of those wonders will eventually be superseded by the universal enlightenment of Spirit and the true understanding of the creator or causation, as Love, from which emanates not a single element that can destroy or be destroyed. Already the mental darkness, the fear of destruction, with its attendant shadows of sin, disease, poverty, and death, is disappearing in the light of the spiritual understanding of divine, omnipotent Love, and progress is leading into a recognition of the earth that God hath made, "wherein dwelleth righteousness"—the kingdom of heaven.

Copyright, 1934, by The Christian Science Publishing Society, One, Norway Street, Boston, Massachusetts. Entered at Boston post office as second-class matter. Acceptance for mailing at a special rate of postage provided for in section 1103, Act of October 3, 1917, authorized on July 11, 1918.

The things that I care for most in the church to which I belong are not those which divide us from other Christians, but those which unite us to them. 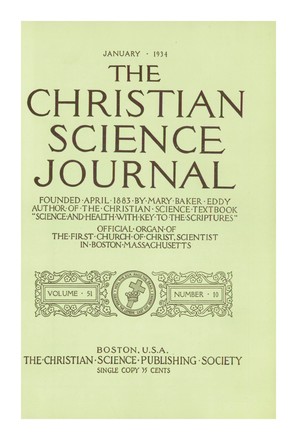 THE ISOLATION OF ERROR

MRS. EDDY AS AN AUTHOR

Of Joel and his time we know...