This interview was adapted from a JSH-Online.com audio podcast titled “Supporting elections with prayer.” It initially was a conversation between Christian Science practitioners George Moffett and Ned Odegaard, along with Audio Producer Rita Polatin. George’s portion was largely based on an article he wrote for the October 24, 2016, issue of the Christian Science Sentinel called “Healing divisive partisanship.” Here we feature adapted excerpts from Ned’s portion of the interview.

Ned Odegaard: One of the mental currents that seems to be so strong today is the feeling that our vote doesn’t matter, that what we do or think doesn’t matter. Interestingly, though, our thoughts are what really matter, because the human experience is the result of individual and collective thoughts.

The reason we pray is that prayer is uniquely the only thing that actually goes to the root of the issue, which is the need to spiritualize thought.

Our thoughts actually matter a lot.

The basis of prayer in Christian Science is that as our thoughts are more closely aligned with the reality of God’s thoughts, which include harmony, selflessness, and constant, uninterrupted love, then these qualities find their way into our human experience in actual, tangible ways. So our thoughts actually matter a lot.

It’s also important to turn to God for direction, but for me that’s sometimes easier said than done. One of the things that can trip me up, in being able to hear what God is imparting, is when I feel so strongly about something myself.

Rita Polatin: Well, I think that leads into this next question about how some people are very passionate about politics, and actually become very emotional and divisive when they talk about it. How can we see beyond the emotionalism that divides people?

I’m learning that having a very strong sense of one’s own rightness includes an equally strong sense of the wrongness of others who have different or opposing views. If this way of thinking grows unchecked, as we are sometimes seeing today, it can lead to hatred and even violence.

I do. I had a job one time where I had a series of very clear responsibilities, and I felt that the organization, and some individuals, were not doing the right thing. I even felt that in some cases there was a legal question. But as I went about taking the human footsteps to determine what was right, I could feel almost a physical welling up in my chest, of righteous indignation. When I realized that’s what it was, I stopped myself short.

In Mary Baker Eddy’s writings, I found a very brief few sentences where she said: “Be temperate in thought, word, and deed. Meekness and temperance are the jewels of Love, set in wisdom.” And this is the phrase that really caught my eye: “Restrain untempered zeal. ‘Learn to labor and to wait.’ Of old the children of Israel were saved by patient waiting” (Retrospection and Introspection, p. 79).

We can resist the mental current of fundamentalism that has this extreme sense of the rightness of one’s own view and the wrongness of others’ views.

I began to see that “untempered zeal” was resulting in this feeling of righteous indignation. That, in turn, brought me to “A Rule for Motives and Acts” in the Manual of The Mother Church. Mrs. Eddy felt this was so important that she asked that it be read the first Sunday of each month during the church service. Part of it reads: “Neither animosity nor mere personal attachment should impel the motives or acts of the members of The Mother Church. In Science, divine Love alone governs man; and a Christian Scientist reflects the sweet amenities of Love, in rebuking sin, in true brotherliness, charitableness, and forgiveness” (Mary Baker Eddy, p. 40).

To me, this very direct set of instructions provides a structure for daily correction of our thought, to restrain untempered zeal, to resist the mental current of fundamentalism that has this extreme sense of the rightness of one’s own view and the wrongness of others’ views. These prayers work; prayer changes thought, and thought changes behavior. That was true in my own case, and I know that opportunity exists for all of us as citizens.

I think it’s tempting for us to feel that meekness or moderation is an acquired skill, but because God is Spirit, and we reflect God, we are therefore spiritual and meekness is natural to us. That is what we are, and how we are. It is our nature.

So, all of us can have meekness and temperance, and what it does in the end is, it really unites us instead of dividing us.

In her Miscellaneous Writings 1883–1896, Mrs. Eddy says that “God is our Father and our Mother, our Minister and the great Physician: …” (p. 151). I’ve used that in a prayer, often, to say that God is fathering me, God is mothering me, God is ministering to me, and God is healing me as my Physician. That is, to me, a complete statement of God’s care for me, His direction and guidance for me. Even if I make mistakes, God in His ministering, and fathering, and mothering, will redirect me in whatever way best fulfills His holy plan for all mankind. If I am praying to know that for myself, then I can pray to know that is true for everyone else, too. 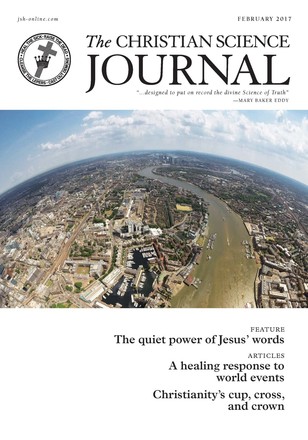 The quiet power of Jesus’ words

A healing response to world events

We are never stuck in a maze

The lie of evil unmasked

Revelation for a Reader

Severe hip and back pain healed

Mental surgery opens the way for a family

From suffering and self-pity to healing